Smart technology applied to the water supply in rural Uganda 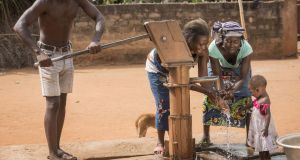 Multiple wells can be connected to a single base station as far as 15km away.

An innovation partnership facilitated by the Enterprise Ireland Wisar Technology Gateway has resulted in the development of a water well pump monitoring solution for deployment in Uganda.

Based in Letterkenny Institute of Technology, Wisar specialises in providing internet of things (IoT) solutions to Irish industry.

The solution has its origins in a visit to Africa by Wisar board member Ray Speer of semiconductor giant Analog Devices. “He came back with an idea having seen the problem,” explains Wisar manager Stephen Seawright. “In East Africa, it is very common for several villages to share water from a single bore-hole using a manual pump. When a pump breaks down, the villagers resort to drinking unsafe water from ponds and lakes so there is a requirement to monitor the status of the pump and, if possible, build in a level of predictive maintenance.”

That in turn led Clare-based company CW Applied Technology in partnership with Analog Devices to ask Wisar to investigate the feasibility of incorporating electronics powered by renewable energy into the pump including an appropriate communication method to transfer data from the pump to the cloud. They were joined in the request by an Irish charity, Fields of Life, which supplies the pumps to the villages.

CW Applied Technology is an independent electronics contract manufacturing service company that specialises in small to medium size builds, from prototypes up to commercialised volume production.

Funded by an Innovation Partnership feasibility grant from Enterprise Ireland, WiSAR investigated the state of the art in water well management. Competitor products were researched, and a product requirements specification developed for the India Mark II pump commonly used in Africa.

Methods to detect and measure waterflow were investigated and a solution proposed for further development. Of critical importance is for the sensor to be connected to the cloud and powered by a battery with a multi-year lifetime. This resulted in low-power wide area communications being selected as the connection technology with the power supply enhanced by energy harvesting such as a solar panel or energy scavenging from movement of the pump handle.

“Enterprise Ireland put in funding to develop the monitoring device and the software around it and the expectation is that CW Applied Technology will manufacture it,” says Seawright. “Analog Devices put in some money as well. Arup came on board and put in money and time. VT Networks runs Sigfox low power IoT network in Ireland and this is the first roll out of that technology in Uganda.”

The prototype solution has been deployed in Uganda and has been proven to work. “The sensor monitors the usage of the pumps,” says Seawright. “It sends an alert if the handle breaks or if it is likely to break. Before this, people would end up drinking dirty water or have none at all when the pump broke. The sensor is powered by a battery recharged by a small solar panel. It is designed to last three years.

“VT Networks supplied the Sigfox base station,” he adds. “The sensors send tiny bits of data which are compressed into small packets and send to the base station.”

Multiple wells can be connected to a single base station as far as 15km away.

“Arup put in engineering time as well as funding,” says Seawright. “They are designing the dashboard to collect the data from the pump as well as other relevant data on things like weather conditions. Now that the prototype has been proven to work in the trial, we are now working on improvements such as cheap ways to get indications of water quality. The next step will be to manufacture the sensors in Ireland for the Fields of Life charity to put on the pump. That’s our ambition.”

“This interesting and impactful project opportunity came about in discussion between Analog Devices and WiSAR,” adds CW Applied Technology chief executive John O’Connell. “The technical feasibility study was instrumental in getting other parties on board with the ability to deliver field trials in Uganda. We look forward to the project delivering a practical solution which will improve the lives of some of the poorest people in the world.”