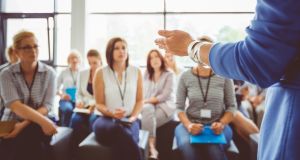 The Covid-19 induced global crisis has served to highlight the importance of good leadership at the same time as putting a spotlight on the shortcomings of some of those global figures who have found themselves in positions of authority. “Good management will become even more important in the coming years as we emerge from Covid-19,” says Prof Karan Sonpar of the UCD Smurfit School.

“That’s why we emphasise the importance of strategy and leadership in quite a few our programmes including the MSc in strategic management, the MSc in consultancy and our MBA programmes,” he adds.

His colleague Prof Federica Pazzaglia has looked at leadership during times of uncertainty and crisis. “I have done quite a bit of research on crises,” she says. “Every crisis is unique and during the last few decades we seem to be stumbling from crisis to crisis. Quite a bit of work has been done on the banking crisis and there are a lot of similarities in the way people reacted then and now in terms of not being prepared. People had never seen a pandemic like this before. It was the same with the banking crisis – people said they hadn’t seen anything like it before either.”

Sonpar argues that people should have been better prepared. “We had already seen MERS and Ebola and back in 2018 they were already warning about a potential pandemic,” he points out.

He also explains that it is not necessary to have detailed information on the challenge to respond to it. “There is a famous military incident where troops were sent on patrol but were gone for three days. The commanding officer became really worried, but they eventually returned saying they had got lost but then found a map which helped them get back to base. But then it was found that it was the wrong map. The wrong map can be better than no map. Leaders don’t necessarily have all the answers. They need to be able to explain what they are doing and why they are doing it.”

Pazzaglia emphasises the need to be decisive. “It is very important not to become paralysed. Leaders need to be strategic and keep generating options, but they can’t always wait for clarity before making a decision.”

According to Sonpar, having a clear objective helps. “In many cases the foremost goal will be the survival of the organisation. And leaders must operate on the principle of optimism that the organisation will survive. That means continuing to innovate to ensure that it doesn’t lose its competitive edge. Leaders need to communicate a sense of enthusiasm and optimism. As a leader, people want to believe you have a plan and can lead them out of the situation. People are looking for leadership and leaders have to step in front and show they are in control despite not having the full facts.”

There are two types of errors made by people, he continues, “errors of omission and commission. Errors of omissions are the worst. Leaders are the people who have the courage to make a call. There are ways to make decisions safer. If you get multiple opinions and options on the table early on and play out multiple scenarios, plans of action, and assumptions, this will make it safer. Look at the assumptions and likely consequences of each scenario. This creates a better capacity to make a better decision. Paralysis by analysis has to be avoided though. Companies which make decisions fast and are agile tend to be the ones which consider multiple options earlier. This gives them more confidence.

“Generally, the interpretation of the facts is not an issue. It’s being willing to act on it in the right manner. It’s not so much the case of the wrong answer but of getting the problem wrong.”

He warns against the pitfalls of bad people management policies. “Getting rid of employees can be bad for an organisation’s reputation,” he points out. “There is also an assumption that the people left behind will be grateful and happy. That is often not the case. Many people feel threatened by it.”

One way to guard against this is to focus on values. “Because there is such uncertainty, people feel vulnerable,” says Pazzaglia. “This presents a strong test of an organisation and its leaders. When the main objective is survival, people can forget their values. It is important in moments of crisis not to forget the organisation’s values, the reasons why it is in business, and why you became a leader. It is important to live our values. Don’t be shy of being upfront about them and don’t forget why you have them.”

And people can learn to be better leaders. “To lead is a verb, it has to be done. It’s absolutely fundamental to us, we all make leadership decisions. What is our capacity to lead? It is to harness a collective capacity to meet a shared objective. It’s about taking 1,000 people one step at a time, not taking one person a thousand steps. This can be learned on the job through reflection and debate. We also learn a lot from role models and in education. There are a lot of experienced people on our programmes and participants enjoy a visceral learning experience which helps them develop as leaders.”