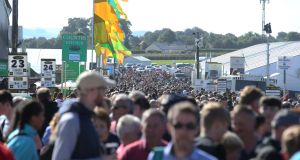 Technology capable of recognising individual cows, a portable diagnostic kit for vets, an automated livestock feeding system and a quick-fix solution for burst hydraulic hoses were just a few of the innovations on display at the Enterprise Ireland innovation arena at this year’s National Ploughing Championships. Now in its sixth year the innovation arena is firmly established as Ireland’s premier agritech event.

The innovation arena aims to showcase ground-breaking agritech products and act as a funnel for agritech innovation in Ireland. Another objective is to identify the agritech success stories of tomorrow.

“We want to find the individual entrepreneurs and start-up companies with high potential and support them to boost or accelerate their business’s growth,” says Enterprise Ireland senior regional development executive James Maloney. “We had 98 applicants from across the agriculture spectrum who wanted to take part this year. Our evaluation committee selected the top 50 entrants in June, and they were invited to exhibit as innovation arena finalists.”

The centrepiece of the event is the Enterprise Ireland Innovation Arena Awards which celebrate the very best in Ireland’s agritech sector. This year’s overall winner was Dairymaster for its Mission Control system. The Kerry company has introduced artificial intelligence to rotary milking and the new system’s features include ‘CowNow’, which is an advanced cow recognition system.

The OptiCruise technology incorporated into the design adjusts the speed of milking so that milking time is reduced by up to 30 per cent. It also identifies the history of each individual cow, predicts its milk out time and combines it with the milk out time of the cows already featured on the problem.

The Agri-Engineering Start-Up award went to the Cotter Crate of Abbeyfeale, Co Limerick. The Cotter Crate is a lamb-handling system that facilitates the safe, accurate, simple and quick administration of vaccines, anthelmintics and other necessary animal health products to lambs from three weeks of age.

“The product is designed to be used with a lamb chute which can be placed in front of a drafting crate,” says Maloney. “The innovation lies in how the lambs are safely and comfortably restrained in the crate. This allows the farmer or flock owner to administer multiple treatments both accurately and quickly.”

FarmEye of Oranmore, Co Galway, took the honours for Agri-Technology Start-Up. The company is aiming to secure a sustainable food supply for the next generation with its range of digital tools designed to support management systems on farms and in laboratories. The Farmeye Portal can be accessed via laptop, desktop or smartphone app and provides solutions for pasture-based agriculture and food processors who supply the major supermarket chains and must be fully up to date with all data related to traceability and sustainability.

The coveted One to Watch Award went to Beotanics of Stoneyford, Co Kilkenny. The company leads the way in the development of niche crops such as sweet potato, yacon and wasabi. The company applies non-GMO breeding practices to minority crops and the resulting varieties are now sold to growers all over the world. Beotanics is now an acknowledged expert in evolving food ingredients and new variety development with added nutrition and bio-actives.

“Plant genetics is an old science but Beotanics has put a new twist on it,” says Maloney. “They are now looking at what’s in the plants for alternative proteins for the food industry as well as supplying extracts to the pharmaceutical industry. They are mining plants for gold.”

The Anna May McHugh Female Leadership in Agriculture Perpetual Trophy was awarded to Keelings chief executive Caroline Keeling. “She is a hugely successful businesswoman leading a major business which has established a world-famous brand and employs 2,500 people in north county Dublin,” says Maloney.

“The Irish agritech sector is in a very good place,” he adds. “The industry now employs in the region of 4,300 people with the majority of those jobs located in the regions. The sector plays a critical role in underpinning the competitiveness of Ireland’s food industry and is now shifting through the gears to keep pace with advances being made globally. For the first time, more than €2 billion will be invested in global agritech this year and Ireland is very much part of that.”