Arts with impact making their presence felt at Ulster University 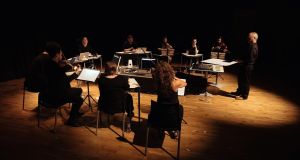 Alternative media in Turkey, the politics of fear in America, health communication, dance therapy for dementia sufferers, the impact of Brexit on museums, and the experience of first responders to terrorist attacks. These are just a few topics among an incredibly wide range being addressed by a newly established research centre for music, drama, film and heritage studies at Ulster University.

The centre was established as a result of activities around participatory, practice-based and practice-led arts research at the university, according to research director Dr Brian Bridges. “The centre brings together music, drama, film, heritage and museum studies and interdisciplinary connections including arts and health and wellbeing, applied arts, creative technologies, and so on,” he adds.

The centre has its origins in the UK Research Excellence Framework assessment carried out in 2014, Bridges says. The assessment saw Ulster ranked, for the first time, alongside or ahead of significant players in the specialist arts and conservatoire sector as well as the research university sector. This resulted in the grant of additional resources to enhance research within these subjects, as individual disciplines, and in interdisciplinary combinations.

“One particular focus of activities which sees common interest across the centre covers the applied arts, arts and health, wellbeing, community, inclusive, disability arts, and postconflict arts,” Bridges adds. And these activities have taken researchers into some quite unusual and interesting areas.

In music, Prof Frank Lyons has established the Inclusive Creativity project and initiative in collaboration with partners including Share Music Sweden, Drake Music Project and Walled City Music. “The project aims to level the playing field in performance and composition for disabled musicians by developing new technologies and methodologies for their use,” Bridge says.

The initiative has led to the development of an extensive cross-Border and international network as well as the establishment of the Open Youth Orchestra of Ireland, led by methodologies pioneered by Lyons at Ulster.

Lyons has founded and directed three inclusive ensembles over the years: the Wired Ensemble, founded in 2000; Acoustronic, founded in 2015; and NonZeroSum Ensemble in 2017. These groups feature disabled and non-disabled professional and amateur musicians performing in combined groups.

Prof Brian Irvine’s participatory music pieces also focus on inclusivity through the use of community-led ensembles and projects. His work includes Nest, which was commissioned by the London 2012 Cultural Olympiad. This became Northern Ireland’s largest-scale public art project featuring a collection of thousands of objects, with their associated life stories, gathered from the community, arranged in a warehouse in the Titanic quarter, and used as material for a composition featuring performances by the Ulster Orchestra and a 300-strong community choir.

At a very practical level, Dr Liz Doherty, a lecturer and researcher in traditional music, has pioneered the Safe Trad project to address injuries acquired by musicians as a result of playing trad music.

In drama, a team led by Dr Matt Jennings worked alongside researchers from the school of nursing on a project to utilise applied drama methodologies to assist with communications training for both student and qualified nurses. The centre also helps deliver training in role play and simulation to students in Social Work before going on work placements.

Guy Barriscale and An Grianán theatre company have performed an original theatre in health communication play Songbirds, which was developed in collaboration with Ulster University professors of nursing and psychology and is based on the experiences of people with dementia and their carers.

Sinead Devine and Mary Fitzpatrick have delivered the Tuned In project for children and adults with learning disabilities and work with the First Act youth theatre to deliver workshops and performances for mental health and conflict transformation.

Ailin Conant of Theatre Temoin, who is also director in residence of Peacebuilding Academy at The Playhouse, delivers masterclasses for students who will be cast members of her verbatim theatre production based on experiences of first responders to acts of violence during the Troubles.

Dance for the elderly

In other activities, the centre is involved in the delivery of student-led drama and dance projects for elderly people in residential care settings and for children with performances in local primary and secondary schools in Derry and at the Belfast Children’s Festival.

Bridges also highlights the academic research being carried out in the centre. “Drs Murat Akser and Victoria McCollum have recently co-edited a volume on Alternative Media in Contemporary Turkey which deals with protest and social media in Turkey, and McCollum has also edited a volume, Make America Hate Again: Trump-Era Horror and the Politics of Fear. Essentially, these two volumes highlight participatory connections between contemporary media, social media and contemporary politics.”