Invest in your brand to drive economic recovery 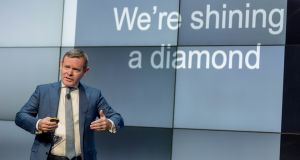 The webinar takes place on Thursday, 27th August from 9.30am to 11.30am, and includes speakers from some of the country’s best known organisations. Photograph: The 2019 seminar organised by IAPI and the Institute of Directors in Ireland.

Individuals know what to do to minimise the risk from Covid-19: wash hands and stay socially distanced.

A forthcoming webinar outlines what businesses must do to minimise the risk of Covid, both from the pandemic itself and the recession that follows it. The key to survival is to invest in your brand.

‘Branding: Vital for Ireland’s Economic Recovery’ takes place on Thursday, 27th August, from 9.30am to 11.30am, and includes speakers from some of the country’s best known organisations.

[To secure your place at this free, invitation-only webinar, email katherine@iapi.com]

It follows an inaugural joint seminar last year which explored the value of putting brand at the heart of a business’s financial strategy.

That event took place in Dublin and was massively oversubscribed. The benefit of this year’s move online is that “the sky is the limit” in terms of attendance numbers, says IAPI chief executive Charley Stoney, who is moderating it.

“I would urge CEOs and CFOs to attend so they can hear first-hand how to lead a ‘brand-led’ organisation into recovery,” says Stoney.

The advent of the pandemic, and the consequent recession – coined the ‘pandession’ by economist David McWilliams - comes on top of existing difficulties arising from Brexit. As a result, Irish businesses, and the Irish economy, face unprecedented challenges.

Cutting back is not the way forward

With the memory of the financial crisis still fresh in the minds of senior leaders, there is now a clear appreciation of the value of a strong brand to business resilience.

“This webinar is about exploring what businesses can do to turn things around in the face of appalling business conditions, focusing on the brand and the role it plays in the recovery,” says Stoney.

Speaker David McRedmond who, as chief executive officer of An Post, has led that organisation’s transformation programme and return to financial stability, revenue growth and profit.

An Post‘s brand purpose is to act for the common good, to improve the quality of life for everybody in Ireland. It has endeared itself to the nation through the current crisis as a result of initiatives such as having postal workers check in on elderly people, providing free postcards, and delivering newspapers to those cocooning.

Paul Kelly is the chief executive of Fáilte Ireland, the National Tourism Development Authority, which has generated enormous success for Ireland’s tourist industry by investing in rebranding initiatives such as the Wild Atlantic Way, Ireland’s Ancient East, Dublin and Ireland’s Hidden Heartlands.

Fáilte Ireland recently launched a new look, mobile optimised website, DiscoverIreland.ie, for domestic tourists. It follows from research by the tourist authority that found 60 per cent of Irish people plan a domestic break in the next six months.

Also speaking is Elaine Carey, who joined Three Ireland as head of sales in 2008, became chief commercial officer in 2013, and took on the combined UK and Ireland role in March of this year.

Her role includes devising and managing Three’s propositions and products portfolio, managing the retail footprint, overseeing ecommerce, customer care and all digital and brand activities along with the management of its prestigious partnership with Chelsea FC.

Three responded with empathy to the coronavirus lockdowns with its hugely empathetic Monster Hunter advertising campaign, featuring an anxious child and his cocooning grandfather connecting via mobile devices.

“Right now, in the middle of a pandemic and a recession, it is really important for companies to understand the value of brands and the vital role they play in helping to reboot the economy as we come out of it,” says Shenda Loughnane, group managing director of Dentsu Aegis Network Ireland, a media and digital marketing communications company, and president of IAPI.

“It is crucial that companies value and invest in brands now more than ever. In times of crisis, the temptation is to retrench and cut costs. But we know from research that companies that invest in their brands recover their growth faster after a recession.”

World-beating companies such as fast-moving consumer goods maker Procter and Gamble recognises this, which is why it recently announced its intention to grow its ad spend by 8 per cent, its first increase in four years.

A survey from the Institute of Directors shows directors are increasingly pessimistic about the Irish economy, with 61 per cent of business leaders believing the pandemic has the potential to have a significant impact on their organisations' bottom line for the year 2020.

“The idea of the webinar is to bring together CMOs, CFOs and CEOs, all of whom have a different perspective, and to hear from the participants too, in a Q&A session, about the contribution branding and marketing makes to the bottom line,” explains Thora Mackey of the Institute of Directors.

“With both the challenges of the pandemic and the impact of Brexit facing us, every business is looking very closely at what they’ve got, and how to maximise it.”

“Investment in your brand in a crisis maximises your market share, grows your business and, in turn, drives recovery in the economy. The webinar will get all the relevant stakeholders in the ‘room’, to discuss the role of our industry in driving the economic recovery. If everybody retrenches, this will be much harder to come out of. Now is the time to really understand your brand, to invest in it and build its value, in order to grow and accelerate out of this,” says Loughnane.

Crisis? Time to get creative

Rory Hamilton is executive creative director and co-founder of Boys + Girls, the self-described ‘branded entertainment agency’ that has worked with mobile company Three on a number of campaigns. It has communicated everything from Three’s success in transforming Arranmore Island so that people could return to work there, to Monster Hunter, a TV advert shot in lockdown by its two characters, on iPhone 11s.

The key to successful brand building is entertainment, says Hamilton. “If it’s entertainment, people pay much more attention to it. If you are able to smuggle your message into something people want to see, it will be so much more effective,” he explains.

It will be more cost effective too.  “If people pay much more attention, you only need to spend half as much on media.”

The current crisis is challenging many businesses.  It requires a creative response.

“With the pandemic, everyone was operating off the same playbook about ‘unprecedented times’. With Monster Hunter, we crafted an entertaining story instead. Something more engaging stays with you longer. It isn’t more expensive, it’s just more effective,” he says.

His agency set up during the last recession, in 2010. “We saw firsthand that the businesses that succeeded were the ones that invested in their brand. Creativity is always at its best when it is operating under some constraints. The Covid crisis means brands need to be more creative to stand out and to be valued by consumers, which, at the end of the day, is what brand value is all about.”

To secure your place at this free, invitation-only webinar, email katherine@iapi.com