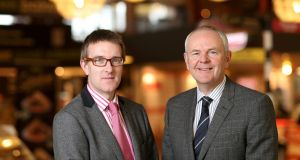 Earlier this year, Irish business people packed out the Aviva Stadium’s main conference hall for an Enterprise Ireland event entitled ‘Routes to Growth AsiaPac’. For many, the primary objective was to learn how to start selling into China by hearing from those already successfully doing so. They weren’t disappointed.

Speakers came from a wide range of sectors and included Mark Murphy, chief executive of Fenergo. The innovative fintech company, which has a global presence, began selling into China as a result of doing business with the overseas branches of banks such as Bank of China and ICBC.

Parc Aviation boss Frank Collins spoke about his company’s three offices in China, and told of the importance of investing both time and money to win business there. Barry Napier, chief executive of Cubic Telecom, talked about his company’s success using Hong Kong as a springboard to Australia, Singapore and Japan.

Very many Irish businesses are keen to follow in their contrails, something that is more easily done thanks to the advent this year of direct flights from Dublin to Hong Kong and Beijing.

With a population of more than 1.3 billion people and a rapidly growing middle class, the market potential there is enormous. While China’s One Belt One Road infrastructure initiative is the flagship, opportunities exist not just in construction and engineering but across a myriad of sectors.

In China, 51 per cent of all goods are bought online, with 80 per cent of all online sales coming via mobile. “What Chinese consumers are most interested in is health, nutrition, supplements and food, while the interest in organic is growing too. It’s all about quality, a move away from the cheap and cheerful up the value chain,” says Felim Meade of Emerald Green Consulting, a China cross-border ecommerce specialist.

Employers’ group Ibec is working to develop the significant opportunities for its members too, a fact reflected in its work with the Association of Chinese Enterprises in Ireland, the Irish China Business Association and Asia Matters, a think tank.

“From €2 billion in 2014, Ireland’s exports to China have risen dramatically to €5 billion in 2017. China is also benefitting from the Irish-China trade relationship as our imports have risen from €3.5 billion to €4.5 billion over the same period on the back of strong economic growth,” says Ibec chief executive Danny McCoy.

Together with prior work done by Ibec’s international team, he cites Asia Matters’ 2014 study on unlocking Asia’s trade potential for Ireland as a key recent milestone marking the take-off of Ireland’s exports. There is much further to go too, he reckons, as Ireland’s exports to this hugely important market remain “underweight” compared to China’s size and share of the global economy.

The launch of Ibec’s Aviation Leasing Ireland underlined its commitment to that growing market as does the fact that the attendant companies at a recent special lunch hosted by Ibec for Chinese companies included many aviation leasing companies. The business lobby group has also welcomed Chinese delegations from the technology, biopharma and fintech sectors.

“The fact that our last two events with Chinese companies were bilingual, with contributions from Ibec staff in Mandarin, underlines the seriousness of Ibec’s dedication to international business,” says McCoy.

The size of the Chinese market can be daunting. Ibec participated in a recent address at an event organised for a delegation from a single province of China, Jiangsu. With 80 million consumers, that province alone has the same population as Ireland’s largest eurozone trading partner, Germany.

The scale of such an opportunity requires preparation, relationship-building and patience. Partnership with local firms in China is a particularly favoured path of entry into the country, albeit one that has raised some contentious issues relating to trade and intellectual property rights.

“Representing as we do companies with global supply chains – in many of which Ireland and China are key links – Ibec is working to minimise any possible disruption to trade, not just from Brexit but also from growing uncertainty in relation to global trading conditions,” says McCoy.

“As a country that has kept faith with globalisation to become Europe’s fastest-growing economy, Ireland is in a very strong position to argue the case for free trade both in Europe and globally. Our voice on this issue may become an increasingly important one in the coming years.”