Irish companies of all sizes, and across a variety of sectors, are already succeeding in China. We catch up with four to find out about their activities there 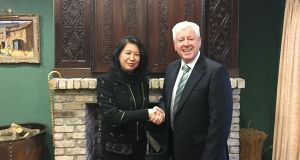 Kepak Group is a family-owned and innovative meat company with a rich heritage of more than 50 years of meat craft. From the establishment of a butcher shop in Dublin in 1966, Kepak today has a turnover of €1.5 billion and employs more than 5,000 people.

It has 15 manufacturing facilities throughout Ireland and the UK, with sales offices in Europe, the US, Asia and Africa. The Kepak Group markets a broad range of fresh and value-added meat products serving the food-service and retail markets

AgraKepak is the international trading division of Kepak Group and has been doing business in China and the rest of the Far East and south-east Asia for 15 years.

The growing importance of the Asian markets to the business led Kepak to open an office in China, located in Shanghai, in 2016. The office is managed and staffed by five Chinese nationals who intimately understand the needs of the Chinese market.

AgraKepak’s China team has many years’ experience supplying the market with quality beef, pork, fish, lamb and poultry. Kepak, thanks to its commercial office in Shanghai, is now well-positioned to begin building a strong market presence for its beef and pork in China.

Two of Kepak’s sites – Kepak Clonee and McCarren Meats (Kepak Cavan) – have been approved for exports to China. In May 2018, Kepak signed a five-year distribution contract valued at €35 million with China-based Esen Agro Group.

“It will be a valuable market for selected meat cuts that are a popular mainstay of Chinese cuisine and we at Kepak look forward to building on already strong relationships to create further business opportunities there. The opportunity that the Chinese market represents for us as an Irish meat producer and food innovator is incredible and we look forward to building on our already strong relationships there to create further business opportunities in the months and years ahead.”

Waterford-based PPI Adhesives was set up in 1971 by the late industrialist Heinz Pollmeier. Today, the still family-owned business has customers in more than 50 countries, including China.

It employs 123 people and produces an extensive and sophisticated range of technical adhesive tapes, laminates and die-cuts. These are used for a range of applications, mostly in the electrical, electronic, aerospace, automotive and medtech sectors.

Everything is manufactured in Waterford, with many of its products being custom-designed for individual customers. This has been a key ingredient in its success.

“A lot of the products we make here we would only have one customer for. Being innovative and flexible enables us to win against much larger competitors,” says managing director Dermot O’Callaghan.

In his export orientation, the late Pollmeier was a man ahead of his time. PPI Adhesives opened an office in Hong Kong back in 1993, followed by one in mainland China, in Shenzhen, 10 years later.

China now accounts for 7 per cent of the company’s revenues. “We’re still only scratching the surface in terms of opportunities and are learning all the time,” says O’Callaghan.

His advice to Irish companies thinking of market-entry strategies for China is to hire staff in the local market. Not alone will a local person bring with them a valuable contact networks, they also bring a proper understanding of the local business culture.

Building a business relationship in China takes time but once relationships are established they tend remain strong. “It can take three meetings before you ask for business. But once you’re in, you’re in.”

ABP Food Group became the first Irish beef processor to secure orders for Irish beef in China, following the opening of the Chinese market earlier this year. ABP has been at the vanguard of Ireland’s exporting story for 60 years, working closely with Bord Bia and the Department of Agriculture, sourcing and developing new markets for Irish beef.

ABP is one of Ireland’s leading agri-business companies, supplying quality, award-winning beef for the retail, food-service and manufacturing sectors throughout Europe, USA, Africa, Asia and now China – more than 80 per cent of Irish beef is exported.

In anticipation of Ireland getting access to the Chinese market, ABP established a Chinese presence in 2011 and embarked upon a comprehensive research strategy which focused on food-service, manufacturing and retail. The objective was to find the segment best suited to ABP’s product mix and then use insights from the research to position ABP as the best choice for Chinese customers interested in buying safe, traceable Irish beef.

The expansive nature of the Chinese beef-buying sector along with the absence of detailed data meant the most effective way to carry out the research was to adopt a “boots-on-the-ground” approach. This meant visiting all major cities on the Chinese east coast, from Guangzhou to Harbin, to learn about the market and to gain a first-hand understanding of the Chinese consumer.

In May of this year, ABP also secured an exclusive three-year agreement, valued at €50 million, with Asian restaurant chain Wowprime Corporation, to supply beef to its restaurants across China.

Wowprime is a publicly listed company and has 151 restaurants in China. ABP beef will be available in two of Wowprime’s premium restaurant brands: Wang Steak and Tasty.

For Mark Goodman, managing director of ABP’s International Division, the deal “is a tangible endorsement of the quality beef that Ireland and ABP has to offer, and another significant step in developing new market opportunities for our products against the uncertain backdrop of Brexit”.

Tipperary-based Sepam is owned by the Kearney family and has been managing and delivering project solutions to the engineering and contracting industry globally for more than 40 years. From its corporate headquarters in Clonmel, it has operations in China, Europe, USA, Latin America, Africa and the Middle East.

It operates in a variety of sectors including high-tech and integrated global technologies, oil, gas and chemicals, infrastructure and heavy industries, with a customer base that includes some of the world’s leading Fortune 500 companies.

It has been in China since 1998, providing solutions to companies such as Kodak, Motorola, Shell, BASF, Sinopec, DOW, Bayer as well as with Disney, Chevron and Lego. Projects range from semi-conductor plants to gas plants, theme parks to R&D centres.

“In the past 20 years, we have maintained a significant professional presence in delivering world-class projects and we have employed a multinational team consisting of both Chinese and international professional consultants in excess of 2,000 people,” says Julie Lifen Qiu, who began her career with Sepam in China in 2003.

“For Sepam, China was very much pivotal in the expansion of the group and our Chinese team has integrated into management of the group business over the years and the company has developed very strong cultural and family ties to China. The Sepam Group has developed strong connections to our customers, supply chain and employees in China. This includes strategic partnerships with major leading-edge technology companies,” says Qiu.

China is the second largest global economy, with the fastest developing technologies, she says. “We are delighted to participate in the CIIE and we want to be part of this great success story.”