Message from Eoin O’Leary, Ireland’s ambassador to the People’s Republic of China 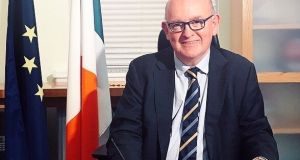 Eoin O’Leary, Ireland’s ambassador to the People’s Republic of China.

On behalf of Team Ireland in China, I warmly welcome the first China International Import Expo (CIIE) in Shanghai.

Ireland will have a strong presence at the event, with the Government represented by Minister for Business, Enterprise and Innovation Heather Humphreys and Minister of State for Food, Forestry, and Horticulture Andrew Doyle. Both will lead significant trade missions of Irish companies to a number of cities in China in the first week of November.

Ireland will also have a strong commercial presence at the Expo in Shanghai. Both Bord Bia and Enterprise Ireland will have stands at the Expo and more than 20 Irish companies will participate. Bord Bia’s Ireland pavilion will have 12 food companies participating. In a further strong indication of the commitment of our food and drink industry to the opportunities in the Chinese market, 14 seafood companies will participate in the Bord Bia Ireland pavilion at the China Seafood Expo in Qingdao later that week.

The CIIE is an encouraging signal of China’s firm intention of pursuing the further opening of its markets to the world, and deepening its support for trade liberalisation. These aims are entirely in line with the interests of Ireland, as one of the most open, globally focused and export-driven economies in the world.

The priorities of the CIIE include areas and topics such as innovation, high-tech manufacturing, food and agri-tech, medical equipment, healthcare, and other high-end services. These are all areas which match perfectly with Ireland’s strengths and offerings.

The CIIE provides a valuable opportunity for Irish companies to showcase their world-leading products and services, learn about the opportunities available in the Chinese marketplace and for our Government agencies to raise the visibility of the overall Irish image among the Chinese consumers. The CIIE also provides an opportunity for Chinese companies and people to have a better understanding of Ireland and its business environment. They can use this platform to do business with Irish companies and talk to the IDA on how to invest in Ireland.

China is an important market for our food and beverage exporters. Last year, Irish food and drink exports to China reached more than €900 million and it is now our second largest market for dairy and pigmeat exports. The introduction of Irish beef to the Chinese market this year represents a great opportunity to build on this success.

There was more than 40 per cent growth in Chinese visitor numbers to Ireland in 2017, reaching 90,000. Tourism numbers are expected to increase to 175,000 by the year 2025, and Tourism Ireland is continuing to raise awareness of Ireland and maximize the potential of the direct flights, with extensive marketing campaigns in late 2018 and throughout 2019.

The numbers of Chinese students studying in Irish universities and institutes of technology is now more than 3,500 and there are ever-increasing numbers of Irish students undertaking education exchange in China. There are leading Chinese companies from the technology, financial services and life science sectors invested in Ireland, and using our country to serve their global markets.

These developments all reinforce each other and of further benefit will be the introduction of Mandarin to the Leaving Certificate curriculum in 2020.

Next year will mark the 40th anniversary of diplomatic relations between Ireland and China, when a series of events will celebrate all aspects of the relationship between our two countries. Ireland’s participation at CIIE will ensure the economic links between China and Ireland become deeper and stronger with every passing year and provide even more reasons to celebrate.

I wish the CIIE every success and thank the Chinese Ambassador and his team in Ireland for working so hard to raise the Expo’s profile in Ireland over the past year. Our Team Ireland in China looks forward to November when we will work to ensure it is a major platform for further advancing economic, cultural and people-to-people exchanges between Ireland and China into the future.