Alexa, what helps me feel more organised and keeps me focused on fitness goals? 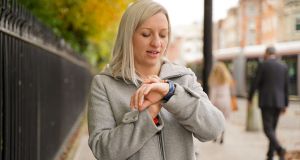 The main attraction of the Versa 2 for Lyndsey Duncan was that it’s a great fitness tracker with cool additional features. Photographs: Conor Mulhern

Each new generation of smart technology builds on the last, adding exciting new features and different ways to sync with the current crop of services. The Versa 2 is the first watch from Fitbit to offer Alexa integration, alongside a plethora of other new apps. Lynsey Duncan tested out some of the new features and integrations on the device.

What was the main way you used Alexa?

I have an Amazon Echo at home, so I was happy to see the Alexa integration on the watch. It’s definitely been handy to use while I’m out of the house.

If I am using Alexa at home it tends to be for playing music and films in the evenings. I found that I used it quite differently on the watch, more to keep organised. I don’t tend to keep everything scheduled in the synced calendar, even though I love new technology, I still prefer a pen and paper diary, but I did use it a lot for setting specific reminders throughout the day.

There’s a side button on the watch that launches Alexa, you need to have the app installed on your phone first and from there it’s a matter of pressing the button and speaking. So if I need to make a call for work at 3pm, I’d hit the button and ask Alexa to add that as a reminder. That way I could let myself get lost in other work and know that I’d get a buzz on my wrist beforehand to let me know when it was time to get ready for the call. Or if you thought of something you needed to pick up on the way home, you can just ask Alexa to add it to a list.

I really liked the silent alarm feature to wake up in the morning, but I don’t like having to set the alarm times, so using Alexa to do that was a nice touch. You can ask Alexa all the usual random things you’d ask with the Echo too, so checking whether it was going to rain would be an important one for me before I go out the door.

And also whatever random facts I might want to know, it’s handy for those moments when you’re trying to remember something with a friend and you reach the stage where you’re going to get on your phone to search for it. You can just ask Alexa and the answer will pop up on the screen on your wrist.

What other apps did you use most on the watch?

The Fitbit Pay feature did really save me one day when I went out for coffee with a friend and left my phone and cards in my bag at work. I’d connected to my banking app when I got the watch, but hadn’t actually tried it out yet. I wasn’t sure whether it would work without having my phone nearby, so it was a slightly nerve-wracking transaction. I probably could have tracked my heart rate rising standing at the till. But I was very happy when it did go through with no problems, so I have used that for contactless payments quite a bit since, especially if I’m out running and don’t want to bring a wallet with me.

I have it connected to my Spotify account as well. It basically works as a remote control for Spotify, rather than a standalone app, so your phone is playing the music and you have an on-wrist control with the Fitbit. I found that pretty handy to switch between songs if I am out exercising. There is a way you can load music directly onto the watch but since I generally have my phone out on a run I found it easier to do it that way.

There is an app store you can access through the Fitbit app on your phone, and there’s plenty of extra apps you can download to the watch that way. I have a Philips Hue lamp at home, and there was an app on the watch to control that, which was cool. Most of the time when I’m using the light I am at home and use the Echo to control it, but I think it could be handy if I’m away from home and wanted another way to switch it on as security in the evenings.

There are also some games and third-party apps that tend to be a bit more niche. There are ones that give you public transport information, though I didn’t find one for Dublin set up yet. There are also some things I would definitely use in certain situations, a few airlines have apps so you can use the watch to keep your boarding pass on it and things like that.

One third-party app I found useful on a more day-to-day basis was a Pomodoro timer. It's the system that lots of people use for focusing on work, where you set a timer for 25 minutes of focused work, followed by a 5 minute break, and then 25 minutes of work again. I have an app like that set up on my computer but it’s a useful model for any type of focused work, even with things like chores at home, so that was one I’ll definitely keep installed.

Any surprises with the watch?

This one had a really good battery, I got five days out of one charge. Mainly, I think I was happy with the simplicity of it. Alexa is definitely a highlight, and setting reminders while on the go has really helped me keep track of things.

But while I like tech at home I was always a little put off by the idea of a smart watch, even though this is one. I had used a Fitbit Charge before and I really liked the goals and structure it gave around exercising and sleep. The main attraction of the Versa 2 for me was that it’s mainly a great fitness tracker with some cool additional features. I don’t particularly want something that is going to bing at me for every email that arrives, because most of them are for work, or alert me to every message I receive, so I was relieved that this kept me focused on hitting fitness goals, but also had the added bonus of making me feel far more organised too.