In part two of our Everyday Adventures series in association with Jaguar Land Rover, garden designer Diarmuid Gavin and journalist Liz Dwyer take a road trip through the Wicklow hills 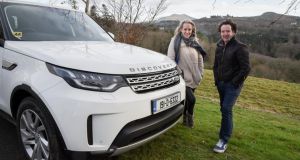 Celebrity gardener Diarmuid Gavin’s plantation-style home in Wicklow is just as eccentric and charismatic as its owner: crammed with artwork, statement furniture, salvaged antiques and a bathtub perched on the wraparound veranda out back – as you do when you’re a celebrity horticulturist. His own garden, however, although densely planted, is a lot less pruned and show-stopping than you’d expect. “Well, we are in the depths of winter, and I’m so busy with clients all over the world, I hardly get the time to focus on my own garden,” says Gavin, explaining his cobbler-with-no-shoes-scenario.

Today he has some rare downtime and is at home with his wife, Justine, having just done the schoolrun to Bray with his teenage daughter, Eppi. After a strong coffee in their cosy kitchen, Gavin, Roxy – his beloved black goldendoodle dog – and I depart for a road trip around his home turf in Co Wicklow. His car of choice? A Land Rover Discovery Commercial with a comfortable interior for driving on country roads and a boot big enough to carry the plants and tools to tackle any garden job.

As we drive through the Wicklow hills it’s clear he’s bewitched by the area, excitedly pointing out all the varieties of rare flora and unusual wildlife as we pass.

“What I love about Roundwood, Laragh, Glendalough and all these spots is you turn off the N11, head up the hill and in just a few minutes you get right into the heart of Ireland. There’s this incredible tapestry of lakes, mountains, bogland, forests, pastureland, farms, quaint villages and, of course, the highest pub in Ireland [Kavanagh’s – a hotly debated fact among publicans]. The colours and textures of the landscape change every few minutes and I just get lost in it all. The entire area is like a microcosm of Ireland and it’s literally one of the most inspiring to live,” says Gavin.

He clearly loves to drive, and says that he does a lot of his “best thinking” when out on the open road. “I’m fixated with work and, as Justine will tell you, I always take on too many things. My brain becomes this big muddle of ideas and the best way for me to clean it up is to get into the car and go on a long journey. When I’m driving everything solves itself; solutions bubble up to problems that have been bugging me, designs start emerging for gardens I’m working on, and I right all the world’s wrongs.”

From a more practical point of view, Gavin’s spacious car doubles up as his office – handy given that it has a generous boot space and a dedicated area for storing longhandled tools. He currently spends two or three days each week working in the UK and, when possible, he will take the ferry from Dublin over to Holyhead and drive rather than fly.

“I go nuts in traffic and commuting to and from the airport is hell. When I ferry and take the Disco [his pet name for the Discovery] over, I can go straight to the location – and I get to bring all my tools, plants, samples, drawings and whatever else I need in the boot. In fact, I pretty much live my entire life out of my boot.”

Then there are the dogs. “Roxy and Coco Chanel love to come with me on local jobs, so it’s a good job my boot is ginormous,” he says referring to the Land Rover Discovery Commercial’s impressive 1,856 litres of rear load space. “This car is so comfortable, I wouldn’t even mind sleeping in there and there have been a few nights on jobs that have gone till dawn when I’ve had to,” he adds.

For many years, Gavin has been dividing his time between Ireland and London, where he has an office that serves his international clients, who include celebrities and even royalty. They all want a sprinkling of Gavin’s creative genius in their backyards or palace gardens. These are big budget clients with big demands; one such client calls as we are driving, to place an order for €350,000 worth of mature trees to line their driveway.

TV work takes him across the Irish Sea on an almost weekly basis. He’s just wrapped on a new show called The Great British Garden Challenge, to be aired on Channel 5 this spring. “It’s not unlike The Great British Bake Off, but the contestants are professional or semi-professional gardeners, and we travel around the country to their projects and I am one of the judges.”

Over the past 15 years, he’s presented BBC programmes such as Gardeners’ World, Home Front and Gardens Through Time, and has made guest appearances on countless other shows, but is growing weary of television work, “I’d much rather be working in the garden or coming up with more creative challenges.”

And his next creative challenge is possibly the most ambitious – either crazy or a stroke of genius: a plant shop with a tattoo parlour. Last year he opened up Outer Spaces on South Great George’s Street, Dublin 2, in conjunction with Dunnes Stores. A plant shop and coffeehouse-cum-hipster hangout aimed at the Instagram generation, “it’s for the new breed of gardeners who don’t have big budgets or big gardens but who appreciate beautiful house plants and succulents.” The concept has been received so well that the collaboration is set to expand to include pots, tools and garden accessories and will be rolled out in select Dunnes Stores this spring.

This trend, Gavin believes, has been fuelled by Instagram above all – urging me to follow the accounts of plant stores Wildern in Amsterdam and Prick in east London. He himself loves checking in and posting on Insta, but refuses to follow anyone but family, “in case I want to unfollow them. I don’t want to offend them so it’s easier not to follow them in the first place,” he says, by way of explaining his social media strategy.

Spurred on by the success of Open Spaces, and the hours scrolling on Instagram, Gavin wants to take experimental retailing to another level. “I was thinking to myself , ‘what do youngsters love most?’ And it dawned on me: tattoos! Apparently, there are more young people in the UK inked than not, so why not have a tattoo parlour in a plant shop, that also sells coffee and food?” He’s currently eyeing up a unit in Kent, in England, for the store, as well as pulling all the elements together and trying to find a team of tattoo artists and botanists to staff the store. Does he have any tattoos himself? “No, but if this goes ahead, I’ll probably have to get a cactus inked on my bottom to put my money where my mouth is.”

We end our enlightening road trip at the foot of the Sugarloaf, where Gavin and Roxy set off for their daily walk. “If I don’t get out for a long walk I go nuts. I need them to keep my mind calm,” he explains. If this is calm Gavin, can you just imagine what hyper Gavin’s mind looks like?

With convenient side and tailgate access, the impressive loadspace and underfloor stowage can accommodate all the equipment you need for your work. And with a powerful 3.0 SDV6 engine plus a full 3,500kg towing capability, it does all the heavy lifting so you can get on with the job. As a commercial vehicle, the new Discovery Commercial benefits from a VAT refund for businesses.

Jaguar Land Rover is built around two iconic British car brands: Land Rover, the world’s leading manufacturer of premium all-wheel-drive vehicles; and Jaguar, one of the world’s premier luxury sports saloon and sports car marques.  The 2019 range of Jaguar and Land Rover vehicles is available to test drive from our state-of-the-art landmark showrooms across the country.