How Irish companies are keeping their energy costs down

BWG Foods, who own and operate Spar, Eurospar, Mace, Londis and XL has been able to negotiate highly competitive energy prices and achieve energy efficiency through its partnership with Electric Ireland 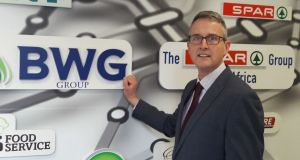 Aidan Keane, finance and IT director with BWG. Through its affinity partner programme BWG has been able to negotiate energy costs on behalf of its retailers.

Electric Ireland has been an exclusive energy partner to BWG Foods since 2014. “It was important for us to find an energy partner who took a longer term view of our relationship,” says Aidan Keane, finance director with BWG Foods. “We weren’t just looking for the lowest price. We wanted to form a long-term relationship with a partner who would proactively assist our retailers to reduce their energy costs and consumption.

“Energy costs are a major issue as they represent a significant portion of the store’s operating costs . We also wanted a partner who would be flexible and work closely with our retailers, while providing a dedicated customer service offering. We got that with Electric Ireland.”

The BWG Foods and Electric Ireland affinity partner programme has been one of group’s most successful with over 900 stores signed up to the electricity offer. This has allowed BWG Foods to provide its stores with competitive energy prices and to assist them in reducing their energy costs by understanding how their bills work and how they can reduce their consumption.

A further dimension to the relationship was added in February of this year when BWG Foods launched a Shared Savings Incentive Scheme provided by ESB (Electric Ireland’s parent group) to its retailers. This scheme assists retailers in financing the cost of replacing lighting in stores with new energy efficient LED fittings and bulbs, reducing energy consumption by up to 20 per cent.

The next energy saving opportunity in the pipeline is the funding of energy efficient refrigeration solutions. Early indications are that this will provide a further 20 per cent saving in energy consumption.

“One of the great advantages of being in a group of independent retailers is that the store owners can get together and share new ideas and solutions in areas like energy efficiency,” says Keane.

In Ireland for more than 50 years, BWG Foods owns and operates the Spar, Eurospar, Mace, Londis and XL retail symbol brands in 1,040 locations across the country. The stores are owned and operated by independent retailers and franchisees. As a wholesaler, BWG Foods utilises the combined buying power of the group to secure the best prices for its retailers. It is now using the same principle to help in the critically important area of stores managing their energy costs.