Fantastic scenery, filming locations from Game of Thrones and luxurious pampering only hours from Dublin 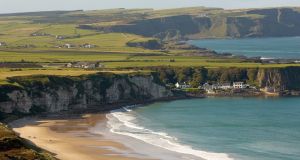 When you embark on the Causeway Coastal Route, don’t forget to pause for breath. The windswept beaches, dramatic cliff tops and simply stunning scenery are likely to leave you gasping in astonishment – and that’s before you’ve ever set foot on the Carrick-a-Rede rope bridge, teetering 30 metres above the crashing waves.

Situated in the most northerly part of Northern Ireland, and just a few hours from Dublin, this route spans from Belfast in the east to Derry in the west. It’s full to the brim with incredible views, great beaches and world-class golfing. And then there’s the air: invigorating, enveloping, and as fresh as you’ll encounter.

If you have decided to start the route in Belfast, make one of your first ports of call The Gobbins cliff path in County Antrim.

This striking basalt cliff path features tubular and suspension bridges, caves and tunnels. Take the 2.5-hour guided tour from the visitor’s centre and cafe and see what nature and wildlife you meet along the way. You’ll hear stories about local smugglers, and may even spot a dolphin or two swimming off the coast.

As you continue the journey west, you’re greeted by the beautiful Glens of Antrim. There are nine glens in total, with deep green valleys and charming towns and villages along the way: these include Carnlough with its pretty harbour, Cushendall, which hosts the Heart of the Glens Community Festival every August, and Cushendun, whose caves have featured in the TV series Game of Thrones.

Described as a “gateway to the glens”, Glenariff Forest Park has waterfalls, forest trails and walks along the riverside, as well as views of the Mull of Kintyre. There’s also a visitor centre and Laragh Lodge Restaurant (named after the Ess-Na-Laragh waterfall it’s situated beside), serving up hearty meals and afternoon tea.

Near Ballymoney, you’ll find another Game of Thrones location. The Dark Hedges (pictured below) – which appeared as the King’s Road in series two – is comprised of an avenue of 18th century beech trees that interlace to create a distinctive and much-photographed archway.

In Ballycastle, be sure to make a pit stop at the Ursa Minor bakehouse for dishes featuring ingredients from local organic farms and foraged from the countryside. If you fancy something sweeter, try the Paris-Brest (a choux pastry filled with hazelnut cream), or a frangipane tart with seasonal fruit.

From there, jump on the ferry for a trip to Rathlin Island. Located six miles from the coast, Rathlin is Northern Ireland’s only inhabited offshore island. From its harbour, you can cycle or take the Puffin Bus (which runs from Easter to late September/early October) to the Bull Point lighthouse to spot seabirds and seals. You might also be lucky enough to see one of Rathlin’s golden hares along the way.

Rathlin-born Margaret McQuilkin has run Coolnagrock Bed and Breakfast for the past 16 years and is a passionate advocate of the island, which she describes as “a place to get away from it all and get your head shired” .

“You can see Scotland, Donegal, the North Antrim Coast; we’re very much a stepping stone between Ireland and Scotland,” Margaret adds.

“You can go walking or cycling for the day and you might not see another person until you come back to the harbour again.”

If you decide to stay overnight, the Manor House restaurant and guest house reopens on March 1st and its menu will feature fresh fish landed in Rathlin along with vegetables and meat from local suppliers, plus Broighter Gold rapeseed oil from County Derry.

Continuing along the route, you’ll soon reach two of the best-known sites on the Causeway Coast: the unmissable Giant’s Causeway (above), with its tens of thousands of ancient basalt columns, and the white-knuckle Carrick-a-Rede rope bridge, linking the mainland to the tiny island of Carrick-a-Rede.

As well as these hugely popular locations, there are plenty of other great attractions nearby.

“From whenever you walk through the gate and see the whitewashed buildings and all the history and heritage, it’s a magical place,” she says. “We love to have visitors come to the site because we’re incredibly proud of what we do, and we love people seeing the world of whiskey and becoming immersed in our family.”

Leaving County Antrim and heading into County Derry, don’t miss Downhill, the dramatic setting for the Mussenden Temple. This round temple, built in the 18th century as a summer library, is perched high above Downhill Beach at the edge of a cliff and offers spectacular views of the wild, frothing waves below.

Make time for a stop-off at Binevenagh Mountain, formed 60 million years ago as a result of molten lava, or take a woodland walk in the Roe Valley Country Park near Limavady before you reach the finish line in the walled city of Derry, enriched and exhilarated by the Causeway Coastal Route.

Set within 163 acres of parkland, the award-winning Galgorm Resort and Spa offers luxury relaxation after a busy day of sightseeing. Its spa and Thermal Village have an impressive selection of riverside hot tubs, indoor and outdoor heated pools, saunas and steam rooms.

There are also more than 400 varieties of gin housed in its gin library, with a daily residents’ gin tasting, and five resort restaurants to choose from. Rooms start from £190 (approx €219) bed and breakfast per night based on two people sharing.

Elsewhere, the Bushmills Inn started life as a coaching inn in the 17th century, with the main part of the establishment built in the 1820s. It’s now a four-star boutique hotel with the strapline, “traditional luxury with a modern twist”. Rooms start at £120 (approx €138) bed and breakfast per night based on two people sharing.

The Bushmills Inn has its own 30-seater cinema in the original coaching house. It holds movie nights featuring recent blockbusters, a two-course dinner and popcorn.

Work up an appetite along the Causeway Coastal Route

Northern Ireland: discover one of the world's best food destinations this autumn