Did you think festival season was over? It’s only just beginning

Summer may be coming to an end, but festival season continues right through the autumn season in Ireland. Book a short break at one of the many fantastic Irish festivals on offer this autumn 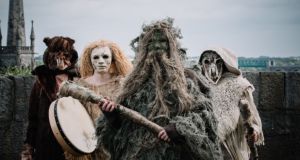 You may have packed away your muddy wellies and camping gear until next year, but festival season isn’t just consigned to the summer months. This autumn sees a bumper harvest of vibrant, award-winning festivals around the country, from world-class opera and ancient mythology to cutting edge films and celebrations of the global Irish community.

With forgotten musical masterpieces in a Viking town, otherworldly installations and performances exploring the origins of Halloween, and events welcoming our far-flung diaspora home, there’s so much to explore, so near your door, as the evenings draw in - not to mention stunning backdrops, great accommodation and delicious food and drink options.

So why not book a short break at one of these fantastic festivals?

Now in its 68th year, Wexford Festival Opera runs from October 22nd to November 3rd. The event, named best festival at the 2017 International Opera Awards, welcomes new talent from around the globe and breathes new life into forgotten works.

This year, artists from around the world will gather in Wexford to perform a range of exciting pieces. Events include a one-night-only performance of The Veiled Prophet by Irish composer Charles Villiers Stanford; a production of Don Quichotte by Jules Massenet; Dorilla in Tempe by Antonio Vivaldi – the first Baroque opera to be performed at the festival in more than 30 years - and the world premiere of a newly-commissioned opera by Irish composer Andrew Synnott, La cucina.

Special receptions and lunchtime recitals are also planned, and you can catch some more eclectic acts at the annual Wexford Fringe, an open-access arts festival in parallel with Wexford Festival Opera.
Local accommodation includes the Talbot Hotel overlooking the River Slaney, Clayton Whites Hotel, also in the town centre with its own Tranquillity Spa, and the Ferrycarrig Hotel with its views of the River Slaney Estuary.

Dining options include The Yard, with menus showcasing handpicked produce from its 10-acre garden, and La Côte Seafood Restaurant near the National Opera House.

Some time left to spare? Browse some local crafts from The Makers House in Wexford, or visit the 19th-century Johnstown Castle, with its ornamental grounds boasting more than 200 varieties of trees and shrubs.

According to Celtic folklore, the end of October and beginning of November marks the time when light turns to dark and the veil between our world and the other is at its thinnest. These origins of Halloween are set to be celebrated in the new, three-day Púca festival in in Athboy, Trim and Drogheda.

All sorts of supernatural goings-on, light installations, performers, projections and interactives are planned for the brand new festival, which runs from October 31st to November 2nd and is named after a shapeshifting creature, Púca.

The festival kicks off with the Coming of Samhain procession at Athboy, Co Meath. Among the many other events are a light spectacular at Trim Castle and surrounds, and shadow puppetry and candlelit tales in Drogheda, Co Louth. There will also be a host of live music concerts, plus tasty treats and craft products on sale.

You could turn your visit into a short break with a stay at the Trim Castle Hotel, overlooking the Anglo-Norman castle at Trim (as seen in Mel Gibson’s Braveheart), or combine your Púca visit with a round or two at Trim’s Knightsbrook Hotel, Spa and Golf Resort, with its 18-hole championship golf course designed by the late Christy O’Connor Jnr.

In Drogheda, rest your head at the boutique-style Westcourt Hotel, where you can enjoy tapas from its West29 ‘restolounge’ and a cocktail in Woodrows Bar, or stay at the d hotel, on the banks of the River Boyne, and relax with a craft beer from The Hops bar.

Donegal and Limerick are hosting this year’s Global Irish Festival Series, an opportunity for Irish people around the world to return to home soil, forge new connections and discover shared histories. Both counties have created their own programme of events, with Donegal Connect taking place from September 27th to October 6th.

This year’s festival, which has been designed as an itinerary around Donegal, will include tours, food experiences, genealogy classes, theatre, business workshops and conferences and even a golf tournament. Live music acts include Altan and Christy Moore, while Buncrana-born playwright and author Frank McGuinness will be among the recipients of the Tip O’Neill Irish Diaspora Award.

Other highlights include a Donegal Feast at the foot of Errigal mountain (with roast goat on the menu), and the Donegal Bay and Blue Stacks Festival carnival parade, which will see around 400 performers take to the streets of Ballyshannon for a theme of ‘Coming Home’.

During your visit, don’t miss Fanad Head Lighthouse – one of the Wild Atlantic Way’s most beautiful gems – or let off some steam kayaking or hiking with Eco Atlantic Adventures on Lough Swilly.

Dillon’s Hotel on Letterkenny’s Main Street offers a stay in the heart of the action, while Clanree Hotel, just a few minutes’ drive out of town, has pool and spa facilities to unwind after a long day exploring. And for fine dining – not to mention fine wines - try Browns on the Green, Letterkenny.

The I.NY initiative celebrates the relationship between Ireland and New York all year round, with artist collaborations and cross-Atlantic projects. This work culminates in the I.NY Festival, which runs from October 16th to 20th.

This year’s festival will reflect the ties between both countries through music, culture, literature, fashion and more. The line-up includes a 2020 US Election-themed event with Dr Jane O’Meara Sanders, advisor to - and wife of - US Senator Bernie Sanders, and a talk with Malachy McCourt, author, Limerickman and brother of Angela’s Ashes writer Frank McCourt.

The weeklong Richard Harris International Film Festival, in honour of the celebrated Limerickman and Harry Potter star, takes place from October 22nd to 28th and will feature world premieres, Q and As, and a circus-themed, black tie awards ceremony.

The festival’s opening gala on October 25th is the world premiere of a documentary about Harris. Directed by Brian Reddin, it features contributions from actors including Fionnula Flanagan and Stephen Rea.

This year, the festival will also include iMET, a two-day conference (from October 22nd to 23rd) exploring technology disruption and media and entertainment innovation. Guest can explore a virtual reality/augmented reality lounge with interactive educational games and VR films, plus networking, talks, product launches and pitching opportunities.

Head for heights? Check into the 16th floor penthouse in the Clayton Hotel, with panoramic views and cream marble floors. Or stay in a period bedroom and sink into a roll-top bathtub at No.1 Pery Square, a boutique hotel in the city’s Georgian Quarter.

Enjoy some wine or a warming hot port and an artisan cheeseboard at the Copper Room, and an ‘east meets west’ menu in the surrounds of the Marco Polo restaurant, also on O’Connell Street.

Explore the city on a kayaking or paddleboard tour along the Shannon, where you’ll spot the 13th century King John’s Castle. Or book a castle tour and visit the café, with its views of the courtyard and the Shannon.