‘I love taking risks’: the passion driving young Irish speakers in the arts

The Irish language is an undercurrent which runs through Irish art but, for those who speak it daily, the personality of the language simply bubbles up in their work 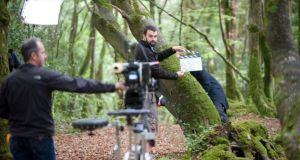 Antoin Beag Ó Colla: “The way artists paint, dance, express, frame and create is extraordinarily intertwined with their culture, their community and the language they have grown up with.’

Screenwriting, digital media and dance might not be career paths you would automatically link to Gaeilge, but the language has moved on and so have the opportunities it can give to young people within the world of the arts.

Antoin Beag Ó Colla (33) is an award-winning screenwriter who has worked for TV3’s Red Rock, RTÉ’s Callan’s Kicks and is soon to begin as a storyliner on RTÉ’s Fair City. From Machaire Rabhartaigh in the Donegal Gaeltacht, he has won awards for his short films Rúbaí and An Mhallacht. He is keen to use Gaeilge as much as he can in his work, mainly because he says it comes naturally for him.

“When I was growing up, the image that people had of Irish was old lads sitting in their jumpers, smoking a pipe and having a pint. People would ask me (about growing up in a Gaeltacht)  ‘Oh did you dance around a broom in your kitchen?’ and I would say ‘No, we listened to Bloc Party’. To dispel the stereotypes of where I grew up is really important to me,” said Ó Colla.

“One of the first sketches I did for Callan’s Kicks was a send-up of an Irish language show with Daithí Ó Sé presenting a show called Cad is ainm bitch? where he was trying to make the Irish language modern and contemporary for the audience. Gaeilge feeds into my work all of the time,” says Ó Colla.

Language is so much more than mere words. The way artists paint, dance, express, frame and create is extraordinarily intertwined with their culture, their community, their landscape and the richness of words and language they have grown up with. This is the glorious treasure chest from which they can draw upon as they create, he says.

For Ó Colla, while he loves to write in Irish, it is not a question of art being strictly one language or another or of writing in either language; it is what language suits it best.

“Whether I choose to write in Irish or in English is down to if it suits the story. If there’s no reason why it can’t be in Irish then I will do it in Irish. I’m more comfortable in it, I think it’s funnier and I want to make it modern; to dispel any notions people have about it. It is all art, and I am lucky to have both languages,” he says.

Liam Scanlon (31) is an award-winning sean nós performer, choreographer, collaborator and primary school teacher who has performed nationally and internationally alongside artists like Altan and De Dannan. Originally from Glenhest, outside Newport in Co Mayo, he is associate artist with Dance Ireland for 2016 - 2017.

Although not from a Gaeltacht area, he counts his mother who is from Árainn Mhór island in the Donegal Gaeltacht, as well as the tutelage of a teacher who was passionate about the language, as giving him a great grasp of Gaeilge. He first came across sean nós dancing at the age of 16 and quickly realised the inextricable link Gaeilge had in forging a deeper connection to this type of dance and how he expressed himself within it. One language being informed by another, he explains.

“For me, Gaeilge is like my dancing, it’s a connection. It’s part of who I am and where I am from. With the dancing the steps were danced by someone before, or someone has influenced you with your steps. Irish is like that for me as I have it on my mother’s side of the family and you are connecting back into their past,” says Scanlon.

Ironically, describing this type of dancing is something Scanlon is trying to articulate. “With something like Irish dancing, it's about technique and performance, whereas with sean nós it must come naturally and cannot be forced,” he says.

“If you are at a pub or at a session a dancer won't just hop up straight away. It has to be the right time, the right atmosphere, the music has to have reached a certain place and the dancer has to be feeling a certain way. You can't just dance on demand. You could, but it wouldn’t be real sean nós, it doesn’t work the same way,” said Scanlon.

“You cannot just learn it in one class. It’s movement, it’s a culture, you are embodying your community and those that have gone before you and everything they have passed on and you are channelling it. For me there is an emotional connection with the dance; a true expression,” says Scanlon.

Siún Ní Dhuinn (31) is comhordaitheoir digiteach Gaeilge / digital coordinator for Irish in RTÉ which is a new role within the organisation. She has worked as a lecturer in UCD and for organisations including Conradh na Gaeilge, Maynooth University and Forás na Gaeilge. She is also a writer, editor of her bilingual blog As an Nua and produces and co-presents a podcast on RTÉ called Beo ar Éigean.

One of the main rules for the podcast is that she and her fellow presenters (Áine Ní Bhreisleáin and Sinéad Ní Uallacháin) don’t talk about the language. “We want to talk about anything through Irish but not necessarily about Irish, because often the narrative ends up being about Irish and why it is not taught properly instead of enjoying what’s wonderful about the language, which is just communication.

“When you get past people talking about the language, it has so much personality and our whole country’s identity is tied up in this beautiful language and if we can find a way to open up the language to people, they can really embrace it,” says Ní Dhuinn.

Originally from Dundalk, Ní Dhuinn went to the Gaelscoil there and said her parents' influence helped her to see Gaeilge just like any other language.

“Neither of my parents spoke Irish at home. Mum is a French teacher and we went to France every summer to learn French instead of to the Gaeltacht so I never went to the Gaeltacht as a child. I think it gave us a view of Irish as just another language just the same as French or German, so we never really got caught up in what it meant or what it represented. I think our parents gave us a very equal playing field when it came to learning about languages.”

Ní Dhuinn said the language can offer a supportive network when it comes to career opportunities.

“I often think that if you are an Irish speaker, the community is so small that we tend to help each other out. If you want to get something off the ground, for example I have a blog called As an Nua, it’s a nice access point to do something like that in, and you feel very much supported within that community.”

Her hopes for her role in RTÉ include helping create an Irish-language online personality for the channel.

“I want to do that by providing fresh, innovative and engaging content online which might make people rethink what they originally thought about Irish in RTÉ. I love taking risks and I love change. Even though it’s terrifying, it’s hugely important, especially for a language that is maybe feeling a little bit vulnerable, to not shy away from risk or change. I think it’s where TG4 really flourishes as well; they are not afraid to take a risk and it really pays off for them,” says Ní Dhuinn.

For more about Creative Ireland and to find out what’s happening in your local area, check out your county Culture and Creativity Plan, see creative.ireland.ie/en/local-plans