Creative coding: tech skills can fuel a world of imagination 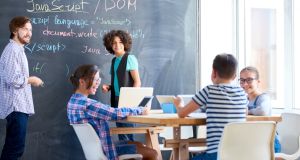 Group coding classes: “You are turning young people into creators as opposed to just consumers”

“The tools of technology are like the paintbrushes of the 21st century for young people,” says Jen Hesnan, TechSpace programme manager with Camara Education Ireland. “The sky is the limit,” she explains, “when it comes to technology and the creative careers and opportunities that can come from it.

Established in 2012, TechSpace is a national network of digital media spaces in youth organisations and schools to help young people create digital and technological content. It is a not-for-profit open consortium of organisations and is operating in youth projects around the country.

One of their aims is to inspire young people to use their interest in technology to become future creators when it comes to digital, not just consumers.

This is something that is also at the heart of the Creative Ireland programme, a project that has a vision that everyone in Ireland should have the opportunity to realise their full creative potential. A cornerstone of the five-year initiative is that by 2022, every child in Ireland will have access to tuition and participation in art, music, drama and coding.  In the same way that writing a story or composing a song is a creative act, coding is a means of expressing an idea or concept in a creative form, they believe.

The TechSpace programme is one of a number that help put that idea into action. “When you give young people the creative platform and the springboard and skills that they need such as coding, design or video editing then you are empowering them to take it that step further. It culminates for us at the annual Creative Tech Fest where we have over 300 young people and youth workers from all around the country come and celebrate their own work,” says Hesnan.

There can be a perception that coding is a mathematical problem for a mathematical mind but Hesnan says that coding is just like learning a language that then allows you to create something that interests you and uses creative parts of your brain; everything from computer games to board games.

The benefits of meeting other young people in a fun, social environment cannot be underestimated

She says that they are getting rid of the sense of fear young people might have when it comes to computers and technology by ensuring the focus is on what they are interested in making and achieving.

“I think it is best not to focus on a potential barrier such as learning the coding. I would focus on an end creative project that you would like to achieve. So, if you would like to create your own computer game or board game or a painting that makes music when you touch it, to look at those as things that are very achievable. Anything is possible once you are interested in achieving it,” says Hesnan.

The benefits of meeting other young people in a fun, social environment cannot be underestimated, says Hesnan.

“A young person might come in and have a real interest in computer games but as a result won’t socialise with anybody outside of his room so his parents are worried, he has no friends, he’s stuck in the house. So what then happens is you have your local TechSpace project on a Tuesday evening and that young person gets to come in and meet other young people who are interested in gaming and they get to learn and create because they have a trained youth worker there that can train them up in basic coding and give them the springboard activities to be able to create their own game as a group. So you are turning young people into creators as opposed to just consumers,” she explains.

When Giustina Mizzoni, executive director at the CoderDojo Foundation, joined as the first employee of the foundation almost five years ago there were 80 Dojos worldwide, now there are 1,500.

“The people who set up CoderDojo understood how isolating it is to be a child with an interest in technology and they wanted to create fun, social spaces for young people to come together and learn about technology,” says Mizzoni.

CoderDojo attracts a huge range of young people, she says, and the dated perception that it is solely for males or maths experts is off-putting.

“Coding is for any child and it is a tool to express yourself. It is not what many people think of when you think of stereotypical programmers. I think there is still definitely a perception that programming is all about nerdy boys in their bedrooms.”

Catrina Carrigan (20) went to her first CoderDojo when she was 15. She had “absolutely no knowledge of coding” and found she loved it so much she decided to pursue a career in computing and is studying Enterprise Computing in Dublin City University.

“I know that I wouldn’t have considered computing as a course option without going to CoderDojo, I don’t think I would have known to look into that area. I knew literally nothing about computers. I had a vague interest in science in general, I could have seen myself possibly studying biology or something like that, but I definitely wouldn’t have considered any sort of computer course or engineering.”

Carrigan said one of the things she enjoys most about it is that you create things that interest you.

“It’s free, it absolutely is not school. You are going there to learn something that you want to learn about. You can go there and if you have an idea you can ask the mentors to try and help you make it. So it gives you a chance to learn in a completely different way so you can make really cool things outside of the school environment,” says Carrigan.

There are lots of other benefits from learning to code for young people, from career prospects to learning problem-solving skills and meeting other young people in your community, says Mizzoni.

“If you really enjoy it and you have an aptitude for it, you can go on and have a hugely successful career in the technology industry. But there are a whole host of other benefits that people get from the process. It’s all about problem solving, it teaches you how to think logically, it teaches you how to understand your users, to have empathy for people, obviously creativity itself is a benefit.”

“In CoderDojo in particular, children learn presentation skills because at the end of Dojo, typically, a few kids will stand up and show what they’ve been doing. They learn communication skills, teamwork, perseverance, resilience - a whole lot of skills that are really important for anyone regardless of what they do with their lives,” says Mizzoni.

The Creative Ireland Programme is a five-year initiative, from 2017 to 2022, which places creativity at the centre of public policy. It is a culture-based programme designed to promote individual, community and national wellbeing. See creative.ireland.ie for more.