The word ‘menopause’ frightens the life out of most people 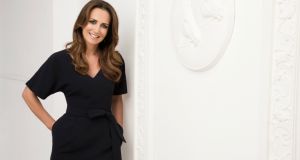 Lorraine Keane on Cleanmarine MenoMin: “I took two capsules a day for two months. It started making a difference in two weeks.”

“The word menopause frightens the life out of most people, male and female. It’s like this dirty little secret that people are afraid to discuss, possibly because of the ageing connotations,” Keane says.

Broadcaster, Lorraine Keane, is talking about a subject that makes a lot of people, both men and women, extremely uncomfortable. While she is not menopausal yet, she is perimenopausal and is a spokesperson for Cleanmarine® MenoMin, a natural food supplement that helps women through perimenopause. However, she was a little reluctant to begin with, for fear of being seen as “an aul one.”

“It’s kind of like standing up and admitting you’ve hit a certain age,” she says. “So, when I was approached by Cleanmarine® MenoMin to be a spokesperson I nearly fell off the chair when they said menopause, because immediately I thought, ‘I’m not 51’, because that’s the average age of menopause.”

“You hit 35 and your fertility starts going in decline,” Keane says. “That’s a time that’s very difficult in a woman’s life and we don’t consider it at that stage. We think, and I certainly thought: ‘oh, sure I don’t need to be thinking about that menopause thing’.”

The subject of menopause and the period building up to it, perimenopause, is a hugely important, but often misunderstood subject, and can create a lot of unnecessary worry for women and their partners. So, what is perimenopause? It is a relatively new term in the medical community to describe the symptoms caused by normal hormonal changes that happen to women as they get closer to menopause.

Women are all born with a unique number of eggs that will determine their fertile years and timeline for perimenopause. Some women start to experience changes from their early 40s and, on average, perimenopause lasts from five to 10 years. During perimenopause, a woman undergoes hormonal changes that can produce physical and emotional symptoms. The decline of oestrogen and progesterone levels means it can affect hair, skin, weight, energy, libido, memory, sleep and mood.

But with the right diet and nutritional supplements it is possible to manage symptoms. Every woman is different when it comes to perimenopause and the type of symptoms can depend on sleep, stress, exercise and diet. Some of these symptoms might be hot flushes, night sweats, vaginal dryness, low libido, memory loss, confusion, feeling emotional, headaches, fatigue, poor sleep, poor skin tone and thinning hair.

Keane said that a lot of women can ignore their symptoms and just make excuses.

“I’ve always suffered with my hormones and anybody around me has suffered with my hormones and that’s with various times of the month and different times of the year,” she says. “The symptoms (for perimenopause) were disrupted sleep, tiredness and fatigue and irritability. What working mom or busy woman, because we all multi-task and do too much, doesn’t have those symptoms? And then decreased sex drive [was another symptom], so I said: ‘because of the other three you wouldn’t really be in the humour a lot of the time anyway. You’re so bloody tired from not sleeping’.”

Keane tried out Cleanmarine® MenoMin for herself and was surprised with the results. “At this stage in my life I’m genuinely not going to try and talk about something or represent anything that I genuinely don’t believe in and don’t feel passionate about,” she says. “I took two capsules a day for two months. It started making a difference for me in two weeks.”

She feels strongly that women, and men, should be discussing menopause more openly to create a more honest conversation and take away the stigma. Partners can be just as bewildered as women who are going through this hormonal transition.

“They [partners] are bearing the brunt of it when you’re having your bad moments, or your low moments, or you’re irritable or unreasonable as we all have been when we’re feeling that way,” Keane says. “And no matter how much you’re thinking to yourself, ‘this is unreasonable, stop it now’. It’s just one of those things, in a lot of ways, you feel out of control so, for them, it must be petrifying and they must feel so helpless. The bottom line is, they love you.”

Keane says she would be open to complementary therapies like acupuncture and reflexology when she’s going through the menopause. “I’d look at everything. I have every reason in the world to be happy and positive and grateful and if I’m not feeling like that most of the time or the majority of the time then I will be looking at why, and finding something that will help.”

The menopause is a perfectly natural transition that women’s bodies are supposed to go through, but it is not a natural or necessary aspect to suffer with health concerns, or to feel very low or even depressed. Symptoms, at any age, are the body’s way of telling you that it needs support. Keane says not to suffer in silence.

“If we don’t talk, then we’re not sharing and therefore we’re not learning. Women are the biggest culprits in that situation because we’re the ones that aren’t having that conversation, almost pretending that: ‘oh that doesn’t affect me, let’s not talk about that,’’ she says. “Don’t suffer in silence, let’s talk menopause and let’s have the conversation. Let’s share and help each other out. Why should we just accept this and plod along? We’re no use to anybody, including ourselves, unless we look after ourselves and each other.’

Keane says that menopause should actually be seen as a positive thing. “Going through it, obviously, there are difficulties and that’s not nice but women go through difficulties their entire lives with their hormones,’’ she says. “Actually getting past the menopause is a whole other freedom and independence for women that they hadn’t had since their teens. So for me it’s something that we should be looking forward to, and embracing, getting through it the best we can.”

“At least if we talk about it we’re going to be armed with the information we need to make it an easier ride and then it won’t have that silly little stigma,” Keane says. “We should be saying: ‘big deal. Let’s get over it and let’s get on with it’.”

Lorraine Keane is a spokesperson for Cleanmarine® MenoMin for Women Omega 3 Krill Oil, blended with B vitamins, folate, biotin and soy isoflavones. It is available in health food stores and pharmacies nationwide. This synergistic combination is ideal for perimenopausal and menopausal women, helping to regulate hormonal activity, maintain normal mucous membranes, as well as reduce tiredness and fatigue.