David Ulrich, Rensis Likert Professor at the University of Michigan believes HR can hold up a mirror to what is happening in an organisation 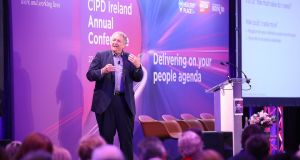 “HR does not have to be your friend to be effective,” explained David Ulrich, Rensis Likert Professor at the Ross School of Business, University of Michigan, speaking at the CIPD conference held in Croke Park this week. Hundreds of HR and business delegates listened intently to Ulrich’s speech and took part in a masterclass given by the renowned author and speaker.

We spoke to him about getting the right talent, retaining employees and boosting productivity within the workforce, as well as the challenges faced by the HR department.

Organisations need to take away overly time-consuming things employees do. For example, we found that employees spend 25-35 per cent of their work doing reports, approvals and meetings, so HR should enable workplaces to get rid of the things that are non-productive. Secondly, help employees find a job that matches their passions. If they are doing something that they love, management doesn’t need to worry about their productivity. Unleash that passion and take away the barriers that keep them from being successful.

If a job is routine, standard and predictable, there’s a high chance a robot will take it over because it’s going to be more efficient. They don’t get sick, they don’t have down days, they learn. Where technology should play its part in HR is in accessing information and getting better insights and information about the workforce and work requirements. Where I hope technology eventually goes is not just innovation and information but connection. Technology should connect people and today it doesn’t. I go into colleges in America and I see 70-80 per cent of the kids wearing earbuds. That’s not good.

HR does not have to be your friend to be effective

It’s not about the physical characteristics or the personality of the person, it’s how they can perform. I still think we have to have standards, so here is the performance expectation in terms of outcomes and the approach to doing the job. We don’t care what the background is. When they now do try-outs in orchestras they do it behind a screen, so what we are judging is the outcome, the quality of music.

HR can hold a mirror up to what is happening. I don’t know very many line managers who wake up in the morning and say ‘I’m going to abuse my employees. I’m going to be rude and obnoxious’. They judge themselves by their intent, not by their behaviour, so part of HR’s job is to hold a mirror up to that person. For example, to say, ‘you intended in that meeting to help us move forward but you personally offended that employee instead’.

Impact of a toxic work environment on healthcare costs

Some physical healthcare costs and some emotional healthcare costs are highly correlated with a toxic work environment, which is itself correlated with the organisation not being competitive. Stanford Professor, Jeffrey Pfeffer speaks of the value chain between the way we build a work environment around managing conflict, information, decisions and treating people and healthcare costs. Some diseases like cancer and diabetes have an emotional aspect as well. Stress is a big word - it’s the imbalance between resources and demand; am I feeling overwhelmed?

Transparency is a positive thing. Taken to an extreme it can be a dangerous thing too but the #metoo movement says if somebody is creating a hostile work environment or an abusive setting, people now have a mechanism to make that a public and transparent issue. I think that holds people accountable.

HR should conduct their work “quietly and fairly”

That’s the dilemma of radical transparency; that the public media becomes the court and that’s not fair either. I’m currently advising a university accused of malfeasance [wrongdoing by an official] and the university says it can’t comment at the moment because it’s in the middle of the investigation. If through its investigation it finds that someone has done something wrong, they will act on it. But on the other hand, you can’t assume all allegations are legitimate and that’s very difficult.

The problem with gender imbalance is in the supply chain. In an engineering school, if it is 90 per cent male and 10 per cent female, then more men than women are going to be hired. Therefore we need to get more women into STEM, so the solution is not at the end of the game, it’s at the beginning. The more that HR gets involved in those early pipeline issues the more we’ll see outcomes.