On your bike: ‘We’re already thinking of our next adventure together as a family’

To celebrate families in the outdoors this summer, and ahead of the Freddo Family Camps, we sent a family of four to cycle the Waterford Greenway 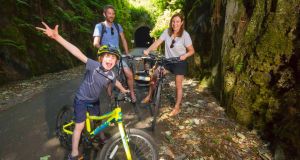 Finding the time and motivation to plan family activities can be a challenge, especially with little ones, but making the effort will reap huge rewards, as Mimi Murray found out when she cycled the Waterford Greenway with her husband Brian and sons Zac (5) and Jacob (18 months).

Why did you choose cycling the Waterford Greenway for a family day out?

Zac loves to cycle as does my husband Brian – he cycles to and from work every day, but whilst I can cycle, I’ve always been quite nervous getting on a bike around Dublin, where we live. It seemed like the perfect adventure with young kids as the Waterford Greenway is a straight run, off road, so it felt safe and it meant we could bring Jacob along in one of the little toddler carriages.

First and foremost, I hoped we would all have lots of fun and just relax and unwind. I also hoped that we would reconnect as a family and bond a little bit, as the stresses of daily family life mean that things can get a bit transactional, rushing here, rushing there and never stopping to chat and find out about each-other’s day. Lastly, I wanted to show my son the benefits of exercise and with something like cycling it doesn’t even feel like exercise, it’s just fun.

I learned to relax a little bit and to try not to control every situation. I am always worried about nap times and feeding times for Jacob but sometimes you need to loosen up on those things in order to get the most out of life. Kids are resilient and they will fall back into their routines if you take them out of it for a few days or weeks.

What did you learn about the kids, through the experience and what did they learn about you?

Firstly, I learned that Zac is a speed demon and I couldn’t believe how fearless he was on the bike. He also cycled for about 20km, which for a five-year-old was no easy feat, so he’s a tough little guy too. The people at Greenway Bike hire in Dungarvan, where we started our cycle, couldn’t believe he did that many kilometres and neither could I. I was so proud of him. My legs ached by the time we reached home so I was pretty impressed with him. Jacob also chilled in the carriage the entire time, watching the world go by and even took a little nap, so the day proved to be a huge success. Zac actually didn’t know I could cycle so he was very impressed to see me on the bike and even more so when I challenged him to a race. He won!

Making it to the Ballyvoyle viaduct, which was blown up in the Irish civil war, was great. It was a scorching hot day but inside the tunnel was cool and very still. Zac was quite frightened when we entered it but he cycled through it and back again, so I was proud of him for that. Also the views of the coast just outside of Dungarvan were absolutely spectacular, so that was good for the soul and will be etched on our memories for a long time to come.

Absolutely, we are already thinking of our next adventure and what we can do together as a family. Sometimes you underestimate children’s ability but this taught us that they are well able for lots of outdoor activities. It’s also great to get the kids out of the city. My heart melted when Zac said, ‘it’s so peaceful here’.

I think it’s vital that you make time to spend together as a family. While my two are quite young, they are already susceptible to tablets, televisions and smart phones and I don’t want that for my kids, even though it’s inevitable, I know. I hope that if we nurture a love of the outdoors and an adventurous lifestyle now, that they’ll choose that over Netflix and social media in the future. It’s also a great way to discover new things about your kids and they about us, that mum and dad are much more than just ‘eat your greens’ and ‘go to bed early’. They can have fun, and be cool too.

Freddo is always ready for his next big adventure, and this summer Cadbury Ireland is following his example and throwing open the gates of Camp Freddo.

Camp Freddo is the perfect place for families to get out and get active, while spending quality time together in the beautiful surroundings of Blessington, Co Wicklow.

From July 31st to Aug 4th, families get the opportunity to take part in a full day of adventure including zip-lining, canoeing, raft building, biking, archery, arts and crafts and more. There is even a BBQ-style lunch for all families to enjoy.

Family tickets are priced at €20 with 100 per cent of all proceeds being donated to Barnardos.