Camp Freddo: ‘We got to lose ourselves in the simple pleasure of doing stuff together’ 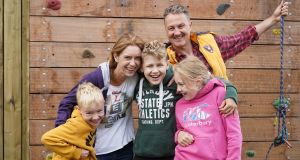 Sarah-Lyn McKenna: “We walked, we climbed, we zip-wired, we lazed about, we orienteered and we got lost. In truth I got lost!”

Expectations can sometimes be low when it comes to spending an entire day with kids, especially if it involves activities that may not suit each child’s ability or mood. But when the McKenna’s (Malachy and Sarah-Lyn) decided to take their youngsters Mal Jnr (13), Ava (11) and Ewan (8) to Camp Freddo in Blessington for the day, they were pleasantly surprised that each of their children so thoroughly enjoyed the day.

To be honest our expectations as parents didn’t go beyond a wish to get our three children away from gadgets, out of the house and into the fresh air for a few hours. The mention of a zip wire was a nice hook, not only for the children but for us as we’d never been on one before.

We already knew the area was nice – the lake at Avon Ri behind Blessington always looks stunning with the Sally Gap and the Wicklow mountains rising behind it. Someone had mentioned orienteering so we were looking forward to seeing how our children would manage to follow the instructions on a basic map without resorting to Google or Siri.

What did you get out of the day?

We walked, we climbed, we zipwired, we lazed about, we orienteered and we got lost. In truth I got lost! We got a healthy glow on our faces thanks to the sun and the sturdy breeze coming off the lake, and some people got sore fingers from being too stubborn to give up on the climbing wall until reaching the top but more than anything, we had a really good laugh together. And we got to lose ourselves, if only for a day, in the simple pleasure of doing ‘outdoor stuff’ together.

What did you learn from your kids, through the activities they participated in?

It’s an odd feeling as a parent when, for the first time, you watch your child do something outside his or her comfort zone – something that’s mildly challenging, requiring physical fitness, or strength or even courage. So when your eight- year-old child is faced with ropes and a harness at the foot of a 20-foot climbing wall, every instinct in you wants to step in, to help him, to push him up or to help him down.

It’s only when you resist these urges that you can appreciate the look of concentration on his face, his determination to climb as high as his older sister and brother and his joy at climbing higher than his mother. We learned that our children are more capable than we thought, and maybe we should just get out of their way more often and let them get on with it.

What did they learn about you?

Our children learned that their parents are big children. That is their biggest learning of the day. We make rules they don’t like, dinners they won’t eat, we curtail their use of smart phones and gadgets, we censor their TV viewing and warn them of behaviours that will likely lead them astray on the pretext that we know what we are talking about because we are “grown up”. From their perspective, we could be perceived as nothing more than jailers who provide food and occasional pocket money. But any child who sees his or her parents screaming uncontrollably on a zip wire, or falling on their backsides while absailing down a climbing wall, or missing an archery target from five feet – that child learns that his parents are no different than any child.

Sadly, no. We always intend to. Our children are very involved in all kinds of activities: soccer, tennis, swimming, dancing, piano but our schedules are so busy that, outside of family holidays, extra curricular activities mean that we are usually travelling in various directions, several evenings a week, to drop off and collect our children.

Would you do it more often, having tried this?

Most certainly. You have to make time to have time, so we will try to make the time.

Why is it important for families to get together in this way?

Some years ago, in the days when I was single and utterly carefree, my mother was babysitting for my sister who had two young children. It was a Sunday night and she stayed over while my sister went out with her husband. My mother later described to me the chaotic nature of the house when they all woke on Monday morning; the hustle and bustle of my sister and her husband getting two children out of bed, the breakfast sounds, the bickering, the hurried panic of trying to beat the traffic, to get to the playschool, to get to work. My mother lay in her guest bed and listened. And after a time, the front door slammed shut and all was suddenly silent. Those children are grown up now. And that house is again silent. So, it’s important to take the time to make lots of good noise together.

The best part was hearing the children shouting through the forest, during the orienteering, “Dad, you’re going the wrong way.” Or maybe it was the satisfied look of achievement on our youngest’s face, because he got through the rope climbing course, which was difficult, without giving up. Or just the fact that we spent a day smiling and laughing. We had a day of laughter. Finally, everybody went to bed tired and fell asleep instantly. Bonus!