Bosch’s cooking workshops: functional, fun, and a great intro to their range 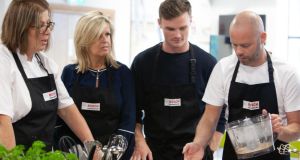 Cookery Workshops: attendees at the Bosch workshops in their showroom in Ballymount, Co Dublin, are shown how to get the best out of their kitchen equipment

Cooking and baking shows are among some of the most popular on the planet, and it’s easy to see why; everyone loves to learn a couple of new dishes to add to their repertoire.

At the Bosch showroom in Ballymount, Co Dublin, free cookery demonstrations and workshops are offered, in a bright, purpose-built space that will entice even the most nervous of chefs to break out the blender.

Groups of up to 16 individuals can take part in regular, hands-on workshops, with a wide variety of one-off themed classes on offer; including Vegan meals, Italian cooking, Tray Bakes, One-pot Wonders and Gluten Free baking, to name but a few – the list is endless.

But more importantly, attendees are shown how to use and get the best out of their kitchen equipment. They see first-hand how some of the add-ons can make the cook’s life significantly easier. Many appliances have a number of functions that owners are often slow to engage with, mostly out of fear of the unknown. These classes should dispel some of those fears, while also teaching attendees some easily prepared and executed meals.

Both Bosch cooking experts were friendly, engaging and informative and immediately questions about cooking and use of the appliances started to flow

With minimal kitchen skills between us, we set out to learn five new dishes at a recent workshop, run by Bosch cooking experts John Carty and Sinead Feighery, just two of the numerous cooking tutors who teach regularly at the showroom.

With aprons at the ready, the eight participants eyed the menu with eagerness; chicken in paprika, cauliflower and kale gratin, Italian potato salad, flatbread with goats cheese and tomato and mini plum cakes. Given the task of preparing, cooking, and then eating all five dishes, we were eager to crack on with the two-hour training session.

Both Bosch cooking tutors were friendly, engaging and informative and immediately questions about cooking and use of the appliances started to flow.

Participants had either bought a Bosch oven recently – which come in the Serie 4, Serie 6 and Serie 8 range – and wanted to get the most out of the appliance, were considering a new purchase and wanted to make an informed decision before buying, or wanted to take part in a class, learn how to cook and have some fun.

Using Bosch appliances throughout, we became accustomed to a stand mixer, food processors, hand blenders, liquidisers , choppers and, of course, the oven itself.

As we started to cook, different oven settings for different functions were demonstrated. For the cauliflower and kale gratin, the Hot Air Grilling setting was used and within 20 minutes had created a lovely bubbly golden-brown dish. For the chicken with paprika, the Bosch oven was set to Hot Air Grilling, with low added steam – which reduces cooking time – and preheated to 190c. Chicken breasts on the bone were cooked through, tender and tasty in a mere 25 minutes.

Flatbreads were made in a Bosch electric mixer, with the dough hook attached. With the motor running on its slowest speed all components of the breads were added and kneaded and left to rise. When ready they were placed in the ovens, turned to the Pizza Setting at a scorching 230c, and toppings were added. They were baked until golden-brown for around 12 minutes.

Finally, using another Bosch mixer, our mini plum cakes were beaten together and spooned in to individual cases before being added to the Bosch ovens – set to 4D Hot Air 180c with high added steam.

While everything was cooking, Eleanor Martin, Bosch consultant, told me about the importance of the workshops and the overall function of the showroom.

“When people come here, we help them decide the brand that they want to buy. We explain to them about the technologies; steam in the oven, Wifi, remote connectivity and so on. People will then go back with a shopping list and hand it to their kitchen designer or electrical retailer and order what they want, after they have made an informed decision here. Upstairs we have a training and demo area and we cater for up to 20 people in a class.

“They learn to turn on and off the ovens, see first-hand what works and it helps them decide what they want to buy, as well as helping them get the best out of the appliance once they have bought it. A lot of the time, they will buy one of these beautiful ovens, they will turn it on to 180 fan and that’s all that ever happens. We’re trying to get them to use the pizza setting, or the dehydrator. Our ethos is to try to demystify everything for people, as this is not something you would buy every day. It’s important to get the right information that’s relevant to you.”

As they don’t do the same recipe twice, they do get repeat attendees; people who are just interested in cooking. Last year, they held some collaborations, Rory O’Connell, co-founder of Ballymaloe Cookery School for one, and more of these are planned for 2019.

“We opened in 2014 and it’s going extremely well with around 8,000 people through the door every year. People tend to buy a whole kitchen and our reputation is such that kitchen and electrical retailers will send people to us. It’s all about the customer experience,” she says.

As we finish up chatting, the food is ready and we all take our seats to marvel over our handy work and dig into a sumptuous lunch with new friends made. Not a bad way to spend a Thursday morning.

To find out more, visit www.homeofinnovation.ie

Bosch’s cooking workshops: functional, fun, and a great intro to their range

Bosch fridge freezers have some of the coolest technology around. Here’s why

Not all fridge freezers are created equal, so choose a style that’s right for you

Need a new fridge freezer? We have six questions to ask before you buy