Travel entrepreneur Mary McKenna, who started her business in her sittingroom, on the importance of being financially and physically fit and how family trumps all 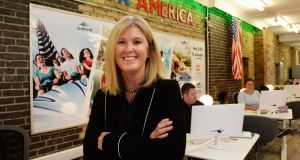 Mary McKenna recently advertised a sales vacancy in her travel business, Tour America. The notice required candidates to have two years’ experience. “Every single woman who applied had it. Not one of the men did,” says McKenna.

It was clear evidence of the old adage that men see they have some of the required skills for a job and go for it. Women see they are missing some and don’t. “It was quite shocking.”

Adversity in her own life has left McKenna with a strong instinct to seize the day in all aspects of life.

Her father died unexpectedly when she was 24. “He was only 55 and had a huge effect on my life. He would always say you can become whoever you want to, just believe in yourself, find what you love and you will be good at it. He also told me I had tremendous common sense and it was going to get me everywhere in life. I believed him.”

He was right. She started in the travel trade with the short-lived airline Club Air. As duty manager she, of course, never had to fly a plane but she secured a commercial pilot’s licence anyway, the better to carry out her functions. These included doing passenger weights and balances manually, reading the weather to pilots and directing the planes in. If the cleaners didn’t turn up, she cleaned the planes.

Never work-shy, her advice to young people is to choose an area you love and get stuck in. “Find the person who is the best at what you want to do and offer to work for them free for a year. Consider it an investment in yourself, because immersing yourself in good people and copying what they do, is the best education you’ll get.”

She got her start when the travel agency she worked for was bought out by a UK company. “I had built up relationships with all these suppliers that were being dropped. I saw an opportunity so I rang them up and said I was going to set up on my own,” says McKenna. She set up Tour America in her sitting room in 1995. Its first commercial office was in such a rough location that she stayed overnight at weekends, to fend off burglars with a stick.

Today the business has (much swisher) offices in Dublin and Cork, employs 50 people and includes the Cruise Holidays and Magic Holidays brands. She attributes her success to working hard, both on the business and on herself.

“I worked on my weaknesses. I was constantly learning and educating myself. I read a business book a week.”

She does one major personal development course a year, including programmes with life coach Tony Robbins and studies in neuro linguistic programming (NLP).

She met her wife, Stephanie, with whom she parents a 10-year-old son, 15 years ago on a ski trip, and credits her as the primary female influence in her life. “We have the same core values about being kind and giving back in life. She has worked for Goal in Afghanistan, an experience that changed her life.”

McKenna had a life-changing event of her own in 2004, being hit by a car just outside her office. For a time it was touch and go as to whether she would survive.

“The doctors gave me a 50/50 chance of survival. It really did change my life.”

Prior to the accident she had been working 16-hour days, seven days a week. After it, work-life balance became more important. “I am very good at this now. I work hard but never miss the important family events. I take every weekend off and am very involved in my son’s sports – I’m his rugby and soccer coach.”

Fitness was always something she enjoyed but after the accident it became a necessity. “I have to work out nearly every day in order to ensure a disc in my back doesn’t come out,” says McKenna.

“I played top division hockey before my accident and I truly loved the sport, so for me now in my 50s it is very important to stay fit. I also believe that when you are fit, your mind is also fit.”

She keeps fit financially too. “I have always lived within my means, saved first and spent what was left over. I am a very grounded person who enjoys a simple life. I walk in and out to work every morning and cycle whenever I can.” Despite ongoing problems with her back she has helped raise money for good causes through sponsored marathons and long-distance cycles.

McKenna is a believer in mentoring as a way forward for young business people.

“I am involved in mentoring female entrepreneurs with a group called Going for Growth, supported by Enterprise Ireland and run by a wonderful lady called Paula Fitzsimons,” says McKenna, who advises any young entrepreneur to seek out a mentor from an early stage.

“In my own case I could have moved things along a lot quicker if I’d had someone to talk to and bounce ideas off. It really helps to have someone who has been through it all before to talk to.”

But the achievement of which she is most proud is being selected as a finalist for the EY Entrepreneur of the Year programme. “It’s the reason I have most wanted to ring my father for since he died, because I know he’d have been so proud.”

Her mother would too. “My mum has vascular dementia and it has had a major impact on me and my siblings. She isn’t able to communicate now at all. It has made us all realise how illness can change your life.”

So live life well, she exhorts. “Life is very short, so it is important to find a job that you love, and not to work somewhere you are unhappy in. And don’t sweat the small stuff as it is all small stuff anyway.”

Be careful of the company you keep too. “I put up with some toxic behaviour in the past from some people. Now I don’t tolerate toxic people at all. I only surround myself with positive and good people. Family comes first and that’s that. There is nothing more important.”