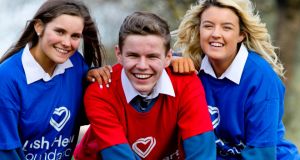 CPR is something we should all be able to do because it can save a life.

CPR are three little letters that can mean so much - the difference between life and death in fact. They stand for Cardio Pulmonary Resuscitation and represent a life skill in its truest sense. CPR is something we should all be able to do because it can save a life in the event of sudden cardiac arrest. If those around you know how to do it, it could save yours.

Thanks to the work of the Irish Heart Foundation, and sponsorship from Bank of Ireland, knowledge of CPR is growing.

[The 2018 Bank of Ireland Sponsor for a Day programme will see the Bank of Ireland name being removed from the Leinster and Munster Rugby team shirts for a day and replaced with the Irish Heart Foundation’s logo.]

That’s good because when a person collapses as a result of cardiac arrest – the stopping of the heart - their chance of survival falls by 10 per cent each minute they are without CPR or defibrillation. After five minutes, without CPR, they have a 50 per cent chance of survival. Starting CPR keeps their heart viable and keeps oxygen going to the brain until the emergency services arrive.

Put another way, if no one steps in to provide CPR, by the time an ambulance arrives, there is often no one to save.

So what is CPR? It’s unbelievably simple. You put one hand on top of the other and press down on a person’s chest to a depth of two inches. You do it around 100 to 120 times a minute, (or use the popular recommendation of matching the rhythm of the Bee Gee’s song Stayin’ Alive). And you keep doing it until help comes.

“It’s a community issue so everyone needs to be confident about what to do when it does happen because it makes the difference between life and death,” she says.

In 70 per cent of cases this happens at home so firstly, know your eircode. This will get the emergency services to your home as quickly as possible.

“If a person collapses, check for a response. Gently tap them on the shoulders and say ‘hello, can you hear me’,” says McPhillips. “Check if there is any sign of movement or life, and to see if there is no proper breath.”

Call 999 or 112 for the emergency services, tell them you need an ambulance and put the phone on speaker. The operator will put you through to a specialist who is trained to help and encourage you as you provide CPR.

“Early CPR is what saves lives so place the heel of your hand in the centre of their chest, along the mid nipple line, put your other hand on top and push hard, two inches in, 100 to 120 beats per minute,” she says. If there is an automatic, external defibrillator (AED) nearby, use it.  There are more than 180 community first responder groups around the country whose volunteers will be alerted by emergency services to get to you.

Very many high streets, schools and sporting clubs have defibrillators too, so if possible, use one of those. Don’t worry about training, they are designed to talk you through the procedure once you activate them.

If there isn’t an AED readily available, don’t despair. Keep going with your CPR. It might take half an hour or more for an ambulance to get to you, but don’t stop. If there are bystanders, take turns because it is physically tiring.

“Every minute counts,” says McPhillips.  “There are five links in the chain of survival in the event of cardiac arrest, and the first three can all be done by anyone until the ambulance arrives. They are recognition of cardiac arrest and activation of the emergency services, CPR and rapid defibrillation. We know statistically that Irish people love to help out and you are ten times more likely to do CPR if you have been trained.”

PUSH HARD IN THE CENTRE OF THE CHEST

In Ireland there are 5,000 cardiac arrests each year. Last year Barry Long had one of these. In March 2017 he was in the pool at the University of Limerick with his children when, without any warning, he went into cardiac arrest. He was 46 and had a longstanding interest in fitness, including many years as a triathlete.

“I grew up with eight male friends and they all said what happened to me was a wake-up call for them, because, of the eight of us, I was the last one you’d have identified as a candidate,” says Barry.

He got no warning pains or other signs to alert him to the danger he was in, he just collapsed. “I survived only because there were people around who knew CPR, including four trained lifeguards and a nurse and a former fire-fighter and trained paramedic who just happened to be at the pool that day. The University of Limerick also has two AEDs. If it had happened in the car on the way home I’d be dead.”

Instead, when he spoke to the Irish Times, he was on his way down the country for a holiday with his family.

“Every day 13 families lose a loved one to cardiac arrest,” says Celine McPhilips. “The only happy stories in this are those of bystanders brave enough to step in and be the first links in the chain of survival. In 2016 185 people who suffered cardiac arrest got to go home to their families because someone carried out CPR.”

Never be afraid to intervene if you suspect someone has suffered cardiac arrest says McPhillips: “You can’t do anything wrong. The worst thing you can do is nothing.”

To find out more about CPR, or about training courses in your area, visit irishheart.ie/cpr