In part four of a six-part series, which aims to help buyers identify property potential and pitfalls, we ask experts to assess the costs and implications of renovating a kitchen 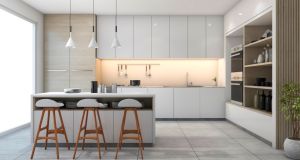 Tackling the kitchen area and back of the house is where much of a renovation budget can get absorbed when renovating second-hand homes. Photograph: iStock

It’s considered by many to be the most important room in the house but, sometimes, it takes a bit of vision to see the potential in a kitchen. In part four of our series, which aims to give buyers the confidence to look beyond the obvious when viewing a home, we ask the renovation experts how best to assess a kitchen space.

Tackling the kitchen area and back of the house is where much of a renovation budget can get absorbed when renovating second-hand homes, and where all the trades often meet.

Eoin Kenny from Lynch EK Property Maintenance says the first job to address in most kitchens is assessing the boiler and heating system for safety and efficiency.

“In the average four-bed home, wall-mounted boilers in the kitchen or in a utility space just off the kitchen are the norm,” says Kenny. “A quick look should reveal stickers or a log on the outside of the boiler indicating when it was installed and when it has been serviced, which will give you an idea of how well it’s been maintained. If it’s over 15-years old it won’t be a condenser boiler and, in turn, the heating system won’t be particularly efficient. A plumber will be able to advise if a simple flushing out of the heating system and a boiler service will suffice, or if you’d be better off investing in a replacement boiler,” says Kenny, who estimates you should plan for around €1,800 to cover the cost of a new boiler. Under the new SEAI grant scheme, householders who own a house that was built before 2006 can get a grant of €700 towards the cost of upgrading central heating controls, a job which can encompass a boiler replacement. Visit seai.ie to check eligibility.

When renovating or upgrading a kitchen, many homeowners opt to merge the rooms at the back of the house into one large kitchen, dining and lounge space as open-plan living is very conducive to modern family life. However, architect and interior consultant, Denise O’Connor of Optimise Design, warns that open-plan living has pitfalls too.

“What we encounter a lot, is homes that once had an L-shaped ground floor plate (sitting room to front of house, dining room and kitchen to rear), that were converted into an open plan space at the back often leave a rather pokey front room. It’s usually stuffed with furniture, and the only one other living space at the back is filled with family paraphernalia, kitchen units, couches and the dining table. The entire ground floor can seem very cluttered. Also, while open-plan living may suit young families, when the kids grow into teenagers, we find a lot of clients want to put walls back up to give everyone their own rooms,” says O’Connor.

A simple solution is to work within the current kitchen floor-plan, says O’Connor. “I suggest creating a galley-shaped kitchen to one side of the room, and make a dining area on the other side with built-in banquette seating against the wall and chairs or benches on the other side. This saves space and creates zones for the eating and cooking areas neatly. I’d also recommend installing big French or slider doors out to the garden beside the dining space. Suddenly this small room is functioning much better and feels brighter and more open plan. Another alternative is to put in glazed sliding doors between the back room and kitchen as this gives you flexibility. You can then use the back room for a playroom/office/teenager’s den and you still have an additional reception room to the front,” says O’Connor.

If knocking through walls at the back of the house is preferred, Ted Laverty, MD of Onlinetradesmen.ie says the cost of doing so will depend on whether it’s a partition or load-bearing wall (a builder or carpenter will be able to tell you straight away which one it is). If it’s the latter, it’s a much more labour intensive and expensive job as new wooden or steel beams will need to be installed. Plumbing and electrical systems may also need to be rerouted and also you should factor in plastering, painting and patching up the floor.

Lafferty suggests around €6,000 should cover the labour and materials for a job like this in the average four-bed semi-detached house.

When it comes to the cabinets and kitchen finishes, Louise Rankin of North Interior Architecture Design Consultancy, says today’s kitchens have more efficient work formations than the typical L-shaped kitchens of old. Contemporary kitchen plans tend to have islands or a U-shape galley, so the oven, sink, dishwasher, fridge and bin are all accessible with just a pivot on one foot. Even if you need to re-jig the current floorplan, Rankin suggests seeing if existing units can be salvaged before discarding them.

“Often the doors and fittings of older kitchens are rarely worth the cost and effort of a repaint but the carcasses can nearly always be upcycled. There are a number of companies selling amazing doors and gable ends that quickly and easily give a designer finish, for a fraction of the price of similar-looking units in kitchen showrooms. Likewise, you can pick up really smart handles, sinks, taps and hardware from wholesalers for a steal, which really gives a sleek finished effect,” says Rankin.

O’Connor finds that modern laminate worktops are also a great way to save money on a kitchen refurb and can look deceptively like expensive marble and stone finishes but says “the trick is to get your sink under-mounted, as it gives a much more flush and polished finish.”

If starting the kitchen from scratch, both Rankin and O’Connor favour hiring an experienced joiner over buying off the shelf from a kitchen retailer. “It works out better as you can create a layout that fits your room like a glove and you can customise everything, from the island height down to the fork drawer. Storage is one of the most critical elements in any kitchen renovation and is often overlooked as clients get carried away with the look of the room. Consider every drawer and press: where are you going to put your cutlery, teacups, dry goods, spices, pots and pans, your eggcup collection? These items should be easily accessible for the task at hand,” says Rankin, who says recent joinery jobs for an average-size kitchen, including building an island unit, have been coming in at around €4,500.

O’Connor also points out that when there’s a carpenter on site, commissioning them to do work on other rooms while on site will bring the overall cost of renovating down significantly.

For flooring, Rankin suggests saving on this element and splurging on lighting instead. “Using laminate planks can look amazing. They’re really durable and used in lots of commercial situations and start at around €25 per square meter, so are great value. We often use this type of flooring from the kitchen presses to the outer line of the island and then use wood or tiles for the rest of the living or dining room as it helps to zone off each area.

“Often people underestimate the electrical cost of installing a new kitchen and get quite a shock at the quotes,” says Justin McCarthy, MD of Independent Light. “If the wiring is old, you may need to replace it all - light switches, sockets, power sources, thermostats and old spotlights often need to be replaced. Appliances like induction hobs can require new cabling from the mains, which can add another day of labour costs,” says McCarthy.

Investing in good lighting can transform a kitchen. Layered and varied lighting is key, says McCarthy. “Typically, we install bright task lighting over the cooking and food prep areas. But for night time or when entertaining, mood lighting in the form of LED strips, under wall units and under the lip of the island creates a relaxed atmosphere and gives great depth to space. Pendant lighting hanging down over the island creates a subtle boundary line and a nice canopy light over the dining table creates a great atmosphere.  For basic fittings, labour and LED strips, €2,000 should see the job through but you can spend thousands on a single light, so it’s best to see what’s left in the budget before blowing it all on pendants,” says McCarthy.

For information about Bank of Ireland mortgages, visit bankofireland.com/homes.