To champion bars driving Irish whiskey success, we went in search of Redbreast along the Atlantic Whiskey Way – a new route to the heart of Ireland 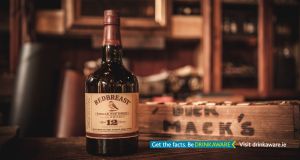 Redbreast 12: a whiskey with a direct connection to Ireland’s past

Redbreast is considered by many to be the essence of Irish whiskey. The best-selling pot still whiskey in the world, it is defined by its robust, peppery flavour while still being incredibly smooth.

Triple distilled and aged in a combination of ex-bourbon barrels and Oloroso sherry casks, its creamy flavour blends perfectly with the explosion of fruit flavours of raisins and sultanas at its heart.

Redbreast has a direct connection to Ireland’s past: the process of creating it is the same today as it was in the 1800s when Irish whiskey was the biggest-selling spirit on the planet. This is an elegant whiskey that deserves its cult following and the 12-year-old, along with its four siblings, make up a family of considerable distinction that has won almost every whiskey accolade in the world.

There are five Redbreast whiskeys: Redbreast 12; Redbreast 15; Redbreast 12 Cask Strength; Redbreast Lustau and Redbreast 21. Recently, there was also a once-off release of Redbreast Dream Cask, a 32-year-old special edition release that people queued up to buy.

Travel through Ireland and you will find Redbreast not only behind the bar of almost every pub but deep in the conversations of whiskey fans. It’s a whiskey that conveys the romance of Ireland, wrapping its heritage and success in the low light and dramatic locations of traditional Irish bars, particularly along the western seaboard.

Setting out to capture this connection, Redbreast created the idea of the Atlantic Whiskey Way, a route mapped out by a series of bars along the Wild Atlantic Way. Each possess the true sense of what a whiskey bar should be and a visit to any of them should allow the visitor to experience a glass of Redbreast in the very setting it is best designed for – an Irish pub.

There are more than 80 bars along the Atlantic Whiskey Way, each with its own personality and identity. Some are on cliff tops, some face down the mighty Atlantic itself while others determine the streetscape of Ireland’s towns and villages.

[View the full list of bars along the Atlantic Whiskey Way]

We set out to explore the Atlantic Whiskey Way and meet some of the people behind the bars along it. It was an incredible journey, taking us through breathtaking landscapes and into wonderful local communities.

Here, we introduce you to just two of the bars we visited, Paddy Coynes and the Swagman, along this dramatic new route to the heart of Ireland.

The story of Paddy Coynes is the story of Ireland: families, funerals, celebration, commerce and community – all wrapped tightly around the ancient Ogham stone at the Tullycross village crossroads.

The walls of this 207-year-old family-run business are bursting with the personality and enthusiasm of the Coyne family. They and their army of friends and acquaintances make sure that every visitor knows that they have arrived at a place apart.

It’s in a beautiful location, just a few kilometres from Connemara national park and far enough off the main tourist route to be the kind of place you can feel you’ve discovered all by yourself.

Gerry Coyne (pictured above) runs the pub today, along with his nephew Colin, (whose father in turn runs the undertaker business that has always worked hand- in-hand with the pub). They take immense pride in their work and in the whiskey collection behind the bar, using it to unleash tales that bounce around the room as they knit you into their environment.

It’s a profound experience for a stranger, to be suddenly thrust deep into a conversation among people who have known each other for generations, to be welcomed and made to feel of value, simply for taking a seat at the bar. As I sip a Redbreast I watch the next stranger arrive and the same thing happens to them. And they’re as startled by it and grateful for it as I am.

The way the small front bar has been crafted is perfect for a whiskey drinker. The open fire, the dark wood, the objects of art and industry that have been placed around its walls. Even the light coming through the window makes the slow pace of a glass of whiskey all the more enjoyable here.

This is not a random place but somewhere that asks you to stop and consider your place in the world. Every aspect of this business has been curated slowly, to reveal the meaning of the landscape around us, and our place within it.

Venture into the back yard and find the small blacked out theatre space that thrives here, adding a layer of culture that is entirely unexpected. Take the measure of their restaurant and try the whiskey sauce with incredible seafood that is hand delivered from the ocean to the door.

Come to the mussel festival in May and watch as they pour whiskey over mussels and pine needles and set them alight in the street.

Find the time to discover what makes a bar a destination in itself.

It’s seven years since the Swagman opened his doors on Sligo’s main street, and a short stroll from the Garavogue River. It’s been a mighty journey since. Sligo is a music town, full of pubs, so to set your stall among them you need to bring something very special indeed.

By naming the pub after the infamous Swagman in the song Waltzing Matilda, the man behind this venture put his own identity firmly on the line, creating a bar as well known for its blues, trad and singer-songwriter nights as its whiskey and great food.

Australian Dale Barber and his wife Sinead took this traditional Irish bar and wrote entirely their own story within it. In doing so, they created something that local people choose to wholeheartedly call their own. Step through its doors and you’ll find all of Sligo at the bar. All ages, all backgrounds, mixing and talking within a building that has become a chronicle of the owners’ journey.

Surf boards and boomerangs blend seamlessly with GAA jerseys and Sligo Rovers memorabilia, while the shelves are filled  with a growing whiskey collection that still surprises Barber today.

There are 81 whiskeys in his collection so far, and each has a story to tell. Appreciating a bottle of whiskey, he says, isn’t so much about being a connoisseur as simply letting the whiskey become the start of a great story.

He knows the provenance of each bottle and enjoys matching the tale it conjures with the customer before him, watching their eyes light up with the story of how it ended up here in Sligo.

Taking pride of place is the full family of Redbreast, high on a single shelf, and as we try a glass of Redbreast Lustau, he talks with fondness of the way in which the Swagman has found its place here too. Navigating an Irish town as an incomer can be a complicated business but the journey makes sense when you hear that Barber grew up in a pub, run by his father, in Victoria, Australia.

He’s taken that lived experience from the other side of the world and brought it to everything he does. Sligo and its people matter to him and it’s clear that succeeding here is a goal that has real meaning. Go out of your way to take a seat at the bar soon, order a whiskey and let the Swagman’s stories unfold.

View the full list of bars along the Atlantic Whiskey Way.

Redbreast is produced by Irish Distillers at the New Midleton Distillery. For more, see redbreastwhiskey.com