A new whiskey story: from father to son

Chris Kane is the first cooper to graduate in Ireland for over 30 years, joining his father in the Old Bushmills Distillery

The father and son team of coopers, Alastair and Chris Kane at the Cooperage in the Old Bushmills Distillery in Northern Ireland 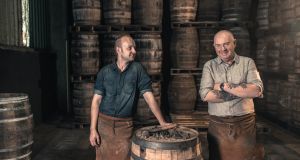 A cooper’s life: Chris Kane and his father Alastair at the Old Bushmills Distillery

Some 6,000 coopers once worked this artisan trade in Ireland, building and maintaining wooden barrels and casks for the thriving whiskey and beer industries that have become Ireland’s calling card around the world.

Technology rapidly overtook the trade in recent decades and metal pushed wood to the margins as the craft of coopering became almost extinct. Today there are only six coopers left in Ireland, North and South, and you’ll find two of them in the beating heart of the Cooperage in the Old Bushmills Distillery in Northern Ireland. Chris Kane is the newest recruit and joins his father Alastair in a family business that has charted four generations. Chris’s great-grandfather Jimmy Kane started his own journey here in 1935.

Alastair comes to life as he reflects on the journey his family tree has taken in the distillery. It’s a wonderful story of home, authenticity and a well-worked life: grandparents, parents, uncles, aunts and cousins of the Kane family have all been employed here across generations and there can be no underestimating the role the distillery has played in their lives – and that of the town of Bushmills overall.

To have his son carry on that line is a great thing he says and mirrors the new lease of life the whiskey industry is undergoing. “There were once 12 coopers working here but over the years, one by one they all left until eventually I was the last one,” he explains. “I honestly didn’t think there would be another cooper apprenticed.”

His son Chris finished the four-year apprenticeship with the National Cooperage Federation a year ahead of schedule, his early graduation celebrating the skill handed down to him by his father that gave him a head-start in this gruelling training course.

“I started working with my father and grandfather as a boy,” he says. “They taught me skills that most people don’t get to experience until they are much older.” He credits this family experience as helping him through the course.

He reaches for the tools he used during his apprenticeship – modern versions of older tools that his great-grandfather used and which they still use today.

Both men become animated as they tell the story of these tools which are close to one hundred years old and previously used by generations of their family. They show the dents on the metal and the grooves in their handles that have been moulded by many decades of hard work. Their trade has real meaning for them.

We’re surrounded by barrels that have arrived here from all over the world – American oak barrels that were previously used to mature bourbon, barrels from Spain that once held Spanish Oloroso sherry or port.

The aroma of the whiskey ageing in these barrels is an incredible experience and the idea of Chris and Alastair and generations of their family working to protect the Bushmills spirit that creates it is a powerful image.

The Bushmills coopers take these and rebuild or repair them, readying them for filling with recently distilled spirit which will, over time, become the famous Bushmills Irish whiskey in all its forms.

The distillery warehouses are living breathing places. Maturing for anything from three years and a day to over forty years the barrels expand and contract with age and according to the temperature of the warehouse. It’s in reaction to this maturation process that the coopers play their most vital role.

As the wood ages and the spirit within matures, cracks or changes can appear in the wood. The coopers are on call to travel deep into the Bushmills warehouses to repair, maintain and protect the casks as they age.

The aroma of the whiskey ageing in these barrels is an incredible experience and the idea of Chris and Alastair and generations of their family working to protect the Bushmills spirit that creates it is a powerful image.

The father and son team reflect on the purity of spirit within the barrels and the water it comes from. Outside, the Bushmills river flows through the town and it is from a tributary of this, called Saint Columbs Rill, that Bushmills is sourced, they explain.

It’s an authentic part of the Bushmills story that has real meaning for them and, like the river itself, they are once again assured that their family name will continue to flow through the Old Bushmills Distillery.