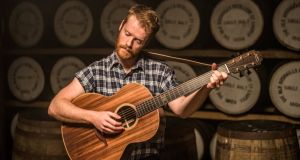 Ciaran Lavery: ‘The Bushmills toast was a reminder that things that have been around for centuries can still succeed today’

Until recently, Ciaran Lavery’s songwriting process was quite a structured affair, which required him to be “in a certain room in the house, and in a certain headspace”.

While writing his award-winning second album, Let Bad In, however, inspiration hit in the middle of the night and the Co Antrim singer couldn’t wait until morning to note the lyrics down. “I just got up out of bed, sat at the kitchen table and wrote some lines, because for some reason I woke with almost like an epiphany, thinking, ‘These are too important to forget’,” he recalls.

From Lavery’s 2013 debut Not Nearly Dark and the simple beauty of its standout track Shame, to Let Bad In with its thread of lost childhood innocence, the 30-year-old’s music manages to be both deeply personal to him, and resonant for his fans.

“One of the biggest gifts of music is when you can listen to a song that’s 100 years old and you can feel that song is written about you,” he notes.

“I wanted to make sure other people could feel a connection to my songs and memories.”

With two albums to his name and more on the way, and having racked up millions of plays on Spotify, Lavery has also learned to trust his instincts when he feels a song is ready for public consumption. “I’ve almost got used to listening to my gut, to say either I need to take a step back and look at this another time, or just leave it – it’s probably done,” he says.

“I wouldn’t want to become one of those people that obsesses and constantly edits their work, and then suddenly you find you’ve stripped everything away.”

Still, the reaction of others still takes the singer-songwriter by surprise. Whether it’s people weeping during one of his more emotional numbers (“It’s the strangest thing because you want to kind of stop and say, ‘Are you ok?’”) to the fans in Germany who sing along to every word when he performs there.

“The first time it happened on stage I thought there was an echo in the room,” he confesses. “It’s nice to have that, especially in places where it’s not home. Suddenly you get this realisation that music does reach more people than I anticipated or would ever really fathom.”

That sense of security was suddenly stripped away, but then you replace that with the independence of looking after yourself and becoming your own boss

Lavery credits his parents with instilling a strong work ethic in him. As a child growing up in the small village of Aghagallon, he would accompany his father on his rounds as a milkman. Later in his youth, he grafted everywhere from building sites to a peanut factory. “All the high-profile jobs that you would expect,” he jokes.

Going from a 9-to-5 job to becoming a full-time musician was daunting at first. “That sense of security was suddenly stripped away, but then you replace that with the independence of looking after yourself and becoming your own boss,” says Lavery, who is just back from a UK tour supporting London musician Luke Sital-Singh.

“There’s a strange sense of always having to move all the time that I’ve developed over the last year and a half or so, where I’ve got so used to moving. For me, being busy equates to surviving really, so having that feeling of being stagnant or standing in one place has now become the fear.”

He appreciates how lucky he is to be doing what he loves and which he describes as “basically my dream job”.

“I have pride in my work and I wouldn’t change it for the world. You just have to enjoy it and create as much as you can.”

Recently, Lavery voiced the Bushmills Toast, launched by Bushmills Irish Whiskey on St Patrick’s Day and which was inspired by the ancient ritual of honouring someone with a drink. He is also one of the few people to have played one of the limited edition Bushmills x Lowden guitars (pictured) made by acclaimed guitar maker George Lowden.

“In this day and age things are moving so quickly,” he says. “For me the toast was a reminder that things that are old or have been around for centuries can still succeed today.”

He adds: “As Irish people we are quite emotional and everything is always on the surface. The character and the characteristics we have as people is something that will never get lost in amongst all the new developments and technology.”

Lavery still loves getting home to Aghagallon, where the biggest welcome comes from his cocker spaniel, Hugo. “He’s about as needy as I am, so we balance out well together.”

He adds: “No matter what happens with my music or wherever I am while away, I’m still Ciaran who was seven or eight years old kicking a football. No one talks to me about music; they just talk to me about home.”