Future proof: is your business ready for the post-digital age?

To succeed in the future businesses will need to master emerging technologies but also prioritise trust, responsibility, privacy and security 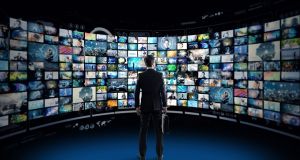 If digital is ubiquitous, how are you going to differentiate your business? Photograph: iStock

“It’s not that digital is over, it is that it is everywhere,” explains Paul Daugherty, Accenture’s chief technology and innovation officer.

He leads the company’s Technology and Ecosystem Group, is a member of its Global Management Committee and is responsible for driving innovation through R&D in Accenture Labs, leveraging emerging technologies to bring the newest innovation to clients globally.

He also founded, and oversees, Accenture Ventures, so when it comes to technology, if anyone can see around corners, it is Daugherty.

“Last year companies spent $1.1 trillion on digital transformation. Some 94 per cent of companies say they have digital strategies in place. Many are developing omni-channel platforms. So what we are saying about the post-digital era is that there is a new set of forces coming,” says Daugherty.

If digital is ubiquitous, how are you going to differentiate your business? It’s like trying to promote yourself to customers by saying your business is electric.

“Companies are going to need a new set of strategies because what they are doing now is not enough anymore.”

We are also at an inflexion point in terms of our attitudes to technology, he says. Up until recently it was almost universally viewed as “a golden tool, creating opportunities”. People felt generally positively towards it.

But “technology is moving from something we use to becoming who we are. Companies have to recognise that trust is the key differential,” says Daugherty. In the future, only those companies that have built trust will succeed. “Trust will become the ultimate currency in the post-digital era.”

Companies also need to “internalise” the fact that the pace of change will never be slower than it is at this time. “It’s relentless, and increasing,” he says.

Added to that is the transition beyond personalisation to individualisation. By that he means moving from knowing a little bit about a customer’s demographic and shopping habits, for example, to making product specifically for them.

Think Adidas’s completely automated Speedfactory, designed to produce limited runs of customisable product. It only works where a brand has trust. “Individualisation is very powerful but very scary to consumers too.” Any business that “steps out of line” and breaches that trust, will lose, he says.

Amazon Key, an in-home delivery service that allows the company gain access to shoppers’ homes, and Walmart’s pilot, which goes further, packing your groceries into your cupboards, shows just how important trust will be to success.

Among the biggest tech trends Accenture sees in its latest Technology Vision report is what it calls DARQ Power. The acronym stands, loosely, for Distributed ledger technologies, such as those which underpin crypto currencies; Artificial intelligence; extended reality – an amalgam of virtual, augmented and mixed reality; plus quantum computing.

If there is one “alpha” trend overarching all, it is artificial intelligence

Some combination of these deep-tech, fundamental research-based innovations will drive the post-digital opportunities of the future and they’re the next wave of technologies that organisations will need to master.

We're already seeing the growth of distributed ledger technologies in the rise of Bitcoin and Ethereum, and most recently in the launch of Facebook’s Libra currency. But it is impacting everything from the way in which major airlines organise loyalty programmes to the way pharmaceutical companies track drugs. New use cases are emerging daily.

Extended reality is being seen in the way, for example, Airbus uses augmented reality to help with the assembly of aircrafts more efficiently, translating information “on the fly” for parts coming in from all over Europe, says Daugherty.

Quantum computing, while still at its early stages, is advancing rapidly. Accenture has already worked with clients in the biopharmaceutical sector which have used it for molecule matching work that would have been very difficult to solve with classical computing.

If there is one “alpha” trend overarching all, it is artificial intelligence. “It shapes all other trends and has the potential to reshape the world around us,” says Daugherty.

The other tectonic shift that technology is giving rise to is what Accenture identifies as the Human + Worker, a theme on which Daugherty has published extensively, including a book Human + Machine: Reimaging Work in the Age of AI. The profits raised from its sales go to a charity that helps middle-age, middle-stage workers to retrain and upskill.

This is the cohort of worker most at risk from the changes ahead.

Daugherty wrote the book because he was disturbed by a prevailing narrative that technology was coming to steal our jobs. Not so. Every technology, since the discovery of fire, could be used for either good or bad, and it was used for good, he points out.

“Human civilisation has evolved on the basis of the question ‘how do we use this new technology to improve our lives?’. The reality here too is that AI has the potential to create new industries, new jobs and new opportunities. It’s not a lack of new jobs that will be the problem, it’s the lack of skills,” he says. “We are not preparing people fast enough for the new jobs that are coming.”

Today, search engine optimisers are highly sought after by firms across the globe. That’s a job that didn’t exist 20 years.

So what can companies do to cope? For Daugherty, it’s about investing in the three Ts – technology, talent and trust.

“This is a technology-driven revolution. Talent means focusing not just on tech talent, but on the workforce as a whole. Every employee is going to change, and the jobs market is not going to create the skills they need, so companies will have to do it for themselves.”

The biggest skills shortages will not be tech skills, it will be people who understand the human context of tech developments. “Liberal arts graduates infused with tech awareness is where the biggest shortfalls of the future will be.”

Work in DARQ Power and Human + Worker-related fields is gathering pace in Ireland. One of the pilot projects Accenture has worked on together with the Office of the Revenue Commissioner’s is the use of a voice-driven virtual digital agent (VDA) to help taxpayers with its telephone service for individuals requiring a tax clearance certificate.

This VDA handles the user authentication, applications and general queries related to tax clearance status. In excess of 7,000 calls have been dealt with to date with 70 per cent of the tax clearance applications processed without the need for human intervention. “Voice recognition has been around everywhere for a long time, but the technology was clunky. It is the AI that makes it work. This innovative pilot improves taxpayer interaction and operational efficiency while also taking full account of requirements regarding confidentiality and security of data,” says Dave Kirwan, Accenture’s head of technology in Ireland.

“We should be very proud as a nation of our tax administration. Revenue are often held up as exemplars to revenue authorities in other countries. Most recently the VDA pilot won the award for the best use of artificial intelligence in Government at the prestigious CogX festival in London.”

On the Human + Worker side, Accenture is leveraging virtual reality and artificial intelligence in its own graduate recruitment process. Applicants use virtual reality goggles to respond to real-life scenarios in a dynamic online environment.

Accenture is working on an internal AI system which provides personalised coaching, helping individuals see what the possible next step for their career progression might be. It’s also working with clients on ways in which AI can help on the factory floor, by suggesting optimal production sequencing.

“All clients know they need to be doing stuff in this space,” says Kirwan. “The challenge is, how do they know which technology to go with and which is the most relevant use case to pick, the one that allows them to get the most value from the investment.”

To find out more about Accenture’s 2019 Technology Vision, view the report: The Post-Digital Era is Upon Us: Are You Ready for What’s Next?