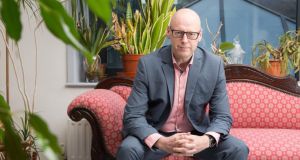 Andrew Burke: “The key thing is that you’d expect to see a few world class business schools with that level of industry.” Photograph: Paul Sharp/Sharppix

“To have a world class university, you need to have a world class business school as part of that.”
So says Andrew Burke, dean of Trinity Business School, which is in the final stages of completing a new €80 million school, the first university building in the history of the State that was funded without taxpayers’ money.
Household names, in terms of universities, now tend to have those world class business schools, he adds, but notes that the more “ancient” universities, like Trinity, Cambridge or Oxford, took some time to come around to that thinking.
As competition internationally heats up in the area of business schools, Trinity was beginning to feel somewhat left behind, especially when its biggest competitor in Dublin, University College Dublin, had invested significantly in growing its business school presence and dealing with the influx of foreign, and often higher paying, students that brings.

Indeed, it was the internationalisation of business itself that prompted Trinity to consider substantial investment in growing its name in the business community.
According to Burke, a business school graduate wants to pitch up anywhere in the world and for people to know the school they went to, know how good it is and know that it’s internationally relevant.
Armed with that toolkit of ideas, Trinity set about to take the more expensive, but more rewarding road, of building a better business school on its city centre campus.
Ireland, Burke says, was punching below its weight on the international business school front.
“The key thing is that you’d expect to see a few world class business schools with that level of industry,” he says, referring to the significant presence of multinational companies in the Republic.
So to grow its presence, the university set about getting “world class facilities” and in the past four years alone has grown  by 127 per cent, making it entirely self-funded.

When Burke arrived, the Government’s pockets were virtually empty after the recession and he saw a strategy to develop the school into a truly international one with a deeper range of faculties and services commensurate with its rivals.
And to compete, they immediately set about obtaining EQUIS accreditation, a comprehensive institutional accreditation system for business and management schools. “Everybody got on board with making this happen,” he reflects.
Nevertheless they had to make a success of it, given the fact that the university is next door to a major European financial centre, close to Europe’s digital capital and a few doors down from a European focused parliament.
So, to develop a truly international school that has its routes firmly in the local community, the school under Burke’s leadership first developed its vision for the coming five years.

The first pillar was to build a school well linked and engaged with its local industry. As a result, it has developed a centre for digital business and put focus on finance and entrepreneurship, already becoming one of the top rated European schools for entrepreneurship.
Secondly, it wanted to improve its community links. With that aim in mind, the building has areas for hotdesking and alumni. In future, the school is going to scope out flexible education to better cater to students with other commitments.
Additionally, it also wants to focus on social inclusion to so that the school isn’t limited to those from affluent backgrounds.

With these goals, Trinity wants to ensure that Ireland has a buoyant business school market, to increase competition for those coming

The fourth area of focus is in terms of ethical leadership. “Businesses so often put environment on the agenda and then once there’s a financial downturn that goes off the agenda,” Burke says as an example.
So, he says, the aim is to put business managers out into the world who want to change the perception of markets so that consumers, in turn, make the ethical decisions.
“Our vision is to develop managers with a moral compass and towards ethical leadership; social inclusion in education; providing a life-long community of learners, influencers and co-operators who are a force for good in business; and mirroring and enhancing the industry and university expertise in Dublin.”

With these goals, Trinity wants to ensure that Ireland has a buoyant business school market, to increase competition for those coming from both the international and local community.
For Ireland Inc, it’s also important. “The industry now generates a considerable amount of income in terms of export income,” Burke says, adding that while there is an influx of international students, they aren’t taking the places of Irish students.

While broadly positive, he has some concerns, particularly because of the high cost of education in business schools.

Even with challenges, there are benefits for the country including supplying graduates into Ireland’s more modern industries

Due to salary restrictions, Burke says competition with American and European schools is tough.
“If Brexit happens you’ll find a major brand from the UK setting up a campus in Dublin. It only takes one major brand and we’ll have head-on competition on our doorstep.
“It’s extremely fortunate that Trinity went on this strategy because now I’m pretty bullish that we’d be well able to deal with that. If that had happened five or six years ago the competitors would have soaked up the market share.”
Even with those challenges, there are benefits for the country including supplying graduates into Ireland’s more modern industries. International schools inform graduates as to how international markets operate.
But more important than that is the fact that the school can widen the socio-economic demographic of students studying there. That has the added benefit of making a strategic change in terms of priorities for companies.