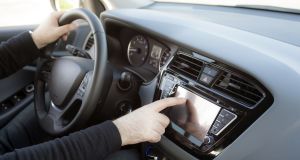 Apple CarPlay and Android Auto have been gradually adopted by many of the major car brands. Photograph: iStock

In-car technology continues to be a key area of focus across the automotive industry, as a significant number of drivers are won over by the features that a new generation of vehicle offers.

“Technology has become the deciding factor for car buyers selecting a vehicle” says Michelle Krebs, senior analyst at Autotrader, whose study in the US suggested that 48 per cent of car owners valued in-car technology above brand or body style. That almost half of drivers would lean towards the car’s technological features above other factors marks a significant milestone in consumer behaviour within the industry.

In recent years, much of the technology that goes into a new car has revolved around safety factors, with on-board cameras and sensors to monitor blind spots, provide lane departure warnings, and brake assist and collision detection becoming major selling points as the technology has been developed and adopted across the major brands.

But Autotrader’s report suggests that while drivers are engaged with safety technology, it is the entertainment and convenience features that are proving to be the biggest draw. As Irish homes and businesses have started to embrace a smart technology trend led by the US, it is no surprise that drivers here are starting to expect some of the same level of connectivity in their cars.

“The simple fact is that people want seamless integration between their device and their car – that is what we are aiming to deliver” says Richard Molloy, head of marketing and product at Audi Ireland.

The path to a seamless experience has been incremental. A decade ago, navigating to a new location would likely have involved thumbing through spiral-bound road maps, or printing out a route plotted online. That process became redundant with the advent of standalone Sat Nav units, and then as in-built dash displays and GPS have become the standard, the paraphernalia of charging cables and suction cups has also started to be a thing of the past. “If you are route-planning at home on our app” explains Molloy, “you can send it straight to the car so when get in the seat, the route is preloaded on your Sat Nav and you’re ready to go.”

That level of integration between car and phone has been made significantly simpler for the driver since the launch of Apple CarPlay and Android Auto in 2014, which set the current standard for the kind of infotainment experience that users can expect.

Both services have been gradually adopted by many of the major car brands, and drivers of cars launched prior to 2014 have also been able to access the services either through manufacturer’s rolling out over-the-air updates, or through third-party retrofitting of compatible displays.

Both Android Auto and Apple CarPlay connect with your phone and display a slimmed-down version of your phone’s operating system on your dash display. This provides access maps and navigation, including weather and traffic alerts. They also provide access to media and music-streaming services like Spotify. Incoming messages and important notifications can be tapped on to be read aloud, and responses can be dictated using your phone’s voice-recognition software, while any notifications that are not essential to driving, such as news or sports updates, are filtered and can be checked when you are stopped. These kinds of features have proven popular with drivers, particularly as they are accessed through a familiar interface.

The ability to adapt to changes in technology is important, according to Nollaig Breen, head of product for Toyota Ireland. The Japanese manufacturer recently announced plans to offer Android Auto and Apple CarPlay compatibility in its newest range. Commenting on the potential to roll out over-the-air updates to older models, Breen says: “We were very early in the market with touch screens. A lot of our units in operation have the potential to be updated as technology develops, so they can be upgraded with new connectivity features.”

Like Toyota, other manufacturers are likely to need to continue rolling out updates to existing models as technology develops further in coming years. While Android Auto and Apple CarPlay are currently ensconced as the infotainment standard, there are likely to be further changes and adaptations in the near future – most likely in the shape of Amazon’s Alexa.

Amazon’s digital assistant is poised to push into the in-car infotainment market, with several manufacturers showing interest in Amazon’s cloud-based voice service, and Ford already rolling it out over a select range in the US. Speaking when the partnership was announced, vice-president of Amazon Alexa Steve Rabuchin said: “We believe voice is the future, and this is particularly true in cars. The ability to use your voice to control your smart home, access entertainment, manage to-do lists and more makes for an extraordinary driving experience.”

Alexa has a potential to offer a unique level of integration between home and car, due to existing Amazon smart-home technology. Current levels of Alexa integration in cars allow drivers to use voice commands to resume music and audiobooks they were listening to at home, order items on Amazon, and sync navigation routes and searches from their home device. From home, users can use voice commands to check battery charge or fuel level on their vehicle, lock and unlock doors, and start or stop the engine remotely.

If full integration between Amazon’s car and home services is delivered, this would mean a driver would have access to all of Alexa’s commands – that includes the ability to control house lights and heat while driving, or ordering a Starbucks coffee for collection on the way to work. As the technology continues to evolve, the potential grows. “The tech element is always something that every manufacturer is striving to advance,” says Toyota’s Nollaig Breen. “It is a huge area that is ripe for change and for development.”

Also in Tech on Wheels

Technology to eliminate driver from the equation already exists

Research pushes towards next landmark in operation of cars

Leading the charge in electric cars

Electrics and hybrids: Eight of the best

The connected car: is this the future of driving?

Irish motorists not feeling the buzz of the electric car

Six of the best tech features already available to buyers

In the race to deploy driverless public transport, Singapore builds a mini town