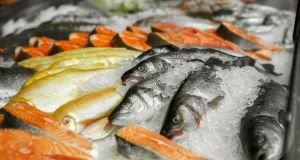 Verifish was developed by a former fisherman Frank Fleming and provides assurance to consumers around the provenance of the fish, from fishing boat to supermarket shelf.

Good supply chain management is something we take for granted until a crisis – such as say, a global pandemic – hits and supermarket shelves are cleared of soap within hours.

That supply chains ultimately proved so resilient this year – considering the Christmas-magnitude spending frenzy that took place in March – is testament to the professionalism of the sector.

This includes not just highly skilled personnel, often with specialist SCM qualifications behind them, but the increased use of highly innovative technology too. It’s something Lorcan Sheehan sees firsthand as chief executive of PerformanceSC Supply Chain, a specialist consultancy.

“Every time you move, buy or sell something you leave a data trail, increasingly it’s about using that data to see how you could do things better, to figure out if you have you enough of the stock that you need, and that it is being manufactured in the right place,” he explains.

It’s not just logistics, however. Technology is helping too with issues relating to risk and compliance, something on which first Brexit, and now Covid, has helped focus minds like never before, he says.

Despite the external travails affecting the sector, the rise of what is called Factory 4.0, which sees sensor-based Internet of Things (IoT) technology increasingly automating factories and warehouses, is helping to generate efficiencies.

Now even newer technologies, such as blockchain software, are having an impact too, he says. Blockchain isn’t created by just one central authority, such as, for example, one party to a transaction. Instead it allows for a totally decentralised platform, operating off what is sometimes referred to as a “distributed ledger” that allows for any change, movement or transaction – in anything from currencies to energy generation – to be recorded, viewed, and shared, multiple times, with complete transparency at every step.

Because whatever changes are made become immutable, it is seen as having particular application in the supply chain of such goods as pharmaceuticals, providing a verifiable log for end users that a certain drug was created in a particular factory and delivered across the world at the correct temperature, for example, or stored in a warehouse with the correct humidity.

In a world where medicines are increasingly purchased online, such information could provide valuable reassurance.

It offers particular potential for the food industry, providing assurance to consumers around issues such as provenance and trackability of food.

Already supermarket chain Aldi has embraced the pioneering work of Galway blockchain developer Verifish – developed by former fisherman Frank Fleming – which provides assurance to consumers around the provenance of the fish, from fishing boat to supermarket shelf, so that they can be assured it was caught in a sustainable manner.

Blockchain could just as easily be used in the case of honey, some jars of which command a premium simply because consumers like the reassurance of knowing where or how it was sourced, such as Manuka honey, points out Sheehan.

Blockchain is the technology having the biggest impact in supply chain management right now, says Kevin Curran, a professor of cybersecurity at Ulster University. “It can give credibility and traceability throughout the supply chain, allowing you to monitor a good end to end. When you combine it with Internet of Things technology, sensors, you can track that a food item was kept, end to end, at the required temperature, including in the vans delivering it,” he says.

It is, however, still in its early stages and as such faces particular challenges in relation to a shortage of skills, as well as the time, effort and resources required of manufacturing companies to overhaul their IT systems to allow it.

Despite such challenges its rise is likely to be inexorable as that of the cryptocurrencies which initially brought blockchain to light (it’s the platform that underpins digital currencies such as Bitcoin).

The use-cases for blockchain therefore stretch far beyond the supply chain, including to things like secure, anonymous voting, he points out.

But it remains particularly compelling for the food chain, particularly when linked with batter free RFID (radio frequency identification) tags. For example, when linked to an RFID chip in a cow’s ear, it can provide genuine farm to fork trackability, says Curran.

It isn’t risk free. Blockchain could be misappropriated to provide a false degree of comfort to consumers about the supply chain journey a food product has been on since it left a factory. It could be used, for example, by a food manufacturer who deliberately decides to adulterate their own product to make a saving, swapping in, say, salt, in place of milk powder.

“No supply chain in the world can guard against that because it’s happening at the ingredients stage,” cautions Kevin Curran.

The other risk weighing against new technologies such as blockchain is where the people using them in the supply chain don’t fully embrace them.

That risk has been identified in recent research from Trevor Cadden, senior lecturer in operations management at Ulster University.

He works with companies across Ireland under the Fusion programme, IntrerTrade Ireland’s cross-Border innovation initiative. His research suggests that to really succeed in harnessing the potential of new SCM technology, employee education is required. At its simplest, it’s about ensuring people realise they are “never going to be replaced by a button”, says Cadden.

“A fear of technology is a challenge in so far as, for IoT and new technology to be really successful, firms first need to have the right culture in place, which is about awareness, education and trust. The social-technical interface is critical to making it work because the most efficient piece of technology in the world can’t work if people don’t accept it,” says Cadden.

How has Ireland’s food supply chain coped with Covid and what’s next?

Are you Brexit ready? Here’s what Irish exporters need to know

How are companies managing supply chains through Covid?