Forget the pub or club, the way to find your soulmate these days is through a dating app 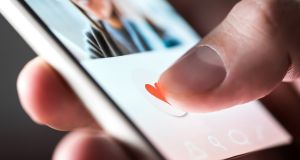 It is thought that in 10 years’ time, more than half of all relationships will begin with online contact. Photograph: iStock

In the past, finding your soulmate was easy – you just married the girl (or boy) next door. This isn’t being facetious; records show the majority of marriages in the beginning of the last century took place with close neighbours, if not from the same townland, then only the next village. Perhaps a local matchmaker who knew both families made the fateful introduction.

Fast forward to 2019, and you can take your pick from the global village as social media and apps allow love to know no borders, while finding happily ever after is more likely to be due to a sophisticated algorithm. In fact, meeting online has now become the most common way a relationship begins, with about one-third of couples having originally connected via an app.

Dating apps and websites are becoming increasingly niche – MouseMingle for Disney lovers, anyone? – but the major action still takes place within a few popular ones. The mainstays Tinder and Plenty of Fish have been joined by upstarts such as Bumble, where the woman has to make the first move, while Happn allows you to match up with people you’ve crossed paths with IRL (that’s in real life, in case you didn’t know).

Technology has revolutionised the way we date and fall in love, says consultant psychotherapist and relationship expert Stephanie Regan.

“Up until about six or seven years ago, there was still a bit of a stigma about meeting online, but now it’s nothing. There is no negativity associated with it anymore.”

The use of dating apps is now so ubiquitous that all the chatting up and flirting occurs solely online, says Regan. Is it such a bad thing that no longer will a stranger sidle up to you as you enjoy your overpriced cocktail and utter the hallowed words “D’ya come here often?”

Yet plus ça change, because Regan maintains that although dating may now be driven by technology, it’s not that different to how things always were.

“They might be judging people based on their photo, but that’s the way it always was – you approached someone in a bar depending on whether you liked the look of them.”

While younger generations have fully embraced online dating, those in their 40s, 50s, and 60s may find this transition more difficult, admits Regan. “Men and women who have separated, and are looking for love again, can be resistant to the idea of it. But they have to change, because this is just the way things are now. I try to explain the practicality of it to them – if you are a single mum at home with the kids, how on earth would you get out to meet someone new?”

The key is to not take it too seriously, Regan advises.

“I tell them not to overinvest in it. Younger people just swipe away, and that’s the way everyone should be using it. Older adults are trying to find someone they can click with and I don’t really encourage that, I just tell them to meet a few people for a coffee or a walk, not a proper date. Overinvestment can leave people vulnerable.”

As technology evolves, dating apps are integrating with other services to offer even more bespoke solutions. For example, this year Tinder launched its “Festival Mode”, whereby users could add badges to their profiles declaring which live gig or festival they would be attending, making it easier than ever to be in the right place at the right time.

Dating apps are also harnessing the power of technologies such as facial recognition, artificial intelligence (AI), and augmented reality in a bid to combat “swipe fatigue”. The app AIMM says it is the first to combine matchmaking with artificial intelligence, and is designed to resemble a human matchmaker, negating the need to swipe to find a match (it also says it is the first app to use “respect” as a core feature of its development – eye-roll emoji). Last year, UK dating app Loveflutter announced plans to use AI to analyse chats between its users to determine their compatibility and suggest when and where they should meet.

Regan believes video is the way forward and should replace the one-dimensional photograph and carefully worded bio. “It would be a great way to get a better idea of what someone is like and what they are into.”

Whatever app you prefer, Regan says the reality is that online matchmaking is here to stay. She says it is thought that in 10 years’ time, more than half of all relationships will begin with online contact.

“Right now, they say that one in three relationships begins online and I would believe that. There’s around 1.3 million singles in Ireland and most of them have clicked into this, so if you decide you aren’t going online then you are missing out on meeting them.”

The smart money is on connected devices

Tips to turn your home smart

How an app a day can keep the doctor away