The UK’s departure from the EU has had little impact on M&A activity, say experts . . . so far 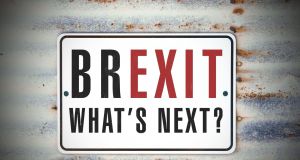 “We will still be talking about Brexit-related work in five years’ time – and beyond.” Photograph: iStock

Far from being over, Brexit is only getting started. It is perhaps why, so far, its impact on corporate deal-making has been less marked than anticipated.

“Everyone expected Brexit to have a greater impact on 2019 than it did,” says Katharine Byrne, partner at BDO Corporate Finance.

In certain sectors, due diligence is taking longer but in the main it’s business as usual, indeed, maybe more so.

There is an uptick in business owners looking to sell for a start. “People are either looking to sell fully or partially, in order to take some cash off the table and scale up. We are seeing some selling maybe 75 or 50 per cent of their shares, with a view to coming back for a full exit later,” says Byrne.

It helps that Ireland is attracting increased attention from UK private equity. Currently, there are about 600 private equity houses active in the UK – in Ireland there are only about a dozen.

I think it has probably had a negative effect on private equity deal volumes in the UK, and that can have a spill-over effect on activity in the Irish market

In the main, mid-market Irish companies have proven robust in terms of valuations, helped by the fact that trade buyers from the UK and other non-EU countries are also looking at it as a way into the EU.

“For vendors considering a sale, valuations now are very good, which is why more are coming to market and are looking at private equity to enable a future exit,” says Byrne.

Not all sectors are faring equally. While both financial services and business services are proving resilient so far, in food and drink this is less the case, with valuation gaps opening up that are encouraging a more cautious, wait-and-see approach among vendors, particularly those with a significant UK exposure.

Overall, however, the mood remains remarkably optimistic. “Businesses need mergers and acquisitions to grow. As more private equity and funding becomes available, companies are stepping forward to avail of it,” says Byrne.

Where five years ago buyers were looking for EBITDA (earnings before interest, tax, depreciation and amortization – a common measure of a company’s operating performance) of €5 million and more, now they will look at €1 million and up, she says. “There is now a demand to get involved in good-quality businesses at an earlier stage.”

M&A activity is built on the confidence of an economy and the availability of funding, “but you still need good strong businesses with good management teams,” and that’s something Ireland has. “The success stories of MBOs and the sales of owner-managed businesses is triggering others to come forward.”

It helps that experience has seen the Irish business community’s view of private equity (PE) change significantly too. A BDO survey of UK and Ireland PE companies over five years shows revenues typically go up by 50 per cent and employment by 40 per cent after a deal.

A few years ago we expected more M&A activity to have a clear Brexit strategic angle or reason, but it hasn’t quite worked out that wa

“The old-fashioned notion of PE as asset stripper is passé and understood as that. It is now understood as a flexible form of funding enabling the management of fast-growing businesses to scale up, and will continue to be a key driver,” says Byrne.

Some aspects of the Brexit effect may have peaked. “In particular, regulated financial service providers based in the UK who want to ensure they will continue to have unfettered access to EU markets from next year have in large part already had to bite the bullet and establish in Ireland or another EU member state,” says Stephen Keogh, head of law firm William Fry’s corporate department.

We will continue to see significant Brexit-related activity, “both from other types of UK businesses deciding it makes sense to continue to a have a significant presence in the EU and also from US and other international businesses who will now choose Ireland . . . over the UK as their preferred location for a European headquarters,” he says.

Brexit will cause some London-based private equity funds to consider moving abroad, but not to Ireland, he reckons. “I think it has probably had a negative effect on private equity deal volumes in the UK, and that can have a spill-over effect on activity in the Irish market,” he cautions.

While there will likely be outbound opportunities for Irish companies, until we know more about the future UK-EU trading relationship, it is hard to predict where these will lie, he says. However, “one immediate consequence of a bad Brexit deal for the UK would probably be a drop in the value of sterling, which would make UK businesses and assets more attractive to Irish bidders.”

Mark Ward, corporate partner at law firm A&L Goodbody, is sanguine. “It’s interesting, a few years ago we expected more M&A activity to have a clear Brexit strategic angle or reason, but it hasn’t quite worked out that way,” he says.

Other deal dynamics and reasons for a deal, other than Brexit impacts, have to work also

Some have, such as insurance-related deals where an Irish Central Bank licence has been an attractive part of a deal for a buyer. Other Brexit-related deals have been acquisitions of Irish businesses as opposed to UK alternatives, partly because Ireland remains in the EU.

“But for most M&A deals, Brexit has not necessarily been the primary reason for a deal. Other deal dynamics and reasons for a deal, other than Brexit impacts, have to work also and don’t forget there are 26 other countries where EU membership as a requirement of a deal is also satisfied,” says Ward.

What he has seen, through the law firm’s Belfast office, is recent interest from Northern Irish businesses in acquiring assets in the Republic “as a hedge for the inevitable changes Brexit will bring”, he says. That comes even though some of those changes won’t become apparent for years yet. “We will still be talking about Brexit-related work in five years’ time – and beyond.”