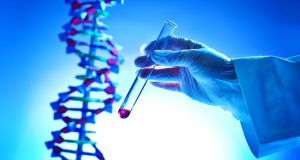 “Life sciences is a really exciting space because you are developing technologies and medicines that are transforming people’s lives.” Photograph: iStock

Competitive salaries and an ability to offer a clear sense of purpose helps companies in the life sciences sector attract and retain talent.

That goes for both large international companies and home-grown ones such as ICON, the Dublin-headquartered, Nasdaq-listed global provider of outsourced development services to the pharmaceutical, biotechnology and medical device industries.

ICON, which employs over 14,600 people, celebrates its 30th anniversary next year and has won a number of awards as a good employer. This matters at a time when the pace of change within the industry is getting faster, says Dr Nuala Murphy, president of Clinical Research Services at ICON.

The focus is on “bringing drugs to patients faster than ever”, she says, including finding ways to reduce the cycle times involved in drug development.

Because ICON provides end-to-end services in clinical research, it requires a wide range of specialist skills, from regulatory experts to physicians, biostatisticians and medical imagery personnel. Increasingly, it is seeing demand for data and analytics expertise too.

For Murphy, the key to retaining talent is to recruit the right people at the outset. The right corporate culture helps attract them. “We are Irish-headquartered with a strong heritage of innovation. People like that and the fact that we are growing too,” she says.

That is a key part of the appeal at Takeda Pharmaceutical in Dunboyne, Co Meath, which Susan Hynes, the site lead, refers to as “Dunboyne University”.

Construction of the $600 million state-of-the-art facility, which will produce products for patients with rare diseases, started at the end of 2017. It will go into commercial operation towards the end of 2020, employing more than 300 people.

These enable it change production processes at speed, as new products emerge. “We make products in very small batch sizes, which can change very quickly. The industry is changing, patients’ medical needs are changing, and being able to switch products with a much faster turnaround eliminates the need for cleaning, which is better for the environment too,” explains Hynes.

“The level of complexity involved has gone up in life sciences generally, and the level of innovation involved is higher, so a highly skilled workforce is required.”

Takeda aims to simplify the production process, to serve patients more quickly. There are about 7,000 rare diseases in the world, but only 5 per cent of those diseases have a treatment, Hynes points out. The need for innovation, to discover and develop the treatments required to support those patients, is huge.

Time is off the essence too, as, because it is a much smaller patient population group, it can take up to seven years for a patient with a rare disease to get a diagnosis.

Takeda is currently partnering with Microsoft to help get those diagnoses faster. Such collaborations are in part why the skills sets required in life sciences are changing. In the past, they were largely chemistry-based. Now, the sector is moving increasingly into biologics, and starting to see the emergence of cell therapy and gene therapy.

“It’s not just about the science changing though but also the way we work is changing,” says Hynes. It’s a fact recognised by third-level colleges. Degrees in the field are extending such that chemical engineers receive modules in subjects like data analysis and project management, for example, to broaden their skill set. “The universities and institutes of education are adapting to provide a lot more of the skills the industry requires.” she says.

Government-funded research institutes such as NIBERT and Tyndall are also a vital component of the sector’s success, and part of the reason Ireland is “punching above its weight” according to Tim Cotter, life sciences lead for Grant Thornton’s business consulting team.

This is good because it’s a sector with a good geographical spread. “We have clusters developed not just in the main centres of Dublin, Galway and Cork but emerging in the north-west and in Limerick now too,” he says.

The growth of big data and artificial intelligence will lead to a change in the skill sets required, and will result in retraining of some existing staff. “In particular, robotic process automation (RPA) is being implemented heavily in back offices, wherever steps are repeatable and rules-based procedures exist, freeing up time for staff to get involved in value-added work,” Cotter says.

The move by tech companies such as Google and Apple into healthcare and life sciences shows just how much the sector is changing. The move towards value-based healthcare and a shift in research towards once-off rather than chronic treatments are also evident.

The calibre of Ireland’s research institutes helps attract researchers from overseas to work here, a fact that augurs well for Ireland’s continued ability to compete internationally. The fact that the sector is supported by the Government, through the National Development Plan, is a mark of its importance.

While Ireland is competitive in terms of remuneration, increasingly that is not the only factor which entrants to the industry weigh up. A sense of purpose matters increasingly too. “Life sciences is a really exciting space because you are developing technologies and medicines that are transforming people’s lives,” says Cotter. “That’s hugely exciting.”