With bigger batteries than ever, have new electric cars wiped out the worry of finding a charging point? 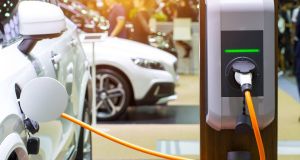 There are few motoring-related anxiety attacks more acute than seeing the low charge light start flashing in an electric car when you’re still short of a charging point. Photograph: iStock

It was no joke. The terror was real. There are few motoring-related anxiety attacks more acute than seeing the low charge light start flashing in an electric car when you’re still a few kilometres short of a charging point. Needless to say, this was at its worst with the first generation of electric cars, few of which could put more than 160km between plug-ins, and that only in the most ideal circumstances. Many was the occasion when you’d slide into the charging space with either a single-digit range left on the display, or worse – just a flashing warning that your battery was about to die.

Are those days now gone? We now have several electric cars on the road, available to buy right now, that can put 450km between charges, and that’s not a theoretical figure. It’s actually a surprisingly realistic one (and even the more optimistic claims usually work out at more than 350km on a full charge, in real-world conditions). Even long motorway journeys, previously all-but verboten for an electric car, are now a realistic, even mundane proposition.

“For sure, higher range batteries and the increased availability of fast chargers will significantly reduce range anxiety,” Gerrit Heimberg, brand director of Volkswagen in Ireland told The Irish Times. “With the introduction of the ID.3 [VW’s new all-electric hatchback which goes on sale early next year], Volkswagen will offer battery ranges from 330km, 420km or 550km. That means that a customer should very rarely need a charging point outside of their own home or workplace. And if they do, at charging points like IONITY, they can recharge to 290km in 30 minutes.”

Those IONITY charging points, part of a consortium that includes Volkswagen, BMW, Mercedes, Hyundai, and Ford, are ultra-fast chargers, capable of pumping power into your batteries at an output of 150kW. For comparison, the existing fast-charger network uses 50kW chargers (which will take about an hour to deliver an 80 per cent charge to the newest, largest batteries), so clearly the more IONITY chargers, and similar, that can be installed, the further into the past range anxiety will recede.

“It is very important that the customer ask themselves: ‘How often do I travel more than 400km without a stop throughout the year?’” says Mr Heimberg. “Most buyers who have the opportunity to charge at home at their workplace will start each journey with 420km remaining range. And let’s not forget that many of our customers will have two cars in the household, so why not go electric with one car in the household, and benefit from the grants and other savings and make this eye-opening experience?”

It’s a fair point, but there is still a major issue. For all that car makers have begun to fill their cars with ever bigger batteries, and for all that the likes of IONITY and Tesla can boast of extra-fast charging points, the fact is that the national charging point network is still in quite a poor state. The “out of service” rate is about 20 per cent for public chargers, both fast and slow, and increasingly there are queues to use the ones that are working. Range anxiety comes crashing back in once you’re struggling to find somewhere to plug-in, when you are on a longer journey.

Thankfully, hopefully, that too should in due course be a thing of the past. A spokesperson for the ESB told The Irish Times: “ESB e-cars will begin a €20 million programme later in the year to expand and enhance the charging network across Ireland. In parallel, we are assessing suitable sites on motorways and national road networks, which will see more than 50 high power charging hubs on such sites. These hubs will be able to charge between two and eight vehicles simultaneously and are capable of providing up to 100km of electric driving range in as little as six minutes.”

To such public charging initiatives will be added programmes such as those of Ford and VW, which will provide owners with home-charging wall-boxes, and preferential electricity tariffs for both home and public charging. Added to which is the reminder that, even without such tariffs, using electricity to fuel your car is 75 per cent cheaper than using fuel, so there’s a massive incentive even before you get to Government grants and cheaper road tolls.

Put all of that together and make it work, and range anxiety will truly be a thing of the past. In the meantime, it’s at least a little further back in the rear view mirror.