With many employers unaware of the scale of the problem, HR professionals are calling for legislation to address gender pay 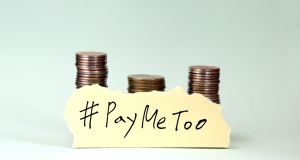 The European Commission reported in 2014 that Ireland had an average gender pay gap of 13.9 per cent, which compared relatively favourably with the EU average of 16.7 per cent. #PayMeToo as a new campaign to close the wage gap between men and women. Photograph: iStock

According to the HR professional body CIPD, the gender pay gap in Ireland – the differential between the average pay of males and females within an organisation – is estimated at an average of 14 per cent.

Its recent pay and employment practices survey found that only a quarter of companies in Ireland admitted to having a gender pay gap. It also found that only one in five companies had calculated the scale of the problem within their own organisation. This, the CIPD concludes, shows the need for legislation to address this perennial issue.

The good news is that its members support legislation for annual reporting of the gender pay gap, including bonuses and shares. The CIPD HR Practices in Ireland 2019 survey identified a number of action areas for both Government and employers. Almost half of respondents said the Government needs to address childcare subsidies and career choice at second-level.

Union body Ictu also welcomes the Bill as part of a necessary step in creating change. However, it pointed out that gender pay gap reporting will initially be limited to organisations with more than 250 employees – thereby omitting about two-thirds of the workforce.

While the Bill proposes to lower that threshold to 50 after three years, Ictu would like to see this happening more quickly, and for consideration to be given to an even lower threshold, preferably 20 employees.

Its equality officer David Joyce has pointed out that, “As it currently stands, the Bill will capture just 1.4 per cent of firms and 57 per cent of all employees, based on the CSO’s 2016 Business demography data. Lowering the threshold to 20 employees would capture 70 per cent of employees.”

It noted too the absence of clear penalties for non-compliance in respect of companies that report inaccurate data, as well as those that fail to report. It is calling on the Government to enact the legislation without further delay, highlighting the fact that there is no commencement date as of yet and no indication as to how soon after companies will be required to report.

The European Commission reported in 2014 that Ireland had an average gender pay gap of 13.9 per cent, which compared relatively favourably with the EU average of 16.7 per cent. However, “female representation on publicly-listed companies in Ireland stands at just 13.2 per cent of board members compared with an EU average of 21.2 per cent,” says Helen McCarthy, senior consultant with Mercer Ireland.

Other countries have already introduced gender pay reporting legislation. “What we’ve seen in the UK is that the laws forcing companies to report on and be transparent about gender pay has been a good move in the right direction, putting companies under pressure to act,” says Sandra Ondraschek-Norris of Catalyst, a campaign group promoting women in leadership positions.

Catalyst’s UK research indicates that when women go into their first job, they do so earning less than from day one. “It’s a glass door as much as a glass ceiling.”

Once in, they do all the right things, but don’t advance at the same pace as men, “so different strategies are paying off for men. It’s the same workplace, but a different reality,” she says.

It is that lived experience that must be challenged, such as Catalyst’s research showing that men are promoted based on potential, while women are promoted on the basis of proven performance. Equally, it found that while women get as much mentoring as men, their mentors are less senior. On top of that are layered old tropes about men taking charge and women taking care.

The biggest barrier of all is the ‘double bind’, where by the clearest model of leadership in most companies is a male environment, so male characteristics are more acceptable.

All of this “plays into the gender pay gap”, which is why it is crucial men advocate for real change too, not just women. “Quite often, men are not aware of what their female colleagues are experiencing. The things women have to navigate, they don’t even have to think about,” says Ondraschek-Norris.

To succeed, eradicating the gender pay gap must be part of business strategy. “There’s no point just reporting a number and not doing things to promote an inclusive culture. Companies need to take a serious look at not just women’s representation and pay but the culture they are building.”

On the board walk: helping women advance at work

How women can escape the sticky floor of career stagnation

‘We want to make sure we are as inclusive as possible’

‘We need to pull women up, rather than always expecting them to push’

The glass ceiling: ‘Just getting one woman into a senior role isn’t enough’

Making your company attractive to people with disability

Meeting the needs of disabled employees

Flexibility needs to be more than just a policy

A long tradition of equality and diversity

Ageism in the workplace: An age-old problem

Out at work: how Irish companies celebrate diversity

The five benefits of a racially diverse workforce

Stem steps up to win women over

The third level of diversity