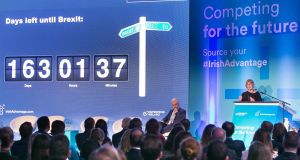 Irish companies are exporting more and more every year and even as Brexit headwinds persist, businesses in the Republic recorded another bumper year in 2017.

In 2017, export sales by client companies of the country’s export agency, Enterprise Ireland, rose 7 per cent to €22.71 billion, a new record.

This is the highest in the history of the agency and the eighth consecutive year of export growth for its client companies. Even in these challenging times of continuing Brexit uncertainty, trade rhetoric between the US and China and fears of increasing debt burdens in emerging markets, Irish businesses are working on market diversification strategies, and successfully so.

“This time last year when we had our markets week, 62 per cent of companies said they’d taken no action to get ready for Brexit, while recent research has shown that 85 per cent of our clients have taken action,” she said. So, her message is that irrespective of where Brexit negotiations end up, Irish businesses are fast becoming prepared.

Of course, it’s not as easy as simply making the decision to diversify. “You’re not going to go in, land on a plane, do a deal and get out again,” Sinnamon says. “My strong advice to anybody is do your homework first and be prepared to commit resources.”

Advice of that kind was on offer at International Markets Week, which saw a record 620 client companies engaging in more than 2,000 one-to-one meetings with the agency’s market advisers. That number is up on previous years, according to Sinnamon.

Indeed, events like International Markets Week is one of the reasons the Irish Government and its agencies have been recognised in Europe for its preparation in the face of Brexit. It offered a dedicated “Brexit Zone” to support companies for challenges including logistics, currency risk and supply chain optimisation.

Through its 33 international offices, Enterprise Ireland is now trying to build up the resilience of Irish companies, whatever sort of Brexit emerges.

“My messaging hasn’t changed since June 2016 and that is: prepare for the worst and hope for the best,” says Sinnamon, adding that companies have to have a plan B.

As part of its diversification drive, the agency is significantly increasing the number of trade missions it organises. By the end of this year, 60 Enterprise Ireland trade missions will have been led by Government Ministers. “Particularly for smaller companies, they give them a bit of credibility. If you’re inviting a target customer, it’s a great way of opening a door of opportunity,” Sinnamon says.

Additionally, through its four-year strategy which runs to 2020, the agency is looking to help companies improve competitiveness and become more innovative.

Tom Cusack, Enterprise Ireland’s director for Asia Pacific, says the shifting attitudes toward globalisation and free trade present a challenge to Ireland at home and abroad. “These shifts emphasise the importance for Ireland as an engaged global actor and a small, open economy to actively commit to work more closely with the Asia-Pacific region,” he says.

And that active engagement is increasing – more than 600 Irish companies now export about €2 billion worth of goods and services to the region. Exports by Enterprise Ireland client companies to the Asia-Pacific region grew by 9 per cent last year and by 29 per cent to Japan alone.

Japan is becoming a far more accessible market for Irish businesses – in July this year, the EU and Japan signed an Economic Partnership Agreement (EPA) in Tokyo. The agreement will ultimately create the world’s largest open trade deal, covering more than 600 million people and nearly a third of global gross domestic product (GDP).

Although that might scare some companies, markets like Australia, Hong Kong and Singapore can be “excellent” starting points, he adds, considering they’re more closely aligned to the west.

Seasoned exporter Harry Hughes recently used the agency to scope out opportunities in the Chinese market. Hughes, chief executive of Mayo-based workwear company Portwest, says Enterprise Ireland introduced his company to those who have exported to the Chinese market before who, in turn, gave advice on market conditions.

Hughes, who anticipates turnover for Portwest for 2018 to reach €205 million, says Enterprise Ireland is a “critical piece of infrastructure for the State”. “Any time you need them, they’re there,” he adds.

The fact that there are now direct flights to Asia alongside changing market conditions – in that beef access to China was secured this year – means that part of the world is becoming more attractive to a range of exporters.

And Irish companies have had success there of late. This year, Portwest acquired its second Australian company for €10 million. Dublin-based software vendor Openet signed a contract with Singaporean telecommunications company Singtel while ESB International signed a joint venture with Meralco Power Generation, a subsidiary of the largest electric distribution utility in the Philippines.

In North America, there’s been a 7 per cent increase in exports to the US and Canada to about €4 billion while 800 of Enterprise Ireland’s clients employ about 100,000 people. Aerogen, Fenergo and Rubicoin have all set up a base in North America in the past 24 months.

Irish companies are proving that market diversification is more straightforward than it can sometimes be perceived.

And while that’s all positive, in light of global challenges the importance of market diversification, according to Sinnamon, “has never been greater”.