How to ensure the best bash for your buck 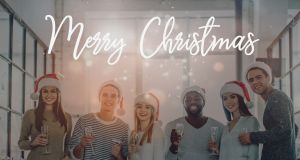 “Instagram plays a huge part of all parties now – it doesn’t happen if it’s not on Instagram. It’s all about the photos.” Photograph: iStock

The corporate Christmas party is back with a bang, so how can you ensure yours doesn’t go with a whimper?

Veteran party planning professional Caroline Gardiner of The Party Pros knows just what it takes and has huge admiration for the valiant staffers charged with organising the office ‘do’, the unsung heroes of the festive season.

“One of the biggest trends we are seeing now is the huge efforts people are making to provide something new and different. Everybody wants an element that is unique, and spend on Christmas parties has gone up as a result.”

In a tight labour market, businesses are keener than ever to support staff retention and engagement and a fun night out a Christmas is one of the most cost effective and fun ways to achieve it.

Shared corporate Christmas parties in a hotel or event venue can be a great way of adding additional festive buzz, particularly if you have a small staff complement.

But increasingly, Gardiner reckons the trend is towards throwing a party that is exclusively your own.

A great way to do that is to book a private dining room in a great restaurant or, if you have the numbers, take it over entirely.

If you’re opting for a function room or event space, some businesses are eschewing sit-down meals in favour of something a little less formal, she says. “In some cases, we are seeing companies opt for a Christmas market-type event, where you have stalls providing a range of different, almost street food-style offerings so that people have choice. We also offer supper bowls, a variety of foods served up in bite-sized dishes.”

Photo booths are hugely popular and a great way to add a fun element to any night. Everybody gets to go home with some souvenirs and most of all, they get to share them digitally.

Hot on its heels as a must-have party trend is the Selfie Mirror, a full-length mirror that lets guests capture their best side, with touch-screen technology that allows them put their own signature on pictures before, again, sharing them digitally.

Now, the big push is for fabulous backdrops for photos – which can be shared digitally.

“Instagram plays a huge part of all parties now – it doesn’t happen if it’s not on Instagram. It’s all about the photos. We provide a special Instaframe which groups of four or five people can get into to take their selfies,” says Gardiner.

Frames are branded with details of the event. Once pushed out on social media, it’s a nice way to get your corporate brand out there in a way that shows you as a fun place to work.

Whatever kind of Christmas party you opt for, put some thought into drinks. For a start, put away the bubbly, advises Gardiner. People don’t get too excited about the traditional glass of Prosecco on arrival anymore and “men don’t go for it at all”, she says. Much better to offer a Christmas cocktail that gets everyone into the festive spirit.

A particularly tasty option is a Christmas Cosmopolitan, she suggests, which includes cinnamon. A Christmas eggnog works well too.

Whatever the kind of libations you intend to offer, establish a clear drinks policy early on in the party planning stage.

Employers have a duty of care to employees, which extends to the Christmas party. “People are being really responsible these days. Instead of an open bar, they are working off a voucher system. Typically, people get a cocktail on arrival and three drinks vouchers.”

Guests are just as happy and things get a lot less messy. Your event isn’t awash with empty beer glasses stacked up on the bar. “With an open bar, you find pints all over the place, people don’t respect it. With a voucher system, you can control the bar a lot more,”

Make sure whatever venue you choose lays on enough non-alcoholic drinks too – you’ll be surprised at how often people choose them, Gardiner says. “People want to be seen to be drinking but when you make sure to provide something like Heineken 0.0, you’ll find it will always get drunk.”

Mocktails are another must-have. “A lot of the companies we deal with have really diverse teams in their staff, including for example Muslims and others who don’t want to drink.” Typically, the ratio of alcoholic drinks to non-alcoholic variants, including mocktails, is 60:40 at a party.

Being creative about your Christmas do can also refer to when you have it, Gardiner suggests. Given Ireland’s international workforce, many will be heading home to far-flung places during December, so might not be around for your party.

Often, people are simply busy, with other places to go and things do during the party season, which in itself can make it hard for yours to stand out.

“January is a really big time for us for Christmas parties and in fact we organise them every year right up until the middle of February. It very often just doesn’t suit people to have it in December.”

Not alone does it boost your chances of bagging that restaurant or venue you really wanted, it gives you more chance of getting it on a Friday or Saturday night too, the best nights of the week for a party.

At that stage, of course, you’ll be ditching the Christmas tree. “It becomes just a party – but one with lots of great entertainment,” Gardiner says. And because everybody is broke after Christmas, it’s a free night out in January and something to forward to.

Whenever you stage it, be creative with your themes. A few tired old Santa hats won’t fit the bill. “Circus is really big right now. We’ve done huge Charlie and the Chocolate Factory Christmas parties too. We did a Narnia one with snow too, where people walked through a wardrobe to get there.”

Whatever kind of Christmas party you opt for, make the most of it. “It’s the perfect time for the CEO to thank people for the year just gone and motivate them for the year ahead because everybody is in good form,” says Gardiner.

“It’s a real opportunity not to be missed. That’s what Christmas parties are all about, a chance to say thanks.”

What not to do

Don’t assume everyone will turn up. A key measure of success for any party organiser is making sure people actually go, says Gardiner. “It’s actually quite hard to get people to go to a Christmas party.”

Don’t reveal all. “Keep a surprise back. Often it will be something that only one person on the organising team knows about and keeps from the rest of the team. The Singing Diva Waiters are terrific, busy serving you all night before belting out Christmas or current songs. From there, you go straight into a DJ and everyone’s on a high. A surprise charges the atmosphere.”

Don’t end up paying for no-shows. “Know your numbers in advance. Don’t just blast out an email and expect people to turn up because you will just waste so much money if they don’t,” Gardiner says. Give them an additional incentive to go, such as a raffle prize. “And make your invites as exciting and mysterious as possible.”

Great spots in Dublin for your office Christmas party

How to ensure the best bash for your buck