Unleash the dogs of delivery

Brought to you by Dublin Chamber 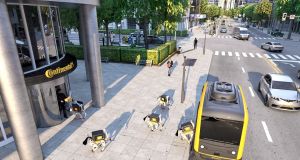 German technology giant Continental has presented a vision of the future that posits autonomous delivery vans that roam our cities and towns, stopping to unleash a pack of robotic, intelligent, delivery drones that bear more than a passing resemblance to Snoopy the dog.

Many of us by now assume our jobs are going to go the same way of hand-weavers. They were replaced by the water-powered loom, we will be replaced by either robots or autonomous cars. Or, if Continental is to be believed, a combination of both.

The German technology giant, best-known for its comfortingly analogue tyres, has presented a vision of the future that posits autonomous delivery vans that roam our cities and towns, stopping to unleash a pack of robotic, intelligent, delivery drones that bear more than a passing resemblance to Snoopy the dog (but not Snoop Dogg, which is a bit of a missed opportunity).

Continental says it is developing the Continental Urban Mobility Experience, or CUbE, which is basically a robot taxi. Thanks to the Amazon-led explosion of online shopping, and therefore parcel deliveries, the demand for “last-mile” delivery services (the gap between your house and the depot that the huge articulated truck, stuffed full of whatever it is you’ve bought from Jeff Bezos delivers to) is expected to outpace the demand for conventional passenger cars in the future. Right now, that last-mile stretch is covered by a plethora of courier firms, many of which have come under fire in recent years for their zero-hour employment policies.

Well, those policies may soon be irrelevant. In order to maximise delivery speed, eliminate the need for coffee breaks, and cut down on congestion, Continental’s idea is that the CUbE circulates around a given urban area, but instead of calling door-to-door itself, it pulls in at a geographically sensible point and unloads a group (pack? horde?) of dog-like robots that actually cover the final metres to your doorstep.

“With the help of robot delivery, Continental’s vision for seamless mobility can extend right to your doorstep. Our vision of cascaded robot delivery leverages a driverless vehicle to carry delivery robots, creating an efficient transport team,” says Ralph Lauxmann, head of systems and technology, chassis and safety division at Continental.

“Both are electrified, both are autonomous, and, in principle, both can be based on the same scalable technology portfolio. These connections create an exciting potential for holistic delivery concepts using similar solutions for different platforms. Beyond this technology foundation, it’s reasonable to expect a whole value chain to develop in this area. Industrialising the automation of goods delivery requires reliable, robust, high-performing and best-cost technology – a mix perfectly reflected in the automotive equivalent of automation. It is this very profile of expertise that has made Continental one of the industry-leading suppliers of advanced driver assistance systems and vehicle automation,” Lauxmann says.

“The challenges to a delivery robot parallel what we already solve for in automated vehicles,” says Jeremy McClain, director of systems and technology, Continental North America. “Plus, delivery robots will require technology that is just as advanced and robust as our automotive solutions. With the ever-increasing popularity of online shopping and the growth of megacities, unique solutions for package delivery will be needed. Driverless vehicles combined with delivery robots could be the perfect answer.

This is, potentially, huge business. PricewaterhouseCoopers (PwC) estimates that by 2030, the market for retail drone deliveries in the UK alone could be worth £7.7 billion. Amazon currently, at a conservative estimate, spends some $20 billion every year on delivery costs using human delivery drivers and the conventional postal system. UPS has estimated that chopping just one mile from the length of each of its delivery routes (something that autonomous delivery systems would be very, very good at doing) could save it $50 million a year.

An Post, and courier firm Pony Express have already experimented with airborne drone delivery in Ireland, but there remain big hurdles for such tech, not least the cost of investment and the intricacies of regulation.

Nevertheless, PwC also estimates that, while many are worried about a drone-triggered employment meltdown, the widespread use of such delivery systems could add 680,000 jobs to the UK economy. “There will be a need for new types of workers to think creatively about how drones can be developed and applied, and to build, maintain, operate, and regulate the devices and related technologies. Businesses that engage with drone technology can open up a range of exciting opportunities to upskill their existing staff,” says the PwC report. Mind you, the report later – slightly more sotto voce – says it expects drones and automation to have an “s-curve” effect on employment, meaning that it goes way down before it comes back up again.

As far as those employment worries go, the transport industry represents about 4.5 per cent of the total employment figures of the European Union, and of that more than one quarter are employed in road transport and haulage.

José Viegas, secretary-general of the ITF said that “driverless trucks could be a regular presence on many roads within the next 10 years. Self-driving trucks already operate in controlled environments like ports or mines. Trials on public roads are under way in many regions including the United States and the European Union. Manufacturers are investing heavily into automation, and many governments are actively reviewing their regulations. Preparing now for potential negative social impact of job losses will mitigate the risks in case a rapid transition occurs.”

Maybe some of those 680,000 new drone jobs will be teaching the robot delivery dogs how to write “We called but you were out” cards.