Tech a look at these beauties

Stuff you don’t need – but will definitely want this autumn 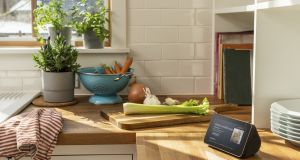 Take a look around your house. It’s probably stuffed with wall-to-wall tech. There isn’t a corner of any room that isn’t wired up or Bluetooth-enabled. Let’s face it, you’ve got tech coming out the wazoo, and it may be time to call in Marie Kondo to help clear out the electronic clutter. The last thing you need right now is to bring more gadgets into your already overstuffed gaff. Right?

Nonsense! There’s always room for more tech. You may not need any more gadgets, but there’s plenty of good stuff out there that you’ll definitely want. And if you find you can’t move for fear of stepping on a portable Wi-Fi hub, well, then you can always get a bigger house. Just make sure it’s a smart home.

Here are some new gadgets for autumn that you probably don’t need, but which will soon become irreplaceable – until the next batch of gadgets comes along.

Imagine being able to see Alexa. I don’t mean the face behind the voice (does she even have one?), I mean being able to ask Alexa to show you something, and it appearing on a small screen set up handily on your kitchen counter, office desk or bedroom side-table. The Amazon Echo Show is basically an Echo with a 10.1” HD screen, allowing Alexa to show you stuff as well as tell you stuff.

So, you can look at recipes, the weather forecast, your events calendar, watch the latest pop videos or viral sensations, and download the latest movies or watch your favourite streaming shows – all while cooking up dinner.

Make video calls to friends and family who have Skype or Alexa services, and set timers and alarms to make sure you don’t miss any appointments – or miss breakfast. The Show’s handy wedge shape means it can sit anywhere – on a shelf, table or bedside locker, and though you might be watching it, rest assured the Amazon Echo Show is not watching you.

You’ve probably already got so many headphones you could open your own DJ academy, but it’s worth making room in your head for Apple’s much-talked-about flagship AirPods, which definitely live up to their hype. They can be used with all your Apple devices – iPhone, iPad, Apple Watch and Mac, and set-up is a simple one-tap operation.

The AirPods are always on and ready to go, automatically powering up when you put them in your ears, and automatically knocking off when you take them out. They’re powered by Apple’s new HD1 chip, which delivers high-quality sound and a faster and more reliable Bluetooth connection. You can also talk to Siri using your AirPods, without having to even pick up your iPhone – very handy when you’re on the go. Did we mention they look cool too?

It’s been a year of ups and downs in the smartphone market. Sales have had a definite wobble, as consumers cautiously stick with their reliable models from last year, leading some to wonder if we’ve reached peak smartphone. Then there’s the uncertainty caused by the US ban on Huawei, after the Trump administration – which refused to believe Russia could possibly have interfered in the 2016 election – accused Huawei of being a tool of the Chinese government, claiming Huawei’s technology was being used to spy on the west. First, Huawei was banned from using Google updates, then the ban was temporarily lifted, but consumers are still none the wiser as to whether their Huawei device will be able to use Google Play or Gmail or a myriad other Google apps.

This autumn, the major players are bringing out their latest models, and tech-watchers are hoping the market hots up again after a very quiet year to date. Apple, Samsung, Huawei, Google and LG all have spanking new smartphones out this autumn, and though most tech reviewers are agreed that the Huawei P30 Mate is the best of the bunch – particularly its astonishing camera with Leica lens – that niggling uncertainty over the US ban is still there.

As a safe alternative, the new Samsung Galaxy Note 10 or 10+ could be the smart choice, able to handle your personal and business needs and cater to your grá for gaming. Samsung makes some bold claims about the Note 10, saying it’s like having a computer, gaming console and professional photographic studio in your pocket. The Note 10 has a large 6.3” screen, while the Note 10+ has an even larger 6.8” screen – and with a minimal bezel and just a small front camera aperture, it’s pretty much all screen. The whopping 512GB storage is expandable up to 1TB, so you can pack your entire life into your pocket. And the reliable battery power means your life doesn’t have to stop before the day ends.

In the galaxy of things you don’t need, turntables occupy a solar system all of their own. But, as every vinyl junkie knows, space is not a consideration when it comes to having the right audiophile equipment. No matter how small your pied à terre is, there’s always room for a good turntable, even if your family has to eat dinner off their laps. But as soon as you get the new Mag-Lev ML1 turntable, you’ll need a mansion to accommodate the hordes of people who will be dropping in just to gasp in awe.

The Mag-Lev is basically a levitating turntable – put your LP on, hit the switch and the platter magically floats in the air, spinning majestically a few inches off the body of the turntable as it blasts out the music at perfect speed. It’s all done by electromagnetics – there are no belts, gears or any other moving parts in the turntable. It’s the sort of stereo you’d expect Han Solo to have installed in the Millennium Falcon, but it doesn’t come cheap. But think of all the new friends who’ll be queuing up to marvel at this magnetic wonder.

Go on, be honest: you don’t really need hi-res audio blasting out of every room in the house, do you? Your regular, bog-standard res speaker system does the job quite adequately, so why would you bother upgrading? Answer: because better sound is always worth it, and the Bluesound multiroom speaker system has everything you need to turn your home into a pumping, thumping, gazumping music machine.

The Pulse Flex 2i wireless speakers can be customised for each room, while the Node 2i music streamer allows you to access hi-res streams from internet radio and cloud services, as well as from your own music collection. And putting the Pulse Soundbar 2i under the telly will give you the full cinematic sound experience – without the need to add a sub-woofer. I mean, let’s face it, a house is not a home until it’s fully wirelessed-up for sound. This set-up will turn your gaffe into a bricks-and-mortar boombox.