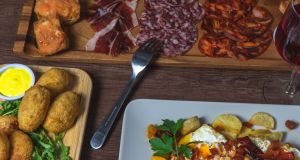 The gentrification of Pearse Street continues apace, or at least the hipsterisation. To the already hot mix of Trinity Science Gallery, Bread Nation and trendy workspace Huckletree, has now been added Paella Bar & Co. Situated at No 32, it offers its take on the classic Spanish staple, including traditional Valencian paella. Contrary to the hotel holidays of your youth, traditional paellas aren’t restricted to seafood but can include meat or chicken versions.

As befits a restaurant owned by real live Spaniards, all the flavours of home are showcased, with tapas dishes too, featuring croquetas, calamares fritos and chorizo a la sidra, with ingredients sourced from both Spain and local suppliers.

Prices are tasty, with paellas starting at €9 per person and tapas from €5 to €8.50. Don’t miss home-made sweet treats such as chewy churros and creamy crema Catalana as well as a range of fresh cakes, including a delicious whiskey-infused cheesecake.

There’s both wine and sangria if you fancy a festive tipple with your tapas and the venue is currently open for lunch seven days a week, and from December, Thursday, Friday and Saturday evenings too, making for both a Feliz Navidad and a Bon Nadal.

If you’re one of the frazzled few still trying to find a venue for the team’s Christmas party, check out CHQ. Stack A restaurant, which is based in the beautifully vaulted building, is a good option for everything from small, intimate get-togethers or larger parties of up to 300 guests. At the time of writing, it still had availability. Christmas menus run from November 26th to December 23rd for both lunch and dinner, with set dinners from €45, but for Santa’s sake, be quick.

Have a Blue Christmas

Ireland’s Blue Book, the marketing organisation behind some of the country’s swankiest hotels, has added two new ones to its stable, including The Wilder Townhouse on Adelaide Road, Dublin 2. If you’re staying over in the city after a Christmas night out, it’s one to bear in mind. Rooms start from €155 for a double, available online at time of writing. The gorgeous Victorian redbrick – built as a home for aging spinsters – has 42 rooms in total, including ones very honestly labelled ‘Shoeboxes’. It’s way too nice to just crash there after a do, mind you, as it has a lovely Gin and Tea bar, with private terrace.

The second new property in the Blue Book is Glin Castle in Co Limerick, owned by actor Dominic West – talk about a Christmas star. Incidentally, the newly elected chairperson of the Blue Book is Laura Bowe, whose own luxury establishment, Marlfield House in Gorey, is just an hour from the city centre when the traffic gods smile. It’s running its annual Christmas recital, with both lunch and dinner options, plus an opportunity to stay over, on December 15th.

If you’ve had it up to here with turkey and ham already, make for Maynooth. Kin Khao Thai has Michelin-trained chefs preparing authentic Isaan-style dishes, using local Irish ingredients. Owners Janya and Adam Lyons opened the original Kin Khao Thai in Athlone nearly two decades ago, specialising in the “regional, country style and humble” dishes that originate in north-eastern Thailand.

Isaan food features complex layering of bold ingredients such as hot chillies, lime, fermented fish and mint. The meats, often marinated, are prepared over an open char grill. Kin Khao Maynooth, which opened a year ago, is the only Thai restaurant in Ireland using a char grill imported from Thailand.

Go for the surroundings as much as the food. The interior is a homage to the ‘shop houses’ of Bangkok, where generations of families quite literally lived and worked on top of each other. Kin Khao Thai Maynooth is open six nights a week, closing on Tuesdays. Lunch is from noon on Thursdays, Fridays, and Sundays.

Yamamori North has re-opened for lunch service after nine months of closure due to renovations next door. Weekday lunch starts at just €9.95 and is served from 12-5pm, with dinner service from 5pm. The restaurant offers classic Japanese cuisine, with signature sushi rolls, bentos, ramen, grill, and small plates. The newest menu builds on the most loved essentials but diversifies with increased vegan and vegetarian options, unique aburi-style sushi, and fusion plates. Early Bird dinner specials run from 5-7pm, Monday through Friday.

Located at 38/39 Ormond Quay Lower, right beside the Ha’Penny Bridge, this restaurant is the northside member of the Yamamori family. Established in 2007 and located in two classic Georgian buildings, it features authentic 19th-century Japanese artwork and a high emphasis on good service and versatile spaces for groups of all sizes. It also houses the music spaces Tengu and Kaizen Bar at the back, and the newest late-night space The Whisky Bar – a take on the sophisticated cocktail bars of Tokyo – at the front of the building.