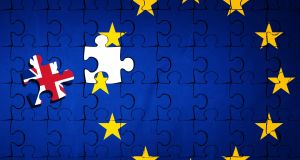 The fact that the UK is still largely waving through goods inwards, to give the system time to adapt, has helped.

Such support is more important than ever. “Selling in 2021 has become complex, when you combine a pandemic and add Brexit into the mix, it’s a real challenge driving sales,” she points out.

It isn’t just those selling into the UK that are being affected by Brexit, however. Those buying from, or through, Great Britain have had to get to grips with massive changes too, the full implications of which companies are only just coming to terms.

“There is no doubt about it, there are challenges there for a lot of companies as they adjust to life under the new rule book. Brexit is, after all, the most significant event to have taken place in 50 years of trade,” says Brian Daly, head of the Brexit Response Team at KPMG Ireland.

The choreography didn’t help either. Like bankruptcy, Brexit went slow, then fast.

“The lack of any implementation period hasn’t helped, in so far as the transition period was absorbed without us knowing what we were transitioning too,” he points out.

An 11th hour trade agreement on Christmas Eve didn’t stop customs and other non-trade barriers rising like trip wires on January first. “There has been no softening of the blow,” says Daly.

Not every business was as prepared as they might be. “To a degree that is understandable, as a result of the lack of clarity,” he says.

Business owners and management teams are busy people, with limited resources in terms of time, personnel and money. In the main, those that prepared are not identifiable by size or sector, but by how well resourced they were coming into Brexit, he points out.

It didn’t help too that, while the trade talks captured the headlines, non-tariff costs caused by the burden of bureaucracy were always going to be harder to quantify.

“These are not going away, so for businesses it’s a matter of getting used to them and considering who is going to bear these costs . . . will they be absorbed or passed on,” says Daly.

It isn’t all doom and gloom. “Those who are already further down the road in terms of their preparations are looking for opportunities. Business is all about finding ways to make money and the rule books that cover that activity is just something they have to adjust to. The sooner you can adjust to it, the better,” he says.

The fact that the UK is still largely waving through goods inwards, to give the system time to adapt, has helped. “It’s not that the paperwork isn’t going to be required at some stage, but there are waivers for six months,” he explains.

That fact, and stockpiling here in the run up to 1st January, has kept things in a state of limbo. “The reality of checks on the way into the UK hasn’t hit yet,” he says.

There are other drags on progress too, including a lack of customs expertise which will take time to generate. “We can’t produce them overnight,” he points out. Covid isn’t helping.

“But things will change, Brexit will evolve and certainty will return. The UK will continue to be a very major market for many Irish businesses,” says Daly.

Brexit was already on the way when VRAI, a creator of virtual reality training solutions for people who work in hazardous environments, from firefighters to nurses, was set up in 2017.

Chief executive Pat O’Connor took a strategic approach to its Brexit preparations, as befits a man who spent 20 years in the Defence Forces.

VRAI’s system uses artificial intelligence and machine learning, capturing up to 500,000 data points per minute of training, which can be used to tailor programmes that were previously only the domain of pilots and astronauts.

“We knew Brexit was happening, but we took a pragmatic approach to it, because we also knew we couldn’t predict the future,” explains O’Connor.

The first step was to set up a UK registered company, in 2019. “We decided that, after that, if we won a contract, we would open an office there, which we did, in Gateshead, when we won a contract with the Royal Airforce.”

The next step has been to recruit its first UK staff, all high calibre data and software engineers.

All in all the preparations VRAI has made for Brexit have opened the business up to new customers, new talent, and new investment, says O’Connor who believes, despite the uncertainty, that there is a silver lining to Brexit for Irish SMEs.

“All the Brexit readiness programmes and grants from Enterprise Ireland have helped Irish businesses like ours to improve our decision making and our contingency planning,” says O’Connor.

“It has helped us to build and expand our resilience and encouraged our management teams to find opportunities in turbulence. It’s very hard to do that, without turbulence.”

Step-by-step guide to taking the complexity out of customs

Customs clearance made easy with Declaron

Brexit: The disappearance of Percy Pig is a feature, not a bug

Brexit support: Where can companies go for help?

VRAI: Irish simulation company dealing with the reality of Brexit

Brexit: Irish consumers will have to pay extra for some goods or go without

Brexit has made InterTrade Ireland even more important