‘We used to talk a lot about managing. Now we talk about leadership’

In association with Great Place to Work 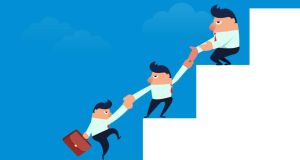 GPTW: trust is earned. Good employers know the value of this. Photograph: iStock

Trust is earned. Good employers know the value of this. Both the Woodie’s DIY chain and Avantcard consumer credit company understand this and have worked hard to earn it from their staff. Securing it has paid substantial dividends.

“We’ve been working on engagement and trust with our colleagues in business since 2014,” says Declan Ronayne, CEO of Woodie’s, who had joined the company at the time.
“In the Great Place to Work survey there are two key scores to look for in this respect. In 2014, our overall trust score from colleagues was 50 per cent. In 2017, that figure was 79 per cent. The second key score is where staff were asked whether or not their company is a great place to work. In 2014 our score was 37 per cent. Now it is 77 per cent.”

To this end Ronayne instituted a series of measures designed to inspire and empower its 1,400 employees.

Stating values is meaningless if they are not also demonstrated

Woodie’s supports three core pillars: customers, efficiency and the phrase: “we value our colleagues”.
“Those three pillars were introduced when I came in. You can’t fake that stuff. When you make a statement like that you have to live up to it or people will become cynical.”

On top of those pillars he introduced six values: homely and real, expert, helpful, enthusiastic, inspiring and great value for money.

Pointing out that values are hugely important, he says that “they provide the glue that binds the culture of the organisation.”
But stating values is meaningless if they are not also demonstrated. “The first thing we did was put a leadership development programme in place, from the top down starting with me and throughout every management level – and we’ve 250 managers.”

Each of these managers goes through the leadership development programme. “At Woodie’s we used to talk a lot about managing. Now we talk about leadership. It’s the difference between controlling and inspiring.”

The organisation has introduced a bottom up skills development programme too, covering seven modules – starting with customer service. Graduation ceremonies take place at a Dublin hotel, in a hugely celebratory atmosphere. A spring trade show event has also been instituted, with staff from around the country meeting the 25 suppliers to find out about forthcoming trends in DIY. “It’s all about building a confident organisation. When you’re confident, everybody’s shoulders go back and customers feel it.”

Recognition is a key part of this. Staff have an app, similar to an internal Facebook page, on which they can post tips and messages of thanks to colleagues.

Good communication is key. Each year starts with a communications day for the senior team, who go on the road in spring time and at Christmas to make presentations in every store.

It introduced a charity fundraising event called Woodie’s Heroes, which culminates with two teams of cyclists riding to every store in the country to collect monies raised, typically covering 800km each across 35 stores in five days.

“The pride our people have in our stores has grown because of it,” he says. The company has instituted sustainability and wellness programmes as well as a bonus scheme. On Valentine’s Day it takes out advertisements in newspapers to thank staff and asking customers who have received good service to let them know. The positive feedback is captured, collated and published in a booklet for staff in each store to enjoy.

“If people think highly of themselves the performance you’ll get for your organisation is amazing,” says Ronayne. “If you don’t invest in your people, you’re missing a trick. To me it’s a no-brainer.”

Having been through a period of change, the senior team was determined to embed best people practices into its culture

Consumer finance business Avantcard has been on a similar journey. The company provides credit cards and personal loans, employing more than 220 people in its main office in Carrick -on-Shannon, Co Leitrim, along with its smaller office in Dublin.

Having been through a period of change, the senior team was determined to embed best people practices into its culture and committed to using the Great Place to Work framework to support its busines growth.

In 2017, it it undertook its first ever GPTW survey and its trust score among staff was 57 per cent. Just a year later it had increased that figure to 73 per cent.

This result was achieved in a number of ways. A three-pronged approach addressing the biggest areas requiring improvement were used; those areas were the senior leadership team; human resources; and “culture-vators”, the company’s internal engagement team.

The senior leadership team looked after management and leadership, communications and involvement. Human resources focused on reward and pay, performance management and career development. Its team of culture-vators worked on staff recognition, engagement and wellbeing.

Among the practical steps taken were improved communication channels which worked to eradicate intra-organisational silos. Investment in people was evidenced through an “earn while you learn” initiative. A senior leadership team rotation programme brought line managers up and into the top team for a three month stint. Long service awards were introduced, and successes, including the fifth anniversary of the Avantcard brand, were celebrated.

Wellness programmes have included a staff couch-to-5km fitness programme which, when achieved, many staff continued with.
“Building trust levels must be front of mind in everything we do and every decision we make,” says Chris Paul, Avantcard’s managing director. “Trust must be part of our DNA. A culture where trust permeates throughout the organisation is an unstoppable force.”

Back in 2017, when employees were asked if they believed their organistion would act on the results of the GPTW survey, only 51 per cent did. By 2018 that figure had risen to 79 per cent. Part of the reason for the low score was that staff had been through a lot of change, having started out as MBNA, a company that subsequently withdraw from Ireland. Staff had been servicing a declining market for a number of years thereafter, which is always a demotivator.

It had two more owners until five years ago when it became Avantcard. The business is now back on a growth path, aided, no doubt, by strong staff engagement.

GPTW provided the company with a framework through which it addressed the trust issues it had experienced. “It has been transformational,” says HR executive Helen Richardson. “The key has been to be transparent, showing what we are doing why we are doing it. It has helped create a united workforce.”

It has also facilitated the business’s growth. Avantcard re-entered the market in 2017, selling credit cards and loans both under its own brand and with partners such as Chill. “Our ambition is to be Ireland’s leading consumer finance provider,” says Richardson.

Forget the beanbags: What makes a Great Place to Work?

‘We used to talk a lot about managing. Now we talk about leadership’

How celebrating employees’ talents has long-term benefits for companies

Being a great leader takes many qualities, but high on that list is trust

‘If you leave Brexit aside, I can’t help but admire Theresa May’

What are the best workplaces for women in Ireland?

Diversity and inclusion are important but how do I bring them into the workforce?