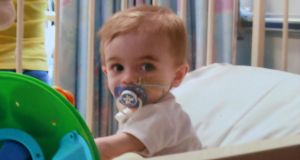 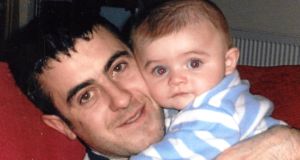 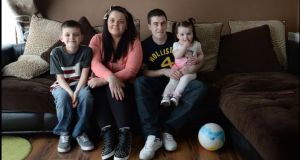 The irony of it all is that , after losing their son to medical errors and mismanagement, and enduring sub-standard treatment as his relatives, Kate Costello and Eric Hunter are health workers.

Costello is a home help, currently doing a course in healthcare studies. Hunter is a health worker for a commercial nursing agency, working 12-hour shifts. As far back as she can remember, Kate Costello had always wanted to be a nurse.

On Tuesday, April 23rd last Costello and Hunter were in the High Court, ready to enter battle against Children’s University Hospital, Temple Street, over the death of their little son, Kaiden.

The court case was another traumatic experience for the young couple, who are both 27.

“Why was I the one going into the witness box?” asks Costello. “My child died. Yet there was not one doctor in the court. Not one person from the HSE.”

In the event Temple Street admitted liability just before the case was due to start. It also issued an apology for the death of Kaiden Costello, aged 10 months. Kate Costello was awarded €180,000 – €35,000 for the wrongful death of Kaiden and €145,000 for the nervous shock it caused her.

They both think they would have been treated differently if they themselves, both 23 at the time of their son’s death, had been in some way different.

Kaiden was born on September 1st, 2008, in the Rotunda hospital, by planned Caesarean section. He weighed 6lbs 13 and a half ounces. He was a happy baby.

“Not a bother on him,” says Hunter, whose first child was Kaiden. “He never cried, even when he was sick.”

Kaiden was Costello’s second child. She had had her first son, Jake, when she was 17. At 23 she was an experienced parent. “Jake had colic so I couldn’t believe my luck with Kaiden,” she says.

In April 2009, at the age of seven and a half months, Kaiden caught what Costello and Hunter thought was a bug, and went down with vomiting and diarrhoea. “He started losing the weight very quickly and we brought him into hospital,” says Costello.

She remembers that on that occasion, April 12th, 2009, Temple Street hospital told her they were “not overly concerned because he was still taking the bottle”.

But four days later, April 16th, Costello and Hunter brought Kaiden back because he had projectile vomiting and had lost a kilo in four days. Kaiden was refusing to be spoon fed and was admitted for observation. Within a week he had had a nasogastric tube inserted. “It wasn’t nice to see,” says Hunter. “We couldn’t look when they were putting it down.”

Kaiden was under the care of Dr Sinead Murphy, a consultant paediatrician with an interest in food and nutrition. Tests were run on Kaiden.

Within two or three weeks, “Dr Murphy sat us down and said was there anything we could think of that would explain Kaiden’s failure to thrive,” says Costello. She and Hunter racked their brains. “Once we’d given him a lumpy yoghurt and he vomited real bad.” But that was all they could think of.

Kaiden was given a diagnosis of Non Organic Failure To Thrive, with its strong implications of psychological or environmental reasons for a child not growing as it should. Thus began a dreadful time during which, as Hunter puts it, “We were torturing the child with food.”

Kaiden was put on a strict feeding regime, all the time as an in-patient at the hospital. “It is horrible as a parent, to sit down, pull the curtains across and torture the child with food,” says Hunter.

They both noted that Kaiden would not eat for hospital staff either. As Hunter points out “He’d suck on toast, he loved the taste, but he had no hunger.”

The stress Costello and Hunter felt at this time was enormous. “Our relationship fell apart. There were people watching us feeding our child.”

They both felt they were under suspicion of being negligent parents. They accept that staff at Temple Street must see parents who are neglectful. “But all this time they never mentioned that I’d a perfectly healthy six-year-old child at home,” says Kate Costello.

Costello took Kaiden home on June 10th, now lighter than he had been when he’d been admitted to hospital. She refers to the notes sent home with her, detailing strict instructions for the constitution and delivery of Kaiden’s food.

Even though Costello still has the diary of all the food Kaiden took during that fortnight at home – and he was consuming more in his home environment than he had been in hospital – he was still losing weight. He was taking five naps per day and his mother was increasingly worried. “I brought him to A&E at Temple Street. He was sleeping too much.”

On June 24th there was another meeting with Dr Murphy “And I flipped,” says Costello. It was decided that the next day Kaiden would go over to Our Lady’s Children’s Hospital, Crumlin, to be seen by “a special feeding team”. Crumlin hospital suggested that Kaiden have an MRI scan before he arrived.

and Hunter: “We had suggested an MRI scan before. We couldn’t understand why they didn’t give him one in Temple Street. We said ‘Is money a problem? Because we’ll get the money for it.’”

According to Costello and Hunter, the doctor had told them that an MRI scan for Kaiden was not necessary.

As soon as Kaiden went down for the MRI scan, on June 25th, after the request from Crumlin hospital, Costello knew that something had been found: “He went down at six or seven in the morning. He was gone a long, long time.”

Photos of Kaiden on the day of the scan show a malnourished child, whose skin is bagging at the knees.

The nasogastric tube fed him every four hours, seemingly to no avail.

“He was 10 months,” remembers Costello. “But he was in size two nappies, and the only reason he was in them was because I refused to put a newborn nappy on him.”

At the time Kaiden went down for the MRI scan, according to Costello, staff in the hospital were still being difficult with herself and Hunter. However, they say individual staff, such as the chaplin at Temple Street, were very nice to them. “We were there all the time. I slept there, in a chair. I always had beautiful clothes on him. There was no reason for [anyone] to think that of me.”


Shocking results
When the results of the MRI scan came back, says Costello, “I could see in their faces they were shocked as well. ”

In a meeting with two medics, one of whom was the neurosurgeon Dr M Sattar, and two social workers, Costello and Hunter were told, “A tumour in a baby was very, very rare,” says Hunter. This is true.

Prof Richard Hayward, paediatric neurosurgeon at Great Ormond Street Hospital in London, in a report for

Costello and Hunter’s lawyers, later wrote that there are only 400 cases diagnosed in the UK each year.

But his report adds: “Diencephalic syndrome is a rare but well-recognised mode of presentation of a chiasm/ hypothalamic astrocytomoa occurring in a young child (almost invariably under one year of age.)”

Prof Hayward goes on to say that, because of their position in the brain, such tumours are “surgically incurable” and that chemotherapy is the preferred option “as it can reverse the striking problems associated with diecephalic syndrome”.

At Temple Street, Costello and Hunter say, “We were never told about chemotherapy or any alternative treatment for a brain tumour.”

The talk was only of performing surgery on Kaiden, and perhaps chemotherapy afterwards.

Then there was a question over how soon the operation could be done. For logistical reasons, including the fact that, amongst other things, a paediatric anaesthetist was not available, a fortnight elapsed between diagnosis on the MRI scan and the surgery on Kaiden. They say the tension and stress was not helped by the medical staff.

Costello remembers: “They said to me when he was getting his eyes tested, ‘We’re surprised he hasn’t gone blind.’ That freaked me out. We were like ‘Omigod’.”

There was talk of taking Kaiden to Great Ormond Street Hospital (GOSH) in London. “That’s my biggest regret, that we didn’t take him to England, ” says Costello now. There was still no date set for the operation, which was to consist of a biopsy, “to see what type of tumour it was, the surgeon said”, and a surgical de-bulking of the tumour.

The family was growing increasingly frantic and it was in this atmosphere of panic and fear that the date for the operation was set.

equipment and go ahead tomorrow.’ People told us Dr Sattar was the best.”

Kaiden was operated on on Wednesday July 8th. Afterwards, in intensive care, they went to see him.

“He recognised our voices and we didn’t want to stress him out, so we left. The ICU nurse was real nice.”

But they were called back in less than an hour. Kaiden had had a bleed in his brain.

“For the next couple of days every minute I knew he was going to go. His head was starting to swell,” says Kate. All the tubes and needles were removed from Kaiden’s body.

“I held him until his heart stopped beating. And a lot longer than that. Then we brought him to the chapel in the hospital.”

“I was really bad for a while,” she says. At one point she was hospitalised.

Request for file
But Kate’s problems with Temple Street were not yet over.

“In September 2009 I requested his file and it took ages to get it. I had to keep on phoning them on it. I was so angry. It was after Christmas when I got it.”

Costello and Hunter now have a new daughter, Lily Mae. “They call them rainbow babies,” Costello says. “The ones born after another baby dies.”

Their experience with Kaiden has left them with not only grief, regret and guilt, but also with a working knowledge of how to treat both Diencephalic syndrome and the hypothalamic pilocytic astrocytomas.

They have learned that, in these cases, it would be “exceptional for GOSH to recommend a biopsy, and never de-bulking surgery”, according to Prof Hayward’s report.

They’ve also learned that there was a doctor with a working knowledge of Diencephalic syndrome in Dublin at that time.

Similarly, they still don’t understand why the suggestion of taking Kaiden to the UK wasn’t followed up. Costello wonders: “Was it a problem with money? Or was it shame?”

As medico-legal expert and general surgeon Rodney Peyton, who also reported to the Costello legal team, puts it, “No one gets up in the morning to do harm.”

According to Costello: “There was no multidisciplinary team involved and it needs a lot of thought. You need to get a team together.”

Regrets
And, amidst all the catastrophe, they have one perhaps peculiarly parental regret. Of children with Diencephalic syndrome, 80 per cent of them live till they are five.

Kate Costello no longer wants to be a nurse.