World View: Is the EU turning into a federal superstate like the US? 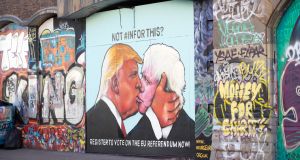 The destiny of the European Union looms large in Britain’s debate about its future in the organisation. Is the EU developing into a federal superstate along the lines of the United States? Or is it more likely to disintegrate or collapse in failure as did earlier efforts to unite the continent?

Ireland is more exposed to these arguments than other EU members, however different our own experience and attitudes are from those of the British. In particular, the federal bogeyman looms large in Irish, as in British, sovereigntist objections to the European project.

As depicted by Boris Johnson and Michael Gove, it will see the EU, through its core euro zone, assuming the powers of a sovereign state to decide budgets and supersede national decisions through a unitary political identity similar to those forged by its member-states in modern times. All the more reason for those who value national democracy to reject such a destiny.

Johnson’s vision has been denounced more for its false analogies with Hitler and Napoleon on European unity than for its unrealistic forecasting of a federal future. But that lack of realism is a more telling analytical critique of the Eurosceptic case.

Federalism is best defined as a combination of self-rule and shared rule. In the EU, this is expressed in the balance between the European Council, representing national leaders and ministers, the European Commission, and the European Parliament, expressing a general shared interest and the use of qualified majority voting to match states and populations. The European Central Bank (ECB) straddles the EU’s 28 members and the 19 in the euro zone.

The financial and euro zone crises since 2008 have shifted relative power back towards national leaders. In the euro zone, they work with the ECB and commission to implement strict new rules on budgets and spending which reflect more the intergovernmental power structure dominated by Germany than the shared rule of federal theory.

Germany resists the common budgets and transfer mechanisms that distribute resources in federal states for fear of becoming the paymaster of an EU now clearly more unequal.

This system is not on the brink of becoming a federal superstate. It has neither the will, democratic legitimacy nor material resources for that. The other side of Eurosceptic rhetoric depicting potential disintegration through multiple and reinforcing crises of austerity, the euro, migration, security, Brexit and right-wing populist nationalism is arguably more accurate.

Any convincing analysis of regional integration must be able to explain disintegration too. In a compound system such as the EU, combining national self-rule with shared European rule, federal methods of decision-making should be distinguished from the end goal of a federal state. One does not necessarily lead to the other. Such a limited but functional federalism to manage multinational interdependence in Europe is qualitatively different from the much deeper sharing typical of most national states, whether federal or unitary. To confuse the two is a category mistake.

The annual EU budget is less than 1 per cent of economic turnover, compared with the usual 35 to 50 per cent in its member-states. Increasing that EU budget fourfold would help create mechanisms for investment, common bonds, debt write-offs and the supplementary social and regional transfers needed for legitimate economic decisions at European level. Such a capacity would match the expectations of most citizens much better than the current prioritisation of market competition. Their political identities entangle the national and European dimensions of interdependence in a post-sovereign, rather than post-national, fashion. They are disillusioned with political elites who have lost the legitimacy to represent their preferences effectively.

This competitive or neoliberal market globalisation has created sociological winners and losers throughout the EU before and during these crises. Those left behind include many industrial working-class communities now tempted to vote for right-wing populists in protest against the hollowing out of employment opportunities and protective national welfare states. Traditional social democratic parties lose their appeal and are bereft of ideas on how to reactivate the European social model which attracted them to deeper integration in the late 1980s and 1990s.

Critiques of existing integration policies from more radical left and green voices are developed in opposition to the sceptical exclusionary sovereignty resurrected by the Le Pens, Farages, Wilders, Hofers, Orbans or Petrys of contemporary European politics. Centre-right and liberal parties muddle through but are unable to muster the will to the resolve crises effectively. For that to happen, more material capacity is required at European level.