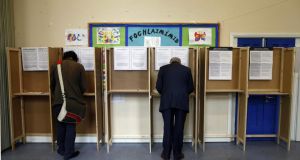 ‘Government should do right by our citizens abroad and commit to holding a referendum.’ Photograph: Peter Muhly/AFP/Getty Images

Over the next few weeks, many Irish emigrants will be returning home. Flights are already being booked, reunions planned. It’s the same every year – RTÉ will show footage of planes landing in Dublin airport, of happy families reunited in Arrivals for Christmas.

By the time all this happens, our Government will have made a decision on whether such Irish citizens abroad can vote in Irish elections. It’s an unusual decision to have to make – in most democracies, being a citizen means having a say; a representative. In over 120 countries and counting, systems have been established to include citizens in a fair manner as they leave and return. In Ireland, we’re still coming to terms with the fact that so many of our citizens are mobile – despite a long history of economically-driven emigration.

This decision is to be issued in response to a recommendation made over a year ago by the Constitutional Convention; a representative sample of Irish citizens and politicians convened to debate specific issues. Last September, 78 per cent of the Constitution’s members voted in favour of allowing Irish citizens abroad to vote in presidential elections, and urged government to put the question to a public referendum. This figure tallies almost exactly with UCC’s research in 2013, which found that 79 per cent of resident citizens were in favour of the change. Such a high level of domestic support is perhaps unsurprising given the number of Irish families affected by emigration and the fact that many emigrants are away on a provisional basis – with short-term visas and shorter-term contracts.

The Oireachtas resolution establishing the Constitutional Convention outlined a four-month deadline for a Government response to its recommendations. Over a year later, this response has yet to be delivered. In Dáil Éireann last month Enda Kenny apologised for the delay, and Minister of State with special responsibility for the Diaspora Jimmy Deenihan – who himself “very much supports” holding the proposed referendum next year – confirmed that Cabinet will make its decision by December 18th.

Government should do right by our citizens abroad and commit to holding a referendum. Since 2008, a quarter of a million Irish citizens have emigrated – over 70 per cent were in their 20s at the time of their departure. These people are young, engaged, and remain invested in Ireland. Research shows that they return home often, follow national news, and are in continuous contact with friends and family. For many, an improving economy can signal the end of Christmases bookended by flights or Skype calls: over the past six years, upwards of 100,000 expats have returned.

This rate of return mirrors a trend last seen after the exodus of the 1980s, when many of those who had left in search of work began to come back. It was during this period that our citizens’ right to representation while abroad was last seriously debated – and our current president, taoiseach, and several members of Cabinet voted for a 1991 Labour Party Bill that would have extended the franchise for a period of 15 years after departure.

Ultimately, hesitancy and indecision saw that can kicked down the road through a series of reviews and reports. Today, however, a growing consensus has become clear. Over the past year, this issue has received support from an assembly of our own citizens, the first ever Minister for the Diaspora, a cross-party Dáil committee, and the European Commission. It is current party policy for Fianna Fáil and Sinn Féin, and was for Fine Gael and Labour while in opposition. UCC’s research found that 85 per cent of recent emigrants want the right to vote in Presidential elections, and the majority of those back home stand with them. We have been debating this democratic deficit for almost a quarter of a century – it’s time to finally do something about it.

By any measure, this would constitute only a moderate electoral reform. Though most democracies around the world have established systems to allow citizens abroad to vote in law-making, parliamentary elections, the Constitutional Convention considered only whether the Irish abroad should vote for our President. The current Government set this limited scope, and though it represents only a small change, it would nevertheless be a significant one. It would be the first step towards fully integrating our citizens abroad in the Irish democratic process – to affording them a directly elected representative and a voice.

During those debates in the early 1990s, Enda Kenny condemned the then Fianna Fáil government for “allowing people in the hidden Ireland to emigrate” and demanded “a system whereby such people can exercise the democratic right they are supposed to have under a Constitution which is supposed to cherish all the children of the nation equally”.

As Cabinet debates that Constitution over the next two weeks, it is important that he is reminded of his words.

David Burns and Conor O’Neill are the founding members of We’re Coming Back, a campaign advocating emigrant voting rights.