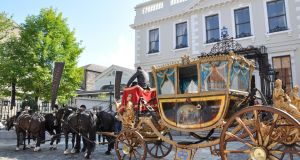 The coach of the lord mayor of Dublin. Photograph: Courtesy of Dublin City Council

The coach of the lord mayor of Dublin, although rarely seen in public, is a veritable art gallery on wheels, a magnificent example of craftsmanship in late-18th-century Dublin. Fortunately, it’s in an excellent state of preservation.

Dublin has had a mayor since 1229, although it took until 1665 for the title to be changed to lord mayor. But the lord mayors didn’t have transport of their own; they had to walk well behind the carriages of the wealthy aristocracy.

But in 1732, when the wealthy Humphrey French became lord mayor, he provided his own coach, which was pulled by six horses and was accompanied by several elaborately dressed footmen. When his term of office ended, he took his coach with him.

Then, for the next 20 years, the Duke of Leinster provided a coach for the lord mayor, but it was eventually decided to scrap it because repairs were becoming too costly.

What sparked off the eventual decision for the lord mayor to have his own elaborate coach was the decision in 1790 by Lord Clare, the lord chancellor, to upstage everyone with a very expensive new coach, built in London, which he put on display behind his house in Ely Place, Dublin.

Dublin Corporation was incensed that it had been slighted by the lord chancellor. It had already been decided to build a brand new coach for the lord mayor but after Lord Clare’s actions, the corporation decided to revise the design of its planned new coach to ensure it matched that of Lord Clare in elegance and design.

The new coach was built by William Whitton, one of several coach builders in Dominick Street. At the time, Dublin had around 40 coach building factories, employing nearly 2,000 workers.

This new coach for the lord mayor was intricately decorated, with incredible paintings and carvings. Many skills were involved in its construction, including those of upholsterers, harness makers, carvers, gilders and iron workers. The completed coach was just over seven metres long, nearly 2.5 metres wide and about 3.5 metres high.

The new coach made its first public appearance on November 4, 1791, drawn by six black horses. That year was also notable in Dublin for other events, such as the creation of the Malton prints and the founding of Jameson’s and Power’s distilleries.

William Whitton, the coach’s builder, died in November, 1792, before he had been paid for his work; the corporation subsequently reimbursed his widow, Eleanor.

After the founding of the Irish State in 1922, the mayoral coach was put into storage, at Hutton’s coachbuilding works in Summerhill and also at the National Museum. After the 1932 Eucharistic Congress, it languished in storage for just over 40 years more, first at Thomas Street fire station, then at the Royal Hospital in Kilmainham, deteriorating all the time.

Then in 1974, Dublin Corporation decided to restore it. The work was done at the corporation’s then-mechanical division’s workshop in Stanley Street, Stoneybatter (the place is now a garage for the fire brigade). Among the 10 people brought in to work on the coach were a coach trimmer from the railway works in Inchicore and art conservators from the National Gallery and the National Museum.

They brought the coach back to the pristine condition it had been in when it was first built . The first public appearance of the restored coach was at the St Patrick’s Day parade in Dublin in 1976.

The coach has remained in immaculate condition ever since. It makes occasional public appearances and is stored in a very secure, temperature-controlled facility. with continuous CCTV monitoring, in Dublin 4.

Ironically, the Irish State Coach, which is still used for ceremonial occasions in London, was built in Dublin in 1851 for Queen Victoria.

The lord chancellor’s coach was also restored and put on display at Newbridge House, Donabate.

One day not so long ago, I was walking along Pembroke Road when I saw the lord mayor’s coach drawn by its magnificently groomed team of black horses, emerging from the Spring Show at the RDS. The coach, in all its magnificence, travelled past me at little more than walking pace, giving me a good chance to look at all the paintings and gilded carvings that embellish its exterior.

Inside the coach was a young man, engrossed in conversation on his mobile.

I almost burst out laughing at the sheer incongruity of the situation.