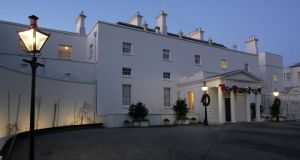 ‘It’s not as if we don’t already have a great many barriers for anyone seeking to run for the Áras.’ Photograph: Frank Miller/The Irish Times

Lowering the age of eligibility for the office of the President would remove an antiquated piece of our constitutional architecture, bolster our Constitution’s republican values, and send a powerful message about how young people are valued in our political culture.

Recently, the Labour Party announced it was not taking a position on the presidential age referendum. The latest polls suggest a steep hill to climb for its supporters.

Much of the opposition seems to come from fears of some type of preternatural youth prodigy – a political Justin Bieber who would sweep into the presidency and embarrass us all. How quickly we forget that the country was failed worst by its most distinguished elder statesmen – paunchy, grey-haired and homogenous as they were. The embarrassments may have been relatively minor but their mistakes were profound and painful.

It’s not as if we don’t already have a great many barriers for anyone seeking to run for the Áras. A candidate would need to convince a major political party to give him or her its backing or, more remarkably, persuade a large number of local authorities or TDs to support their nomination. Despite his high profile, public popularity and political experience, Senator David Norris almost failed to secure this support.

Throughout history, many barriers – from property ownership to gender – have limited the franchise to chosen groups, and we have fought to dismantle them. The right to stand for election is just as sacred as the right to cast a vote. Indeed, these two rights must stand alongside one another.

The presidential age barrier is arbitrary, meaningless and offensive to the idea of a republic.

In a republic, citizens should be held equal unless there is some compelling case to draw a distinction between them. Nowhere is this more important than in eligibility for the public life of the State, where our common values are aired and considered, and our common life shaped.

We should be slow to impose limits on eligibility for our presidency: as many citizens as possible should be able to stand before the people and ask for their support, to persuade their countrymen and women that they should be first citizen, and represent the views and values of our people.

This proposal was one of many worthwhile suggestions made by the independent Constitutional Convention. This, and marriage equality, are the only suggestions of that body the Government is brave enough to put forward.

Rejection will simply maintain an indefensible anachronism in our Constitution and make a negative statement about the trust we have in our young people. It will say, only, that our first citizen must not be like them.

When he ran for President, questions about Michael D Higgins’s age and fitness were roundly condemned as ageist. Mr Higgins himself deemed these questions “crude”. His performance in the role since then has confirmed his fitness and ability. Meanwhile, headlines have described this proposal as the “baby president” referendum. Ageism isn’t confined to the old.

It’s almost hackneyed to hark back to the leaders of the Rising, many of whom were below the age of 35.

We’re very happy for our technologists, artists and entrepreneurs to create, build and challenge tradition without having “served their time”. Yet we demand that the agents of social change – our political representatives – should soberly do just that. Somehow we are surprised by the slow pace of change.

Perhaps more than any to date, the marriage equality referendum will stand or fall on the disposition of young voters. At the same time as that vote is taking place, it seems likely that a proposal to abolish another needless distinction, and recognise the potential for young people to shape our public life, is set to be rejected.

If this referendum was about whether a president should be old or young, most would fairly favour the experience of age over the vitality of youth. We know the rare qualities we would demand in our head of State. It’s also true that for many years we have been well-served by our presidents.

But this is not a referendum on whether our president should be young or old, male or female, black or white, straight or gay. This referendum is about who’s entitled to put themselves before the people. Amid all the barriers and controls that exist for a nomination, and with the great wisdom of a popular vote of the people as the ultimate arbiter, why shouldn’t someone younger than 35 be able to try?

Whether symbolically, for fairness or just to give voters more choice, this lost generation and those that follow it should have the right to stand.

Dan Hayden teaches at UCD’s Innovation Academy (Twitter: @danjhayden). David Kenny is assistant professor in law at TCD (Twitter: @davidkenny311). Neither of them wants to run for President.

1 The real Contagion virus is out there and it’s causing virologists to worry
2 Man found guilty of murdering girlfriend during drinking session
3 First full moon on Halloween night since 1955 will be rare ‘blue moon’
4 Majority of Irish Covid-19 cases come from variant that originated in Spain – study
5 Medical gaslighting: The women not listened to or viewed as overdramatising or catastrophising
Real news has value SUBSCRIBE