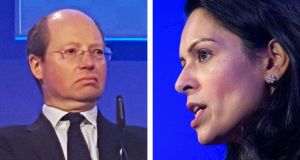 The resignation of the permanent secretary at the British Home Office, Philip Rutnam, following an unprecedented row with his political boss, Priti Patel, highlights the nature and importance of the relationship between ministers and their civil servants.

It is a pleasing irony that the relationship between ministers and their officials in Ireland is in a much healthier state than in the UK from which we inherited our civil service system a century ago.

We have not witnessed in the Republic the fierce public criticism of the type that some British politicians directed towards Ollie Robbins, a civil servant publicly pilloried for carrying out the Brexit instructions of his prime minister; or the serial undermining of public officials including Britain’s ambassador to the EU, Ivan Rogers, and its ambassador in Washington, Kim Darroch.

If Sinn Féin were to form part of a coalition government in the Republic at some point, it would, as is its right, challenge some traditional orthodoxies

The basic problem that some current Conservative politicians have with civil servants is that their own fantasy of a successful Brexit can only thrive in an intellectual void in which all expertise is dismissed. They cannot stomach being presented with any reality, including the objective advice which it is the duty of civil servants to bring to the table, that contradicts their own science fiction.

If Sinn Féin were to form part of a coalition government in the Republic at some point, it would, as is its right, challenge some traditional orthodoxies. The recent comments of Garda Commissioner Drew Harris are a reminder that in certain specific areas, notably relating to the Department of Justice, there are highly sensitive issues which would need to be addressed in the negotiation of any coalition, either in the allocation of ministerial portfolios or otherwise.

However, those crucial issues apart, I believe that, after an inevitable bedding-down process, there is a good prospect that Sinn Féin ministers and civil servants would work reasonably well together.

The Irish civil service absolutely respects the democratic process as reflected in elections and in the decisions of the Oireachtas. It would work loyally under the direction of any government, however radical. How individual civil servants vote has no bearing on the commitment, experience and honest advice they place at the service of every minister. They rarely know the political affiliations of even their closest colleagues.

My recollection is that, when the Democratic Left entered government in 1994, the supportiveness and openness of the civil service was matched by the respect and attentiveness of the new ministers. Relationships settled quickly into a professional mode.

I have no inside knowledge, from the other perspective, of how Sinn Féin perceives the civil service. However, two things lead me to believe that it would be open to working constructively with departments.

Firstly, Sinn Féin has not made public attacks on civil servants such as the broadsides we have recently witnessed in the UK.

Secondly, Sinn Féin has not indulged in the explicit dismissal of expertise which created the analytical wasteland in which Brexit became possible. Certainly, there are many who disagree strongly, as I do, with Sinn Féin’s past and many of the proposals in its recent election manifesto. However, I don’t have the impression that the party believes rational analysis is for the birds. The party’s policies may not always add up, but it has not abandoned the challenge of grappling with reality.

What would be a barrier to ministerial effectiveness would be a failure, once in government, to listen to and engage with the best advice available

It is not the role or wish of civil servants to frustrate the wishes of government. Equally, however, the role of civil servants is not confined merely to carrying out the instructions of their political masters and their political advisers. It is about more than helping them mechanically to implement their programme for government. Good civil servants must give honest, informed and sometimes courageous advice, without fear or favour. Ministers should take account of that advice before taking decisions and expecting civil servants to implement them. If ministers fail to listen to experienced, professional and well-intended advice the country will be the loser.

It is not the machinations of civil servants that sometimes frustrate the ambitions of ministers. As we have seen recently in the UK, it is the complex reality which they bring to the table.

Campaigning rhetoric is not in itself a bar to being a good minister. What would be a barrier to ministerial effectiveness would be a failure, once in government, to listen to and engage with the best advice available.

If Sinn Féin were at some point to enter government, they would face a fundamental choice. They could proceed, like Patel and her colleagues, as if they were riding into town with unchallengeable populist answers. Or, while seeking to advance their core principles insofar as any coalition agreement would allow, they could consider the issues afresh in all their complexity. If they were to do that, as I hope they would, the civil service would be there to help them.

1 Trump turns to bible for photo op as DC burns around him
2 Covid-19: Easing of restrictions ‘unlikely’ to be speeded-up
3 Normal People: Full-frontal nudity was not its most radical feature
4 Body of missing five-year-old recovered from Lough Mask, Co Mayo
5 ‘Frustrated and angry’: Thousands march in Dublin to protest death of George Floyd
Real news has value SUBSCRIBE