Recommendations of the McMahon Report must now go to taskforce 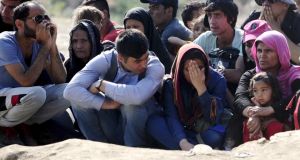 Migrants wait on the Greek side of the border to enter Macedonia, en route to northern Europe on July 20th. Photograph: Reuters/Ognen Teofilovski

In the first six months of this year, according to UNHCR, 137,000 people have made the journey across the Mediterranean. We are unsure of how many people have drowned making this perilous crossing. The actions of the Irish Navy have saved several thousand lives. With most, if not all, regular migration channels to European Union countries closed to citizens of the Middle East and Africa, 67,000 people sought sanctuary through Italy, 68,000 through Greece in the last six months. The vast majority of those arriving in Italy and Greece are Syrians, Afghanis, Iraqis, Somalis and Eritreans.

To put this into some perspective, Ireland, from January to the end of April 2015 has received just 1,114 new applications for refugee protection. It has been reported that Ireland is to take 600 Syrian and Eritrean asylum seekers over the next two years, as part of a co-ordinated EU response in assisting Italy and Greece meet their international obligations to provide protection (in addition to the 520 migrants the State is already accepting as part of a separate resettlement initiative for migrants residing outside the EU). These latest 600 asylum seekers, whom UNHCR Ireland have stated would most likely meet the stringent international legal definition of refugee, will be placed in the direct provision system in Ireland, until their asylum claims are assessed.

That the people who will be prima facie entitled to refugee protection will be forced to endure direct provision, is yet another condemnation of the isolating and punitive direct provision system. The Working Group on the Protection Process and Direct Provision, chaired by Dr Bryan McMahon, suggested a range of practical measures to improve Irish law, policy and administration of the Irish protection system.

A core issue that the McMahon Report examined is the length of time that individuals have to remain in the status determination system for their protection claim. Recognising the significant problems with status determination processes and procedures in recent years, the McMahon Report called on Government to introduce (in effect) a near amnesty for those whose refugee claims have not been determined within a five-year period. A similar recommendation is made regarding those on a non-effected deportation order who have been in the system for five years.

The McMahon report contains strong recommendations on ensuring the best interests of the child are met in deciding a child’s claim for protection. While the McMahon report also recommends an increase in the weekly allowance for asylum seekers and their children, there is no recommendation on extending entitlement to child benefit to children in direct provision. The McMahon Report calls for a large number of further reviews, including nutritional audits, a committee to determine living standards that those in direct provision should be entitled to; as well as sensitivity and cultural awareness training for direct provision centre employees, social workers and other support staff.

The recommendation to extend the remit of the Ombudsman and Ombudsman for Children is to be welcomed. However, the Reception and Integration Agency, the body responsible for accommodating asylum seekers, stated that it would take at least two years to implement some of the recommendations, and that the space required to implement the living conditions recommendations may not be available in the current housing market. One of the most strikingly limited recommendations comes in relation to children and the preparation of school lunches. “Within six months”, the McMahon Report states, “existing centres which do not have units with cooking facilities, subject to any contractual obligations, [should] facilitate...” parents or children making their school lunches.

The Working Group’s remit was limited from the start, with its terms of reference calling only for “recommendations on improvements” to the direct provision system, not for the abolition of direct provision.

While the McMahon Report, I feel, adequately addressed some key concerns as regards status determination procedures, the report fails to provide a proper rights-based analysis on living conditions in direct provision.

The recently announced “task force” on implementing the McMahon Report recommendations has been called a “betrayal” of asylum seekers in direct provision, by one of the members of the Working Group, NASC, the Irish Immigrant Support Centre. The establishment of such a task force indicates a refusal by government to accept the recommendations of the McMahon Report, even though a majority of members were appointed from government departments.

The McMahon Report, even if the recommendations are implemented, continues the system of degradation and intimate control over other human beings lives, which continues to be the hallmark of direct provision in Ireland. Direct provision will be the céad míle fáilte that awaits Mediterranean and other asylum seekers seeking sanctuary in Ireland.

Dr Liam Thornton is a lecturer in law in UCD and a member of UCD Human Rights Network. Further analysis of the McMahon Report is at www.humanrights.ie