We all love budget day but surely it is now well past its sell-by date? 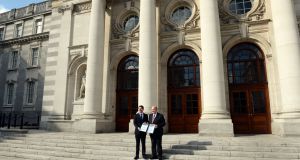 It’s the time of year for articles saying that budget day should be abandoned. But in truth we do all enjoy the intrigue and the drama, the leaks and the spin– and, of course, the winners and losers. Budget day is just what it always has been – an annual excuse for every interest and lobby group to put pressure on their local TD, minister and the government for a share of whatever goodies they perceive might be available. And we love it.

A few days on, however, this year’s production does seem almost irrelevant. The childcare and housing measures aside, it won’t make much difference to most people. Some will get the price of a coffee a week, others enough to buy a couple of extra pints. Meanwhile, the country is facing the uncertainty and upheaval of Brexit and a collapse in sterling which could have massive implications for our economy.

One budget was never going to deal with Brexit – but maybe that’s the point. The world is complex and volatile and the whole budgetary process is designed to deal with simplicity. Brexit is a long-term problem. The budget can only offer short-term solutions.

The new politics made the pre-budget dance worse than ever – and all the compromising and pre-publicity did take a bit of drama out of the big day. A government with a majority might have had the confidence to make at least some decisions in its first year in office. But one with a minority is inevitably beholden to its political opponents – who themselves merely want to be able to claim a few political “wins”.

The new structure in which an Oireachtas committee heard from Ministers, officials and outside experts before the budget led to a final report – published just before budget day – which deserved the old schoolteacher response “could do better”.

This was meant to be a way to bring transparency to the process and have a decent debate before the budget. It was a good idea which didn’t work.

So if we continue the way we are going each budget is going to be just like this week’s one – a big row over a relatively small amount of money.

This year we argued about €1 billion – which became €1.3 billion. But total spending each year is €55 billion. A huge and impressive job was done by a couple of ministers and some senior public servants in halting the rise of spending during the crisis. But now we see huge pressures to “restore” public sector pay and spending – and taxes – to pre-crisis levels. The nonsense about abolishing the USC lives on. Plainly, going back to pre-crisis spending and tax arrangements would be madness.

Instead, reform is needed to deliver better value for money. We need to be talking about the € 55 billion, not just the €1.3 billion.

Minister for Public Expenditure and Reform Paschal Donohoe has promised a comprehensive review of spending. It is the right move, but can the new politics deliver any decisions as a result?

From concentrating specialist medical care in key centres, to developing universities, to how best to help families, the debate keeps getting stuck in the argument of who wins and who loses, rather than how best to spend what we have.

And the system seems badly placed to deal with the tsunami of public sector pay claims.

‘Deliver’ for the locality

But modern government is complicated and reforming tax and spending programmes is messy and detailed work, ill-suited to the kind of headline grabbing we see from all sides around the budget. And then Brexit brings a whole set of complex challenges which, in fairness to the Government, are far from straightforward to deal with. Can the political system react to this?

Faced with these kind of challenges, the budget day show is an anachronism. But the media and public lap it up and the whole political system is driven by it for a couple of months. We could call for a continental European-style system of committees and discussions and long-term planning instead. But sure that would only take the fun out of it. Like an old soap opera, the Irish budget day will just go on and on.

1 Gardaí suspect botched murder attempt was bid to avenge Mulready-Woods death
2 Who are Ireland’s 17 billionaires?
3 Election 2020: FF edges ahead of FG as SF surges in new Ipsos MRBI poll
4 Rob Delaney: ‘As my career took off, my son got sick ... And then he died’
5 Gerry Thornley: Saracens very late to apologise for repeated cheating
Real news has value SUBSCRIBE